During his time on Parks and Recreation playing the sweet clueless oaf Andy Dwyer, actor Chris Pratt was known to improvise lines occasionally. While Pratt is credited by series co-creator Michael Schur as coming up with the best line of the show that he improvised, the actor had one particularly crude improv line that he’s not especially proud of — a joke about Kim Kardashian and her sex tape. 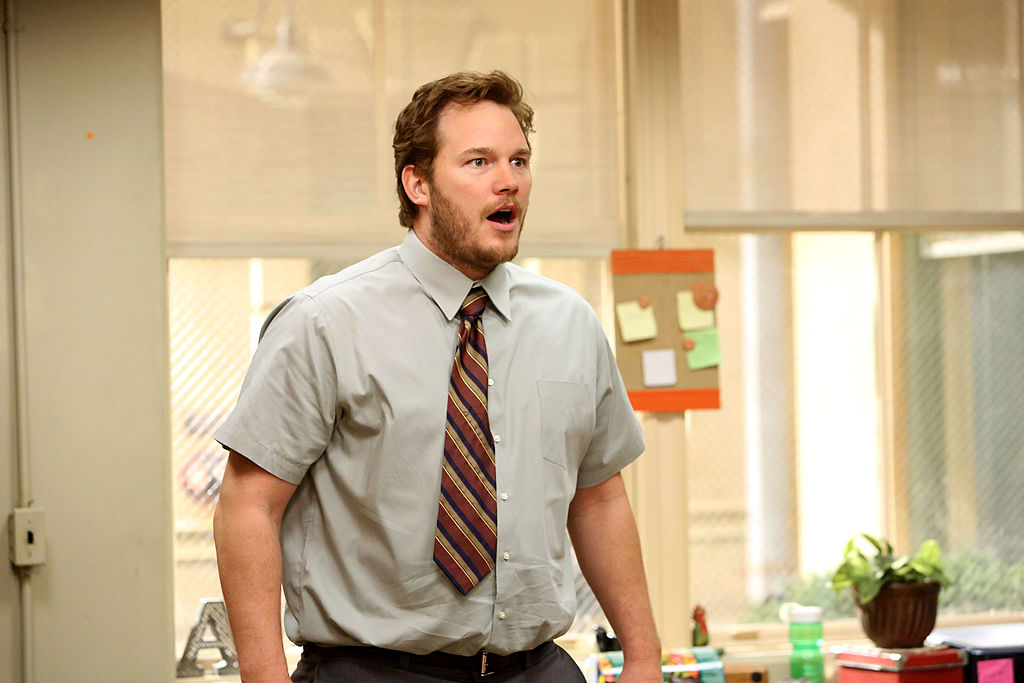 Pratt improvised one of the best lines on ‘Parks and Rec’

During the PaleyFest panel for Parks and Recreation in 2012, when the cast was asked how much they improvised on the show, star Amy Poehler shared that it wasn’t as much as people would think because the writing is so good. Even so, the cast had their moments to spin a few ad libs and see if they would land.

According to Schur, Pratt came up with comedy gold when he improvised the line that he looked up Leslie Knope’s (Poehler) flu symptoms.

“I would also say that every person in the cast has had improvised material in the show… in my opinion… the funniest line ever spoken on our show is improvised by Chris Pratt when Leslie has the flu,” Schur shared during the panel.

“Leslie, I typed your symptoms into the thing up here and it says you could have network connectivity problems,” Andy tells his boss in the scene.

Schur said of the improvised line, “And I’m not kidding, as a writer, it made me furious. I’m still really upset and angry. He did it once, the camera happened to be on him, he did it once… I think it’s the funniest joke that’s ever been on our show. It’s my favorite joke.”

Pratt once made a raunchy joke about Kardashian

One of Pratt’s improvised lines wasn’t quite suitable for primetime TV, however, and though it would never make it in an episode, it lives on forever on YouTube.

It’s impossible to not #awesomesauce April and Andy. #ParksandRec @PrattPrattPratt

RELATED: What Made Chris Pratt’s ‘Parks and Recreation’ Audition So Unforgettable?

He felt bad about making a joke at her expense

His castmates cracked up about the dirty joke but Pratt said he felt bad about it, telling GQ in 2015 that he doesn’t typically “make jokes at other people’s expense.”

Pratt had actually worked with the reality star in the past, sharing a brief scene with Kardashian in 2009’s Deep in the Valley, a movie he called “not good.”

“She’d never really done an acting gig before,” Pratt told GQ. “She was so f*cking sweet, and she was nervous.”

When he ran into her on an airplane years later he said he hoped to go unnoticed because of the joke he made about her on Parks and Rec. “It was a very, very funny joke,” he said, but he had asked that it not be included on a gag reel because it was in such poor taste. The request, however, was forgotten about and though he did receive an apology for that oversight, any hope of keeping it from the public was shattered.

“So it’s really kind of a bummer,” Pratt explained. “She probably doesn’t know or doesn’t care, I’m sure, but I don’t like to make jokes at other people’s expense, if I can help it.”

He added, “I like to keep my jokes about people safely way behind their backs. I’m a sh*t-talker, but if I’m gonna make a joke at someone’s expense, I’ll do it so that they can never hear it.”

Tags: and, Parks, Recreation&#03
You may also like
Recent Posts