Home
TV and Movies
Money Heist season 5: Is Tokyo the only one to survive? Fans predict heartbreaking ending

Money Heist gripped viewers when it returned for its fourth season on Netflix at the beginning of April. However, some fans have been wondering how the series will come to a final end, and what role Tokyo (played by Úrsula Corberó) could have in all of this?

Will Tokyo be the only survivor of Money Heist?

Tokyo was introduced as the main character of the popular series in season one.

Fans first met her in the first episode when she was recruited into the Professor’s (Álvaro Morte) new gang of thieves.

Since then, she has played a huge part in the Spanish drama as well as being at the heart of a romantic storyline with Rio (Miguel Herrán).

And, as fans will know, Tokyo is also the narrator of the whole series so far. 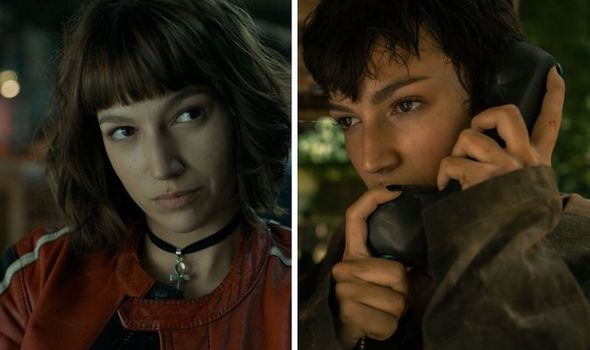 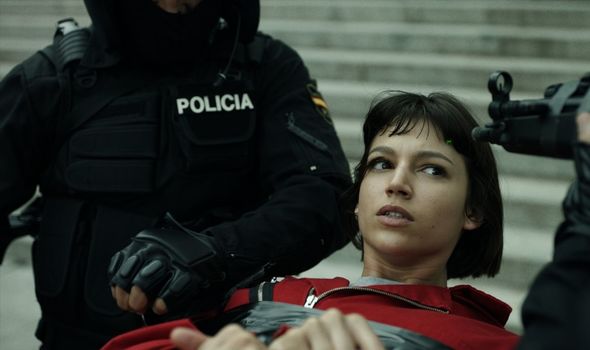 Ever since it first began, it has been her voice describing who the characters are and what was happening.

Some viewers have been speculating about what the point of this is with a heartbreaking new theory as to why it is her telling the story.

Posting on Twitter, fan @ciiehl wrote: “What if at the end of La Casa de Papel, Tokyo will be the only gang member alive and that’s why she’s narrating all the current seasons.”

This is partly based on the fact Tokyo has been narrating the show in the past tense throughout. 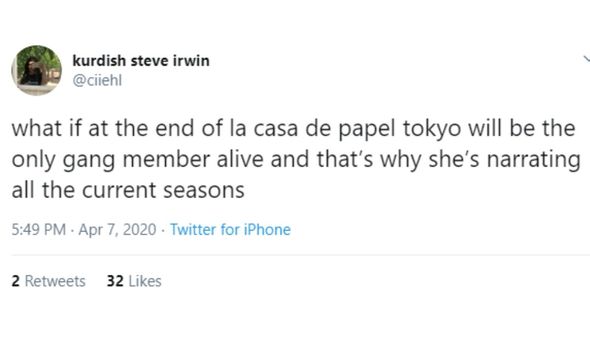 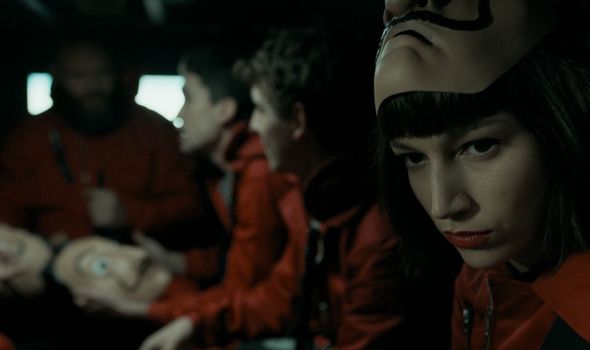 In many of the seasons she has also given clues as to what is to come throughout her narration.

This included in the first outing when she spoke of “Rio… He’s my weakness” before fans knew of any romance between them.

As well as this, at the end of part three, she teased “And then it was war” ahead of the dramatic fourth season.

This has all led fans to believe she could be narrating the show from a point in the future.

However, not everyone is convinced this means she is the only one left alive.

Viewers have also taken to Reddit to speak about the possibility of the theory, as well as other explanations.

One popular idea from Every_username_used is: “My personal theory is she’s telling the story from prison.”

However, another fan named Raven15716 has speculated she might become the new Professor.

They explained: “Maybe she acts like the new Professor and narrates to a new team their past heist.

“Then this could set up for a new series or something, kinda like a spin-off.”

Viewer c_o_r_b_a also speculated how she could be alive after all but may be dying as she tells her story.

They wrote: “We know she’s alive at the time she’s talking, and we know it’s after the events of what she’s currently talking about, but we don’t know the details.

“It could be that in a future scene, she’ll start narrating and then we’ll transition to the present and see she’s trapped in some situation and just mulling over everything that led up to this situation right before she dies.

“And her being alive doesn’t indicate anything about the status of all of the others.”

There are so many theories about the meaning of the narration but it seems like fans will just have to wait for the series to return for any answers.

Production has reportedly been put on hold for the fifth season of the show following the outbreak of coronavirus COVID-19.

However, there has been no official announcement yet from Netflix on its return yet.