Home
TV and Movies
Matt Hancock cut off by Good Morning Britain heckler: ‘Never happened to me before’

Good Morning Britain hosts Ranvir  and Ben spoke to Health Secretary Matt Hancock today as he returned to work after catching coronavirus. But the interview was thrown into turmoil as Matt was distracted by someone heckling him “nice things,” and he admitted that never happens.

Last week it was announced that Hancock had coronavirus and had been isolating at home ever since with his family.

Singh asked how he was doing during his recovery from the nasty virus that is sweeping across the globe.

Hancock explained: “It’s really good to be back and I feel fine and I was able to work but it was a nasty illness.

“I had two days or so when I had razors in my throat and I lost half a stone so it was pretty nasty. 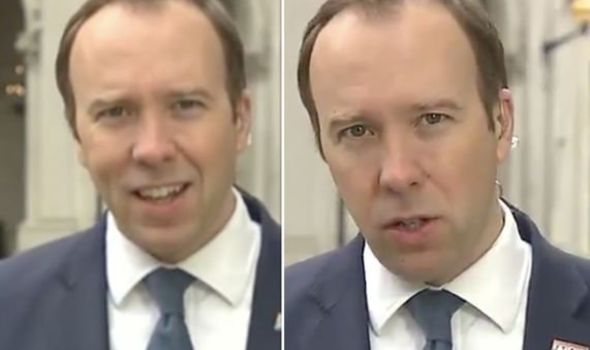 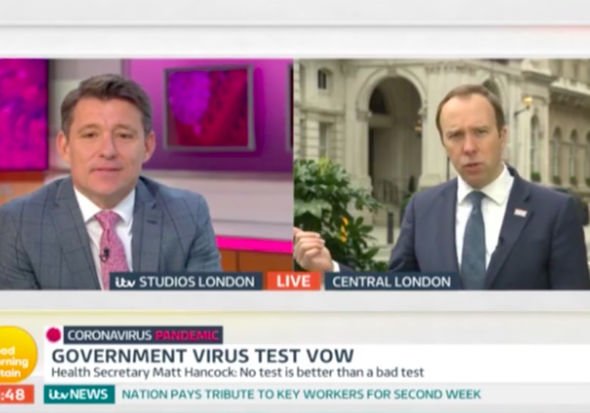 “The worst bit was worrying how bad it could get and it seems indiscriminate. It takes people younger than me so that was worrying but luckily I have come through it.”

The conversation centered mostly around the subject of coronavirus testing after Mr Hancock revealed last night that mistakes had been made, but the government was working hard to get the correct tests implemented.

Singh went on to ask if Prime Minister Boris Johnson had over promised 25,000 coronavirus tests.

Hancock explained: “I think that’s a bit unfair. You are right that all that matters is getting the response right and listening to complaints. 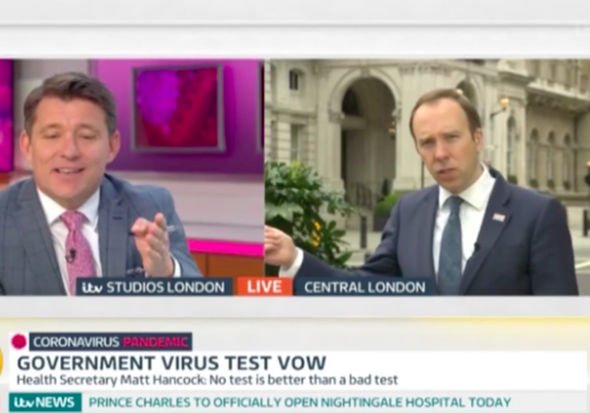 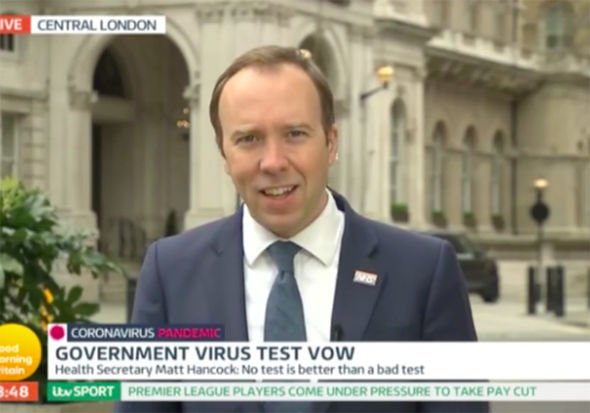 “But the commitment to getting testing to 25,000 a day still stands but I laid out the timeline and said 100,000 tests is the goal at the end of this month and that’s going to take a mammoth effort.”

Shephard moved the conversation onto criticism over the lack of PPE (Personal protective equipment) for frontline workers.

“I think you’ll agree that PPE has been sketchy. I know a lot is coming,” he began.

“Just before you came on we spoke to some care workers who said that they don’t have an PPE, despite care homes being on the front line.

Hancock replied: “Yes it’s incredibly important we have the stocks and the military are there to roll out the equipment.

“Yesterday we made new guidelines for PPE and that includes care homes. We have deliveries but I want to get to the point where no one has a shortage.”

However, Hancock was cut off as the interview was interrupted by a heckler.

“I am really sorry I was distracted by someone who was heckling nice things,” he told the hosts.

“They are shouting ‘Matt Hancock is great,’ which has never happened to me before.”

Shephard joked: “Have you taken your family with you on this live, are they there somewhere?”

At the end of the interview Singh said they would try and get rid of the heckling next time.
Mr Hancock laughed: “There are worse hecklers in life, I can tell you.”

Good Morning Britain continues on ITV on Monday at 6am.