Kaye, 57, joined the Loose Women panel from her home while soap star Kelle, 45, was in the studio where Christine Lampard, 41, hosted the debate on Shamima Begum. The Court of Appeal ruled earlier this week the 20-year-old, who fled to Syria in 2015 to join the IS terrorist group, should return to the UK to challenge the decision of her British citizenship being revoked. It was only last year The Home Office removed Ms Begum’s citizenship, despite it being claimed by lawyers the schoolgirl was groomed to leave the country, as they said she wasn’t “stateless” with The Special Immigration Appeals Commission explaining she was “a citizen of Bangladesh by descent”. However, the two ITV presenters got very heated as they discussed the reports.

Starting the debate, Kaye said: “We don’t know exactly what went on and it would be useful for us to know.

“So it’s not a case of Shamima Begum is going to come back and she’s going to walk free and go back to her life and create havoc if indeed that’s her intention.

“She’s coming back to face justice and we should all want to defend justice and make up our mind once we know the facts rather than based on what’s a really convenient story for the Government because they haven’t covered themselves in glory here.

“It is very inconvenient for them to have us all pile on a young woman who at the age of 20 has had three lost pregnancies and the two friends she went with, let’s remember, had been killed in drone attacks.”

Kelly then added as she disagreed on a few points: “I’ve watched a couple of the interviews she did and she didn’t actually in my opinion show remorse.” 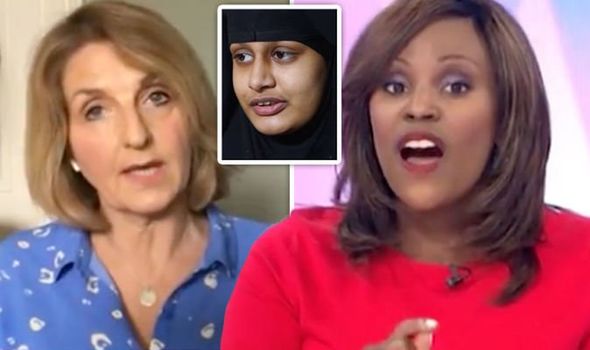 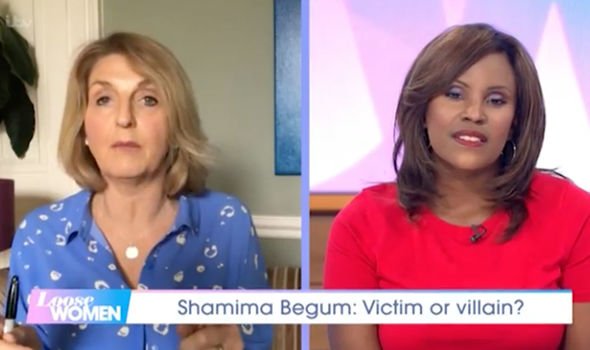 As Kaye went to jump in, Kelle cut her off as she told her co-star: “Give me a second,” before continuing with her explanation.

Agreeing with her fellow panellist on one particular point, the soap star added: “We’re absolutely not aware of what’s going on behind-the-scenes of where she’s being interviewed and the situation she’s actually in – that I understand.

“My point is we’ve got to look at the damage that’s been caused in our country and we have to reflect upon that.

“She’s said all she’s done wrong is going to Syria, actually there’s evidence to show she’s made the garments which have been used for suicide bombers to [use].” 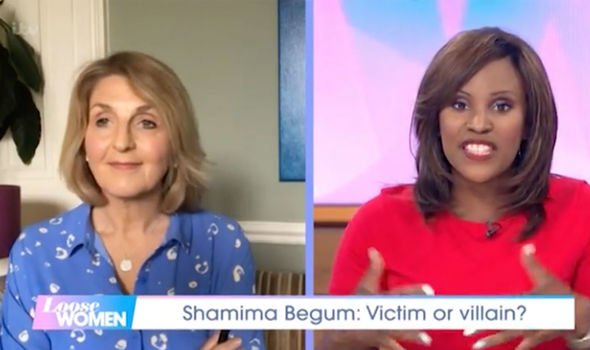 Give me a second

“Rather than cherry-picking the little bits that we’re being fed,” she continued, with Kelle stating she agreed with her co-star on the matter.

The soap star said: “I do think she needs to come back and I do believe she does need to be tried.

“But equally, I think the British public have a right to feel uncomfortable about that,” the panellist remarked.

The Court of Appeal made their decision earlier this week as they claimed Ms Begum had been denied a fair trial in the UK.

Former Home Secretary Sajid Javid, 50, said he was “deeply concerned” by the ruling, going on to issue a statement on Twitter.

Explaining why Ms Begum’s citizenship shouldn’t be reinstated, the politician wrote: “Any restrictions of rights and freedoms faced by Ms Begum are a direct consequence of the actions she has taken, in violation of both government guidance and common morality.

“It is not clear to me why an appeal could not be made abroad using modern technology,” he continued.

Defending the ruling, Ms Begum’s solicitor, Daniel Furner, told the BBC: “Ms Begum has never had a fair opportunity to give her side of the story.

“She is not afraid of facing British justice, she welcomes it. But the stripping of her citizenship without a chance to clear her name is not justice, it is the opposite.”

Human rights organisation Liberty has also welcomed the ruling after they intervened on Ms Begum’s trial over the right to a fair trial.

Liberty lawyer Katie Lines told the BBC: “Banishing someone is the act of a government shirking its responsibilities and it is critical that cruel and irresponsible government decisions can be properly challenged and overturned.”