Home
TV and Movies
If You Think Peter and Kelley Aren’t Dating After Analyzing This Evidence, You Are, Frankly, Wrong

Remember back in February when Peter Weber’s season of The Bachelor aired? I believe it was approximately 10 years ago? Yeah, well, he’s still out here having the ~most dramatic season ever~, and the damn show isn’t even on anymore. As a reminder, Peter got engaged to Hannah Ann Sluss:

Then he dramatically broke up with her:

And then he got back together with Madison:

Only to break up with her, like, two days later:

You’d think Peter would want to take a break from romance after ending two relationships back-to-back, but apparently not, because now he’s out here dating Kelley Flanagan. Or, at least, it seems safe to assume they’re dating based on a literal mountain of evidence that we’re about to dive right into. It all started during the “Women Tell All”….

Kelley posts this photo, proving that she was in Los Angeles during The Women Tell All taping. This will become important in a moment!

Love celebrating my birthday weekend with these girls! ❤️❤️

Meanwhile, the internet realizes that every single member of Peter’s family is following Kelley on Instagram. Sus.

The “Women Tell All” airs and fans immediately notice that Kelley is missing. Which seems extremely weird considering she was in L.A. during the taping? If you were lurking on Bachelor fan accounts around this time, you probably recall people being convinced that Peter and Kelley were secretly hooking up and that producers didn’t want her in the audience because it’d give away the ending.

The live “After the Final Rose” special airs on ABC, and for some reason, Kelley is in the audience. Bachelor Nation remains convinced something freakin’ weird is up.

That’s a wrap! What a great experience and will always be grateful for the opportunity to join season 24! ❤️

Peter’s mom Barb slides into Kelley’s Instagram comments to make it CRYSTAL CLEAR who she wants her son to be with (reminder: he’s dating Madison at the time). She straight-up calls Kelley “The Most Beautiful, Elegant, Classy, Intelligent Stylish Girl in the world!!!!” 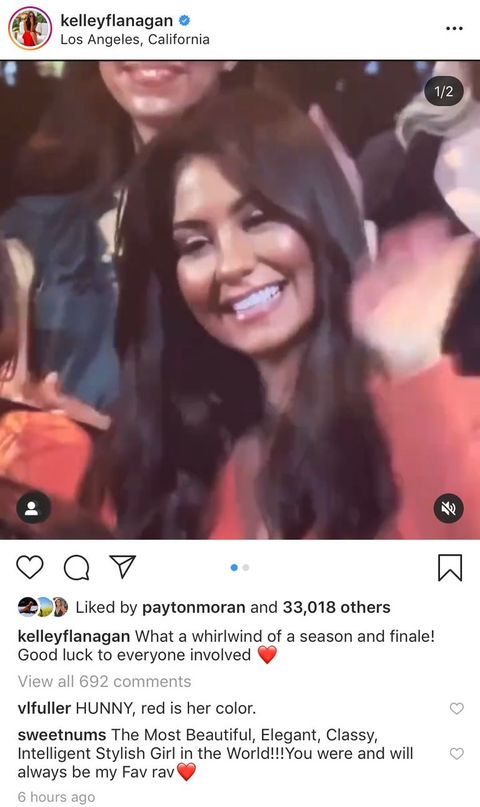 Reality Steve addresses rumors that Kelley and Peter are hooking up:

Photos drop of Kelley and Peter hanging out in Chicago while everyone is supposed to be social distancing (ugh, guys). He’s caught twirling her over his shoulder, and naturally, Bachelor Nation loses it (including Hannah Ann, who promptly deletes all her IG photos of Peter):

Peter, Kelley, and Dustin currently hanging at the Riverwalk in Chicago. Pics and videos are making the rounds so I’m sure you’ll be seeing these pop up on sites soon… pic.twitter.com/ltD2qMixdm

Okay, a LOT goes down on this fated day. Not only do fans figure out that Peter’s been posting TikToks from Kelley’s house based on the freakin’ rug he’s standing on:

He goes ahead and tags her in this Insta video:

On top of that, fellow Bachelor Nation star Clay Harbor (who chilled with Peter and Kelley in Chicago) blows up their spot during Instagram Live, straight-up saying “yes” when asked if they are dating:

A post shared by Steph Liquigan (@stephanieluvjtanddisney) on Apr 1, 2020 at 9:46pm PDT

As of now, Peter and Kelley haven’t told fans if they’re officially official—but we can all agree that the evidence adds up, right? Cool, now excuse me while I go eat my third lunch of the day.

Tags: and, If, Kelley, Peter, Think, you
You may also like
Recent Posts