From her haunting vocals to her raspy cadence, Golden Globe winner Andra Day is wholly absorbed as the title character of “The United States vs. Billie Holiday.” Her visceral performance is the anchor through which Pulitzer award winner Suzan-Lori Parks and filmmaker Lee Daniels’ drama comes to life. The 1940s-set film reshapes Holiday’s legacy as the Godmother of the Civil Rights Movement, centering her activism through her seminal song “Strange Fruit.” It also showcases Federal Bureau of Narcotics Commissioner Harry J. Anslinger’s (played in the film by Garrett Hedlund) obsession with dehumanizing and silencing Holiday, and how he weaponized her drug addiction against her.

While the movie has been met with mixed reviews, Day’s performance has been routinely hailed as a major breakthrough for the Grammy-nominated singer, who had never played a leading role before in film or TV. In the wake of a recent Golden Globe win and the movie’s Hulu release, she is now on track to score a Best Actress Oscar nomination, making her one of the few late-breaking additions to an awards season that runs into April.

For Day, who based her stage name (her real name is Cassandra Monique Batie) off the legendary singer, the transformation into Holiday has led her to a place she never expected. She is only the second Black woman in history to win a Golden Globe Award for Best Actress in Drama (the first was Whoopi Goldberg for her work in “The Color Purple”). “I think we always want to celebrate those historical things, which we should because it does matter,” she said in a recent interview with IndieWire. “At the same time, I look forward to the day that it’s just normal. I’m so honored, and I’m happy. But 35 years should not have gone by with Black women feeling inadequate in this category.”

Day said she ran from the role — her first major on-screen undertaking — but sees it as a gift. “We owe [Billie] a debt of gratitude,” she said. “It taught me that Black women often fight in silence to be celebrated and honored. She was able to stand up there and sing ‘Strange Fruit’ and defy the entire U.S. government while bringing awareness to this culture of lynching in America.”

Parks envisioned this new take on Holiday after reading Johann Hari’s book “Chasing the Scream,” which examines the government’s War on Drugs from World War I to the present. “It allowed me to talk about Billie Holiday and Black America’s relationship with America,” Parks said. “It really gave me an opportunity to talk about how Black excellence is often rewarded with persecution.”

It may have always been Day’s destiny to cross paths with the legendary singer. The 35-year-old’s stage name (she was born Cassandra Monique Batie) is a direct link to Holiday’s nickname, “Lady Day.” Day can even recall the first moment she heard that timeless voice as a young girl.

“I remember the first song I heard was a song called ‘Sugar’ and the second one was ‘Strange Fruit,’” Day said. “I was just confused. I was like, ‘This sounds nothing like the Whitney Houstons or the Gladys Knight or the Arethas.’ Her tone was haunting and beautiful. I would say it felt like a roller coaster. With ‘Strange Fruit,’ I was just frozen. I felt bad for her; I felt sad for her. I knew that whatever she was singing about directly related to me.”

Parks’ connection with Lady Day also began in her childhood years. “My mom would play Billie Holiday records,” she said. “She’d say things like, ‘They got to her, you know.’ I never knew quite what that meant. Then you grow up, and you realize, ‘Oh, America does that to Black people who are succeeding. They take them down a notch or two.”

When developing the script, Parks researched every possible angle. “I read everything I could find on her,” Parks said. “I looked at photographs. I listened to ‘Strange Fruit,’ but also the fun and beautiful songs she would sing like, ‘Life Begins When You’re in Love’ or ‘Pennies from Heaven.’ It’s imperative for people to know that instead of being just a drug-addicted, attractive siren blues/jazz singer, people got to know that she was a soldier. She kept singing and speaking truth to power.”

When it came to bringing Parks’ words to life, Day’s approach was to step into Holiday, both body and soul, shedding 40 pounds to match the singer’s slimmer frame and taking up drinking and smoking to add a grittier texture to her vocal sound. Such physical transformations are often hailed during awards season, but Day grappled with how it would impact both her off-screen and on-screen life.

“I prayed heavily about it, and I had peace about the weight loss, the drinking, the smoking, the cussing, the yelling,” Day said. “I think it was more difficult for my family to process what was happening. My only concern going into it was making sure that it was as accurate as it could possibly be without being an impersonation. I have to say, God is great, I would do all of it again, and I would do it exactly the same way.” 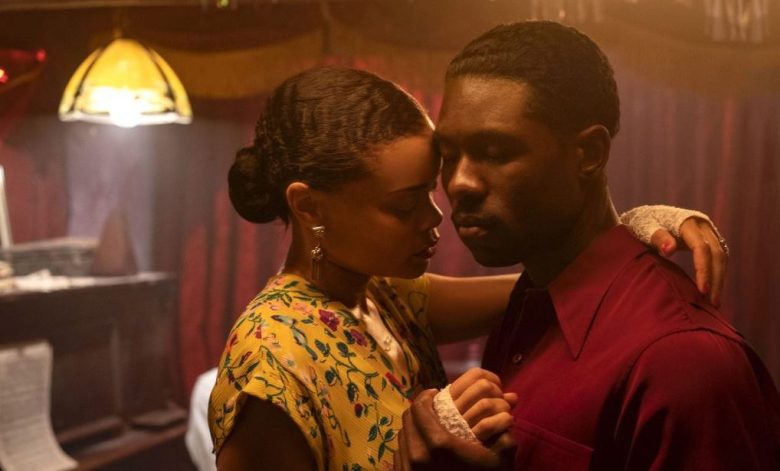 “The United States vs. Billie Holiday”

In addition to Holiday’s legacy and Parks’ words, Day credits her acting coach, actor-director Tasha Smith, for guiding her transformation. “[Tasha] gave me so much,” Day said. “She had to teach me the craft of acting in such a short period of time. One of the biggest gifts that she gave me was to be present and to be fluid. Then to have Suzan-Lori Parks’ incredible words. You can’t say enough about Black women telling Black women’s stories.”

As vastly different as “The United States vs. Billie Holiday” is in comparison to 1972’s “Lady Sings the Blues” starring Diana Ross, Parks’ intent was to expand Holiday’s narrative outward. “That’s one of my big jobs as a creative person in this universe, to tell the narrative in a way that gives a fair shake to my people,” she said. “Let’s understand [Billie], and not just show one side of her. Let’s understand the societal pressures that were surrounding her. Let’s give her addiction some context because she wasn’t the only drug addict who was a musician. I wanted to tie it to deeper systemic things going on in American culture. There’s the degradation and disrespect going on concerning the Black community, and how women don’t get a fair shake. I feel like the government hated her because she was a strong, powerful, Black woman.”

Despite our triumphs, Black women have had to sacrifice a great deal to exist. No one knew that more than Holiday. “We’re sacrificing so that we can be a support beam for other people,” Day said. “We know the overarching oppression and suppression of our voice and our value. People need to change the way they think when it comes to Black women. I think we’re seeing more and more and more of it. Black women are changing the way they think about themselves and each other, and I think it’s just beautiful. “

“The United States vs. Billie Holiday” is now streaming on Hulu.

Tags: Andra Day, Consider This, inte
You may also like
Recent Posts