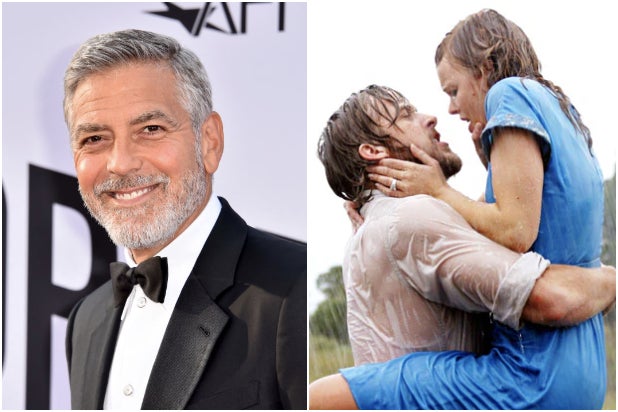 It still isn’t over, George Clooney! Could you imagine Clooney standing in the pouring rain saying those lines? Because the actor revealed he was almost meant to star in “The Notebook” as Noah, the part made famous by Ryan Gosling in the 2004 romance.

Clooney recently said in promotion of his latest film “The Midnight Sky” that he would star in an adaptation of the Nicholas Sparks novel “The Notebook” alongside Paul Newman, who would play Clooney in his old age. But the actor says the project fell apart when he realized that both he and Newman look nothing alike.

“Paul and I talked about doing it, and we were sitting there one day and I was looking at him and I go, ‘I can’t do this movie, Paul,’” Clooney told Entertainment Weekly. “He was like. ‘Why?’ I was like, ‘Because everybody knows what you look like at 30 years old. You got blue eyes, I got brown eyes. You’re too famous at 30 for me to be playing you at 30, it’s never gonna work.’ And he’s like, ‘I guess you’re right.’”

Clarifying further in similar comments made to Deadline, Clooney said he first met Newman and instantly knew they wanted to work together, but he became intimidated after watching some of his older films.

“He’s one of the handsomest guys you’ve ever seen. We met up [again] and I said, ‘I can’t play you. I don’t look anything like you. This is insane,’” Clooney told Deadline. ‘We just wanted to do it because we wanted to work together, [but] it ended up being not the right thing for us to do.”

In the 2004 “The Notebook” that did make it to the screens and has become a weepy classic, Gosling plays the young man in the film and James Garner plays his older half in modern day. Rachel McAdams also stars as Gosling’s love interest, and Gena Rowlands plays the older woman now suffering from dementia.

It’s unclear when exactly Clooney was attached to “The Notebook,” but Sparks’ novel came out in 1996.

Tags: almost, Clooney, George, Starred
You may also like
Recent Posts
This website uses cookies to improve your user experience and to provide you with advertisements that are relevant to your interests. By continuing to browse the site you are agreeing to our use of cookies.Ok