Home
TV and Movies
Gamechangers in Box Office History: How ‘The Matrix’ and ’10 Things I Hate About You’ Broke the Rules

Easter weekend is always a holiday, with kids home from school eager to enjoy movies: last year saw three family films open in the top nine, as well as wide-appeal “Captain Marvel” and “Shazam!” (This year, folks are watching movies from home.)

But 21 years ago, Easter weekend broke box office rules. First, it was a ballsy move for Warner Bros. to greenlight the Wachowskis’ original and complex science-fiction actioner “The Matrix” in the first place, much less release the R-rated movie opened on that family holiday.

But the risk paid off. The eye-popping movie starring Keanu Reeves ended up blowing away all previous grosses for the holiday weekend (without counting Wednesday opening results). All told, “The Matrix” took in nearly $68 million for its first five days (in adjusted gross). Even the three-day result was among the ten-best in box office history.

And it wasn’t the only film that had a lasting impact that weekend. Disney’s “10 Things I Hate About You,” a high-school romantic comedy loosely based on Shakespeare’s “Taming of the Shrew,” scored some $21 million for its first five days.

Both “Matrix” and “10 Things” still have passionate followings decades later. What sets them apart from many similar titles with cult reputations is that they were successes from the start — on Easter. Memories can be fleeting: I knew “Matrix” was a success, and “10 Things” did OK, but it’s fun to review old records.

Today, “The Matrix” would be next to impossible to produce, unless an A-lister like Christopher Nolan or James Cameron demanded it. But Warners production executive Lorenzo Di Bonaventura banked on the Wachowski siblings, giving them a high-end budget, based on their script for Sylvester Stallone hit-man film ”Assassins,” and their directing debut with kinky indie heist thriller ”Bound,” which was a modest success for Gramercy ($7 million).

While the Wachowskis were the geniuses behind “The Matrix,” Warners entrusted the production to their reliable nuts-and-bolts action producer Joel Silver (“Lethal Weapon”). Rooted in multiple influences, “The Matrix” drew from evolving theories on machine/human interaction (as the internet was entering daily life), Hong Kong genre films (martial artist choreographer Yuen Woo-ping was a crucial collaborator), and Japanese Manga plots and characters.

Key to its success was casting Keanu Reeves to play computer programmer Neo. Coming off a five-year stretch of underperforming films, Reeves was not the studio’s first choice. But even his less successful films revealed an athletic edge that enhanced his credibility to audiences, which he has maintained with such entries as the “John Wick” franchise.

With decent reviews and word of mouth boosted through the extended holiday, the public responded enthusiastically worldwide. At a time (pre-China) when action films normally saw 40% or more domestic business, “The Matrix” was 63 percent foreign, nearly as much as that year’s Bond film “The World Is Not Enough.” The domestic gross ended up quintuple the opening five days, with the twisty plot and detailed alternative universe encouraging multiple repeat viewings. Its adjusted domestic take passed $300 million, fifth best for the year, with worldwide, over $850 million. In 2003, the first of two sequels performed even better. So far the adjusted worldwide theatrical take for the series is about $3 billion. A long-delayed fourth film is due next year. 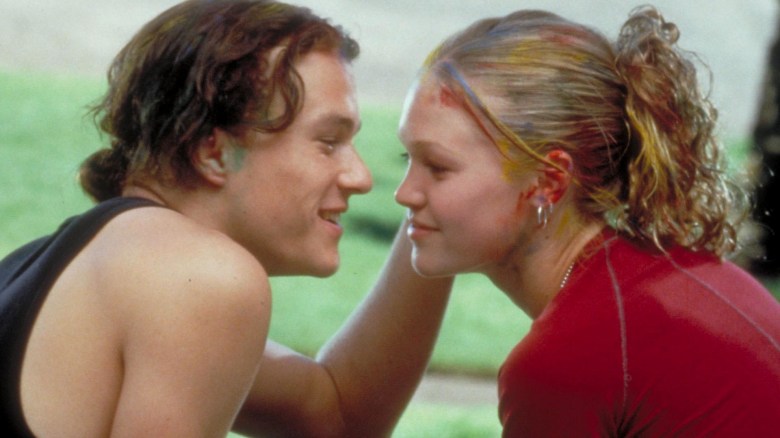 “10 Things” was less of a game changer, but it did elevate three actors: Heath Ledger, Joseph-Gordon Levitt, and Julia Stiles. Ledger was the real breakout after initial success in Australian television and independent film roles.

The high-school romantic comedy is one of the few, following the John Hughes hits of the 1980s, to give depth to its characters, and remains one of the more enduring of the teen genre. It’s notable that Disney in 1999 was not the same as the studio today. While they were family-friendly with animation from Pixar and Disney, the studio’s biggest film that year was “The Sixth Sense.” It’s impossible to imagine them making something like “10 Things” today.

Big-budget Neil Simon remake “The Out-of-Towners” (Paramount) opened nearly as well that weekend, starring Steve Martin in the 1970 Jack Lemmon role, opposite Goldie Hawn. The movie was a disappointment, ending up  adjusted around $50 million. Still, back then comedies were still common studio staples, including four of the nine best live-action releases.

Also still in play were two Miramax Oscar winners on the second weekend after the Oscars. Top winner “Shakespeare in Love” in its fifth month passed $150 million, with Best Actor-winner “Life Is Beautiful” yielding over $80 million, with subtitles (“Parasite” reached $54 million). Different times: the window for home release (mostly video) was longer and both were still playing out only in theaters.

Sign Up: Stay on top of the latest breaking film and TV news! Sign up for our Email Newsletters here.

Tags: 10 Things I Hate About You, Bo
You may also like
Recent Posts