Eva Marcille found out she got her dream job while shopping for underwear. Twice.

“I was in Victoria’s Secret shopping, and I get a phone call, and it’s like, ‘Hey, it’s Tyler Perry…’ I’m like, ‘Oh!’ So I put the G-string down, because I felt like the phone call and the unmentionables…” the actress recalls to ET over video chat, explaining how her involvement with Perry’s new BET+ series, All the Queen’s Men, came to be. “It was definitely a backless pair of underwear that I was holding, and Tyler’s like, ‘Hey, I have an amazing new project, and I think you are perfect for it.'”

“So, this was in March,” she notes. “At the end of October, I get a phone call saying, you remember that role with Madam? Well, they want you back on tape. … I wait, I wait, I wait. My agent FaceTimes me, guess where I am? Victoria’s Secret. Again. I get a FaceTime from my agent and he told me I got the job, it was like absolutely amazing.”

Marilyn “Madam” Deville is Marcille’s character on the sexy new series, which follows Madam — the owner of a male strip revue — as she balances both the on-the-books and off-the-books business of her, um… business.

“My name is Madam and it’s not an accident,” Marcille coos. “Legally I am Marilyn Deville, but my name is Madam because I run a gentlemen’s experience, I would like to say, with a brick and mortar… or with an on-call service. However you like it, if you got the money, I got it.”

“You’re seeing me in a lot a bit of a different light,” she teases. “I must say this role is a dream role for any actor. This is like the role of a lifetime. This is a character who is allowed to be a little bit of everything, and oftentimes you don’t see a woman do a multitude of things. They’re either soft or they’re hard, or they’re this or they’re that. But see, Madam is a boss, so she is versatile and she needs to be some things at all times. So, you get to see the rough edges. You get to see the nice, smooth, charismatic side.” 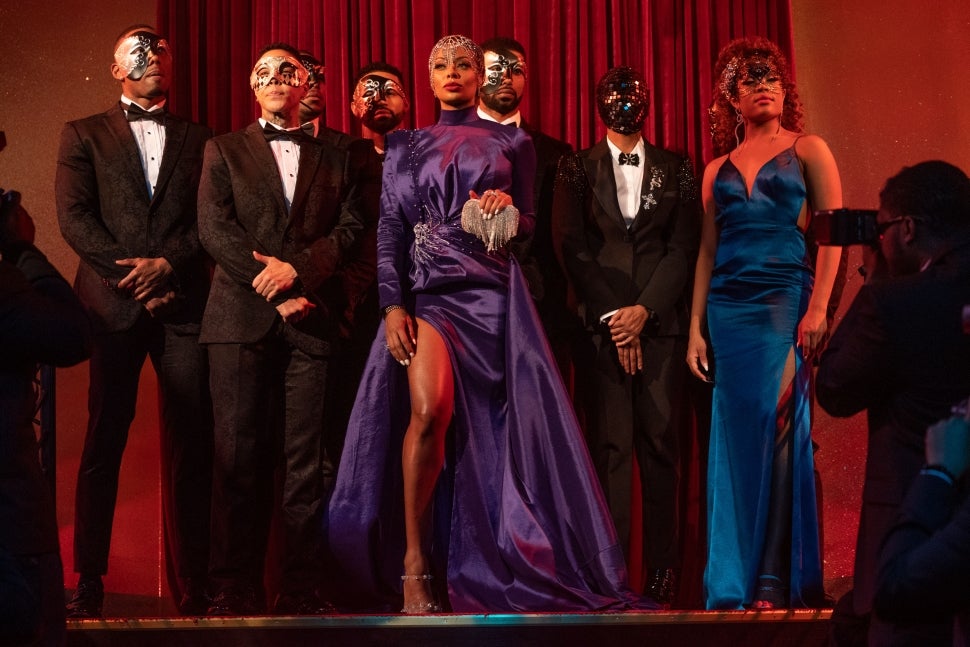 “You get to see the gangster, the ruthlessness,” Marcille explains. “You get to see the protector, the dream she has for herself. And I think that’s one of the things that we all have in common, is the fact that we all have some kind of a dream for ourselves. And we put it at the top of a mountain and we spend our lifetime journeying to that, and that’s what you see in this show, you see Madam work her way up.”

Marcille admits to going a bit method for the part, smoking specific cigars and drinking very dirty martinis and dark bourbon to get into Madam’s headspace, and she called up actress Lynn Whitfield — known for her similarly soapy roles on shows like Greenleaf and Mistresses — for tips on how to bring Madam to life onscreen. Also helpful is the fact that the show brought in real-life exotic entertainers to fill out the cast, including Michael Bolwaire, whom The Real Housewives of Atlanta fans might know, simply, as Bolo, the stripper who entertained (any maybe more) Marcille’s former RHOA co-stars during a bachelorette trip to South Carolina to celebrate Cynthia Bailey.

“So we shot the show in a bubble at Tyler Perry Studios. The day we checked into the bubble and had a mandatory 24-hour quarantine was the same day as the premiere of Real Housewives of Atlanta,” Marcille shares. “So everyone is, like, sequestered in their little room on campus, and we’re all watching Housewives at the same time, knowing tomorrow we’re going to go meet this guy in rehearsal.”

While Marcille missed out on the Bolo “experience” on Housewives — she departed the series at the end of the prior season — she was aware of what went down, seeing as she is still close friends with Bailey, as well as Kandi Burruss and Kenya Moore.

“There was definitely communicado,” she admits. “I asked Cynthia like, ‘Girl, what happened?’ She doesn’t remember much, it was her bachelorette. And then she left before anything that was to speak of was speakable.”

RHOA viewers (and castmates alike) never got a clear answer as to whether Bolo did, shall we say… overtime with some of the women, as was suspected. Whatever the case, Marcille took it upon herself to clear the air with the entertainer before they got to work on All the Queen’s Men.

“I come from a competition-based reality show, but nonetheless, I know reality television,” the America’s Next Top Model winner notes. “And so I pulled him aside our first day, before we even started filming and we were rehearsing … and I let him know that this is a safe place. We are artists, we are entertainers, and we are here to display the best of ourselves, and with each other we’ll be even greater. I hold nothing against you — I don’t know enough, and even if I knew, I don’t care — and the playing field was just leveled and he was such a leader while we shot, being a veteran in that space.”

“There were a lot of other guys — and I’m ‘the queen’ — they’re scared to even sit next to me,” she continues. “You know, I walk in, everyone runs away. I’m like, it’s lunchtime. It’s, I’m just Eva. But he ended up being a leader for a lot of the men, which was really cool.”

Bolo isn’t the only RHOA crossover happening on All the Queen’s Men. Fellow franchise alum Kim Fields also joined the series, behind the camera. She’s as a producer and directed four episodes for season 1.

“She was so amazing, the only lady director,” Marcille says. “Kim Fields came in there, and baby! First of all, I was terrified, because I know her as Regine [from Living Single], I know her as the lady we all love behind the camera, but to see her now as my director? And as a producer? And knowing that not just my life is on the line, but I’m holding hers, too? Oh my god, pressure, to say the least. But it was absolutely amazing, she has so much grace. She is such a professional, she’s so giving as a director, and she knows what she wants. I pulled my character from her.”

Word on the street is Marcille will soon cross back over to the Housewives universe. ET learned last month that the star is set to join the cast of a second season of Peacock’s Real Housewives mash-up series (now known as Ultimate Girls Trip), alongside iconic ‘Wives including Dorinda Medley, Vicki Gunvalson, Jill Zarin, Taylor Armstrong, Phaedra Parks and Brandi Glanville. Marcille say she can neither confirm nor deny her involvement in the project, though.

“Is that the word on the street?” she quips, playing coy. “You know what? The streets talk a whole lot for a year and a half, shut-down.” 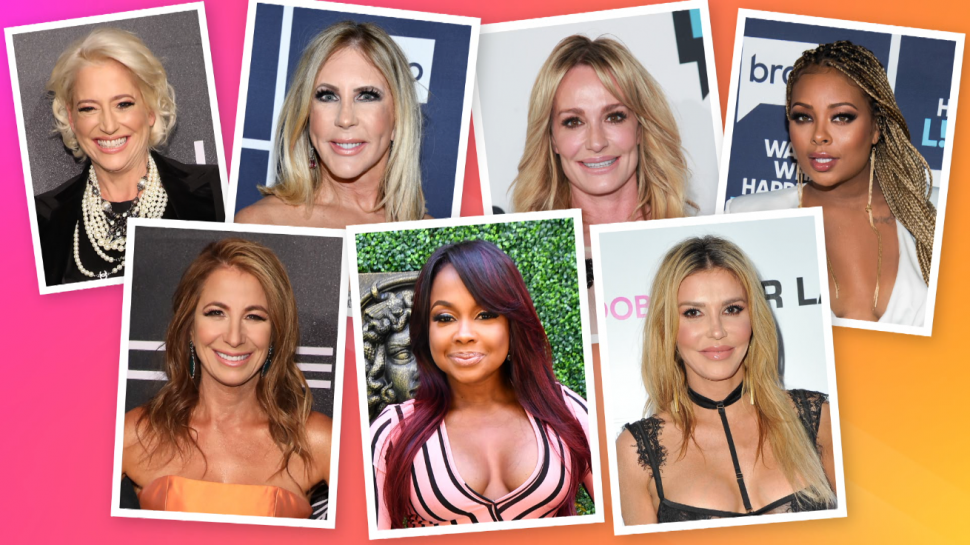 Speaking hypothetically, Marcille says the opportunity excites her because it would be, well, a vacation.

“A vacation,” she reiterates. “I have not rested at all. Which is, I count it all, joy by the grace of God, there go I. I do the news on The Rickey Smiley Morning Show, I talk about how many millions of Americans are unemployed. And so I thank God and my lucky stars for my employment — but if I could go and just relax for a week? Oh geez. Ah! The reason why it wouldn’t work for me is because I’d be asleep the whole time.”

“I’m very grateful for the opportunities that I had,” she says. “You know, when I did Real Housewives of Atlanta, I was pregnant — I had two kids while doing the show — and as much as I love acting, I’ve been acting since Kevin Hill, Everybody Hates Chris, right? The early 2000s, but I was pregnant and you can’t really do much acting. So it afforded me a great job and opportunity at a time where I would most likely be sitting at home, rubbing my belly. So I am grateful to Real Housewives of Atlanta, to Andy [Cohen], more so than anything, because I got Cynthia Bailey from it. Listen, that is my girl, my right and left hands. I don’t know what I did all these years without her.”

“And then I also got Kenya, Kenya Moore from it,” she continues. “I mean, my little cousins asked me to take a picture in my great room because of the piano, the baby grand, that Kenya got me. Like Kenya’s amazing, Kandi Burruss, like, those three relationships alone. I… Housewives owes me nothing, I thank you.” 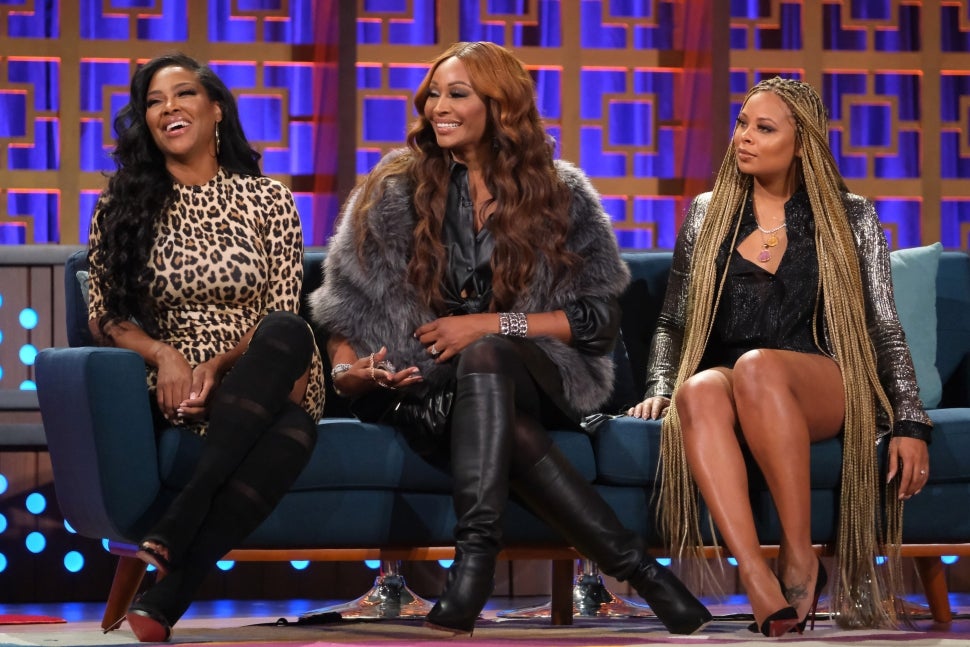 Rumor has it at least one of Marcille’s RHOA besties — Bailey — may be out of a job come the new season of that show. A cast shakeup is expected, with even the supermodel suspecting her time as a peach-holder may be coming to an end. Marcille’s not sold on the idea, though. “Well, then who’s going to do it?” she cracks. “Let’s talk. If Cynthia’s out, then who’s left?”

For now, Marcille is more focused on BET than Bravo, and she promises All the Queen’s Men will entertain viewers — and then some.

“It is boss. It is captivating. It is hot,” she says of her new series. “Listen, church people? Hold your hat on tight and watch it on a Friday night, not on the Sabbath, OK? Because this right here, you’re going to have to repent afterward. It is delicious.”

“I mean, if you’re wearing a wig, make sure you hold onto it tight,” Marcille adds. “Get your wig glued down.”

All the Queen’s Men starts streaming on BET+ starting Sept. 9. Watch the trailer below:

Tags: The R, The Real Housewives, TV
You may also like
Recent Posts