The residents of Emmerdale are preparing for the marriage of Sam Dingle (played by James Hooton) and Lydia Hard (Karen Black) this week. Tonight, ITV viewers will see Sam’s stag do underway, but a knock at the door reveals an awkward mix-up. But for Aaron Dingle (Danny Miller), this could be the start of something new.

Official soap spoilers have revealed how Mandy Dingle (Lisa Riley) makes a tremendous mix up with the stag and hen do plans.

After offering to give her family members the best last night of their single lives, she goes to great lengths to organise a masseuse and whiskey tasting event.

However, it soon becomes apparent when she walks into the throng of giddy ladies at the beauty salon, she has given the events host the wrong address.

Lydia is soon knocking back shots of whiskey while Sam is joined by a male massage therapist. 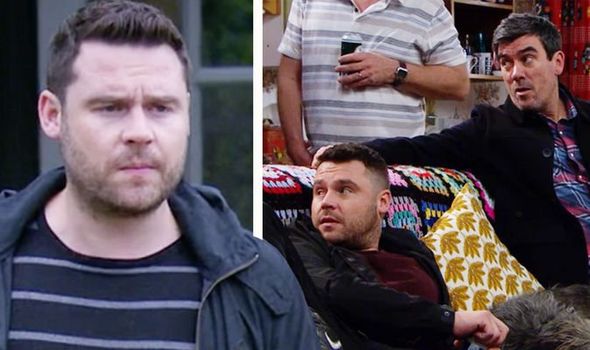 In a preview video released by ITV for tonight’s episode, it seems some might enjoy the mix up more than others.

Arriving to join the other Dingle men, Aaron quietly mutters to Can Dingle (Jeff Hordley): “So they can do without today can they? Will and Billy?”

“Oh good one, you caught me out on that’s clever,” the garage owner remarks.

“I’m going to find out what you’re up to one way or another,” Aaron continues but his uncle states: “Oh, let me know when you do because I’d like to know myself.”

The throng of men was soon interrupted by Eric Pollard’s (Chris Chittel) arrival. 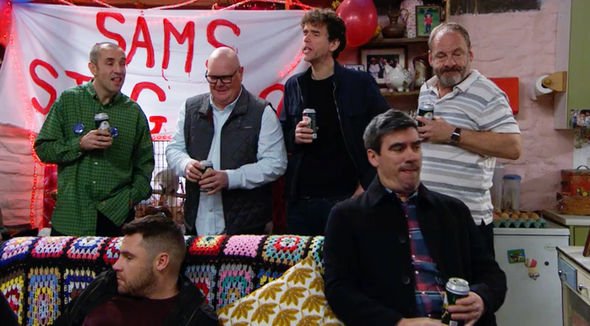 Hearing the comment, Eric fires back: “Excuse me, Sam and I go way back – don’t we Sam?”

“Hey you could say that, thanks for coming,” the groom-to-be remarks.

“I wouldn’t miss it for the world!” Eric replies and then asks: “So what’s the plan?”

“Whatever it was she hasn’t told me, she just said expect a knock on the from the door,” Vinny revealed.

Murmurs then flew around Wishing Well Cottage about a stripper being booked and Vinny said: “It’s a bit tacky isn’t it?”

And Aaron muttered: “Because Mandy’s not tacky at all!”

The conversation was then interrupted by a knock at the door and everyone in the room groaned.

In walked a hunky young man who said: “So this is where the party at…”

And someone commented: “Not a male stripper!” 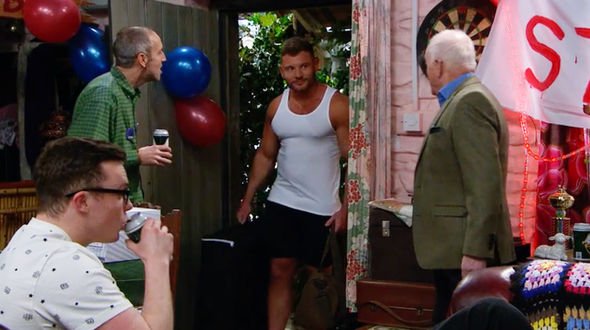 But there was someone who seemed rather happy by the arrival and that was Aaron.

After last year’s heartbreak of husband Robert Sugden (Ryan Hawley) confessing to manslaughter and being sentenced to life in prison, Aaron vowed to stick by his side.

However, divorce papers soon arrived and Aaron spiralled out of control.

With no concrete storyline for the scrapyard manager, could a new romance be on the cards?