Emmerdale fan favourite Declan Macey was a love-to-hate him character.

From domestic abuse plots to a fiery romance with Charity Dingle, he certainly made his mark on Home Farm and the village of Emmerdale as a whole.

Fans are convinced he could soon be making a return to Emmerdale, having never officially been killed off.

Merrells got his first role in 1994 with an appearance in the film To Die For, in which he played a small part.

However, he soon established himself as a successful television actor with his role as receptionist Matt Hawley in the medical drama Casualty.

Daily Star has taken a look at what what has actor Jason been up to since leaving Emmerdale?

It seems life hasn’t always been easy after quitting Emmerdale, as Jason has candidly spoken out about his struggle to find work.

The soap star admitted he was frustrated to watch a phone that “won’t ring” while waiting on news of a casting job.

Taking to social media earlier this year, Jason admitted: "Staring at phone that won’t ring. Waiting on a job. 25 + yrs doing this and it don’t get easier.

He added: "Anyone who has a way of handling this without veering between violent Tarantino fantasies of taking out whole rooms full of execs, and forensic, eviscerating self-critical doubt – I take my hat off to you…" 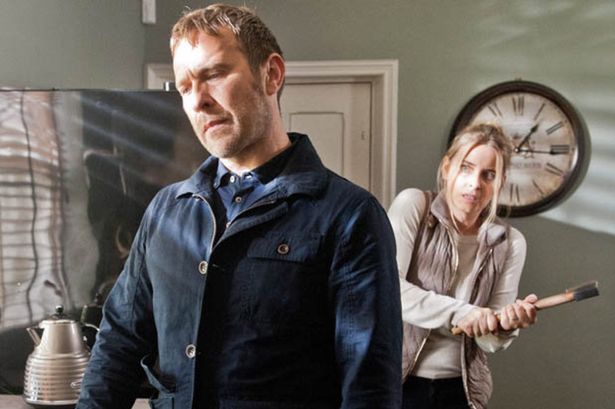 However, things haven’t all been doom and gloom in Jason’s acting career.

He’s gone on to star in plenty of high-profile programmes including Death In Paradise, Midsomer Murders and Agatha Raisin since quitting the Dales.

And before that, he appeared in shows including Queer As Folk and Waterloo Road.

But fans seeing him on Emmerdale for the first time were probably shocked when they clocked the soap he had appeared in before.

Jason played Matt Hawley in BBC medical soap Casualty for a whopping 70 episodes between 1994 and 1997.

As a receptionist at Holby City Hospital, Matt was a kind and caring character – a far cry from Emmerdale’s Declan.

Over the years he was involved in plenty of dramatic moments, including being attacked after giving evidence at Ash’s trial. Jason has two marriages – and two divorces – behind him.

He married his first wife Judith Hurley in 1991, but the pair later divorced in 1999. Jason then went on to marry Zerlina Hughes in 2002, with their marriage coming to an end in 2010.

Now, though, Jason is very happily loved up with his partner Emma Lowndes – and they’ve been together since 2012.

Speaking to The Mirror in 2014, Jason explained why he wasn’t rushing to tie the knot. When asked if wedding number three could be written in the stars, he responded: "I don’t know. There’s a thorny one. We are all right as we are at the moment, I think."

The duo met back in 2009 while touring together in a production of Shakespeare’s Measure for Measure.

Emma, of course, has her own lustrous acting career – having appeared in shows like Downton Abbey, the BBC adaptation of Jane Eyre and Cranford.

She also has some pretty famous family connections outside of her partner – her younger brother Nathan was a professional footballer for clubs like Leeds United and Watford before he retired in 2013. Jason, who originally hails from Epping, was incredibly busy during last year’s lockdown as he began extending his huge countryside property.

The actor also proved that he’s skilled beyond working on the small screen, as he regularly tries his hand at art, with his home scattered with impressive pieces.

He even created a life-sized replica bust of his youngest daughter Martha from clay, which he snapped standing proudly in his living room. Jason also has an art studio of his own at home, stocked with impressive canvas paintings and other arty equipment befitting a painter of his skill.

The house itself has a very rural feel, with wooden floors and floral furniture dotted about to give it a homely element.

But most impressive of all is the huge wooden treehouse in his back yard – built entirely by hand. With steps decked out with blooming greenery, the treehouse features a cute window and is perfect for whiling away the summer months with his kids.

Jason also shares the family home with his gorgeous pooch Ziggy, who regularly features on his Instagram page.

Blessed with a huge garden, Jason had an inflatable paddling pool set up last summer, with a sweet outdoor patio for dining and a long couch for stretching out on.

And his house features a huge set of barn doors which open out onto a more modern glass-fronted entrance.

Tags: Casualty, Emmerdale
You may also like
Recent Posts