Home
TV and Movies
Black Widow: Breaking Down How VFX Helped Bring a New Level of Grit and Emotion to the Action

Director Cate Shortland (“Berlin Syndrome”) brought a grittier violence to the MCU, which impacted the visual effects involving Natasha/Black Widow (Scarlett Johansson) and her adopted family. This included holding on shots longer, keying on the color red, and using visual motifs to make emotional connections. The best example tied the embers during the destruction of the Red Room to the fireflies at the beginning.

“The fireflies was a kind of surreal moment that we often don’t have in the big MCU films,” said Marvel VFX supervisor Geoffrey Baumann (“Black Panther: Wakanda Forever”). “I think [Cate’s] vision with that was trying to maintain an innocence that was part of Natasha’s character, but also merge that with the grittiness that you might find in a ‘Bourne’ or a Bond or a ‘Mission’ type of film. The collaborative process was a learning experience that went both ways.”

Shortland discovered how to best integrate VFX seamlessly into the visual framework and Baumann discovered how to create more of an emotional context to the action. It all came together in the third act destruction of the infamous Red Room: the flying fortress of super baddie Dreykov (Ray Winstone), puppet master of the Black Widow assassins. 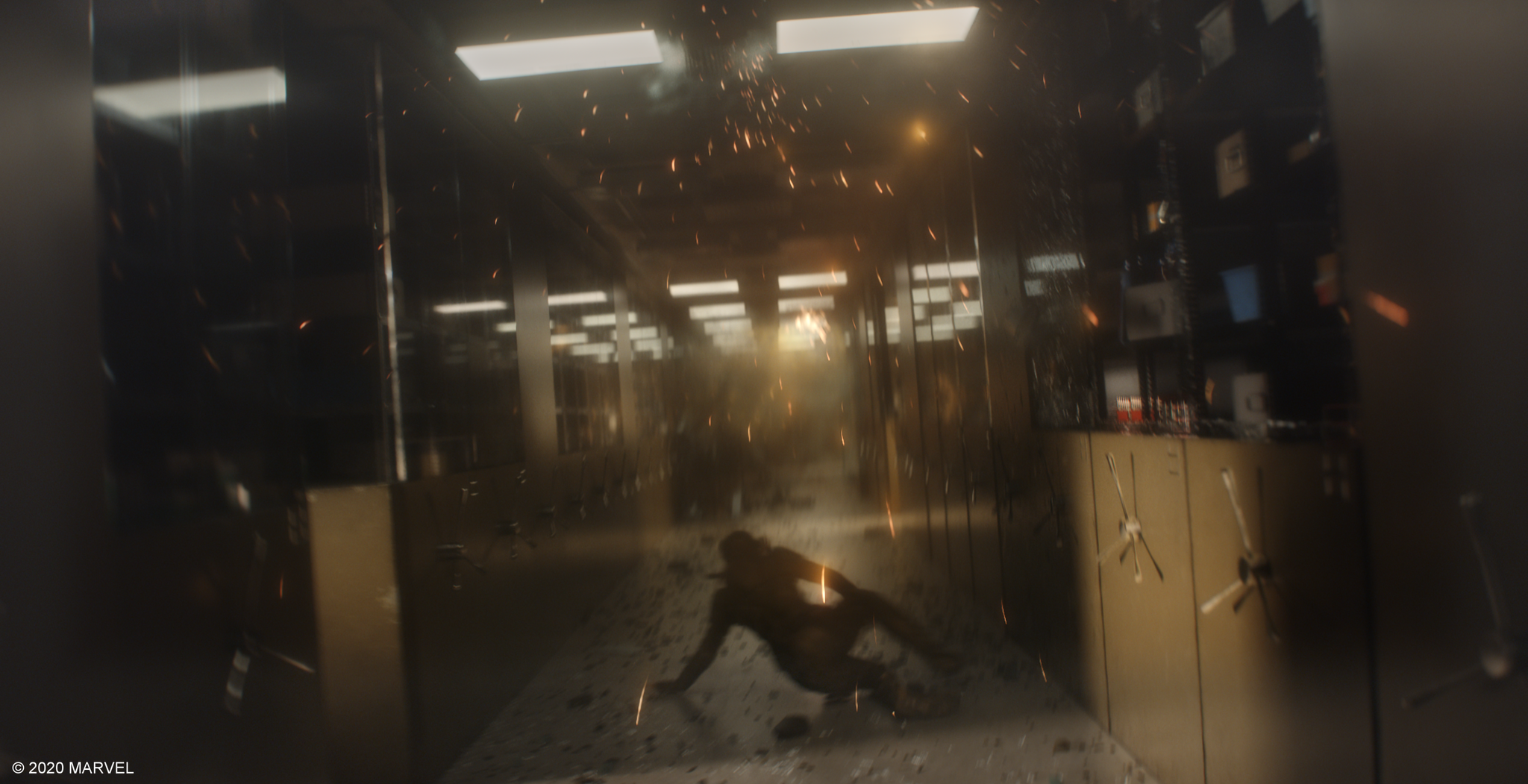 “It started with [production designer] Charlie Wood’s Brutalistic architecture, and then we looked at oil rigs and heavy industry equipment and implemented that into the design,” added Baumann. “The Red Room needed to be imposing and somewhat of a lost space. We played with static electricity and lightning during the descent, with lots of color within the smoke. As the arms break off, we identified which legs to emphasize and break apart through action beats running simultaneously, knowing where we were overall in the destruction, and we efficiently repurposed simulations.”

Digital Domain handled most of the interior destruction, including the embers and smoke, assisted by Trixter and Cinesite, but created all of the exterior mayhem, which involved substantial Rigid Body Dynamic simulations to break apart the massive lair alongside the explosions. 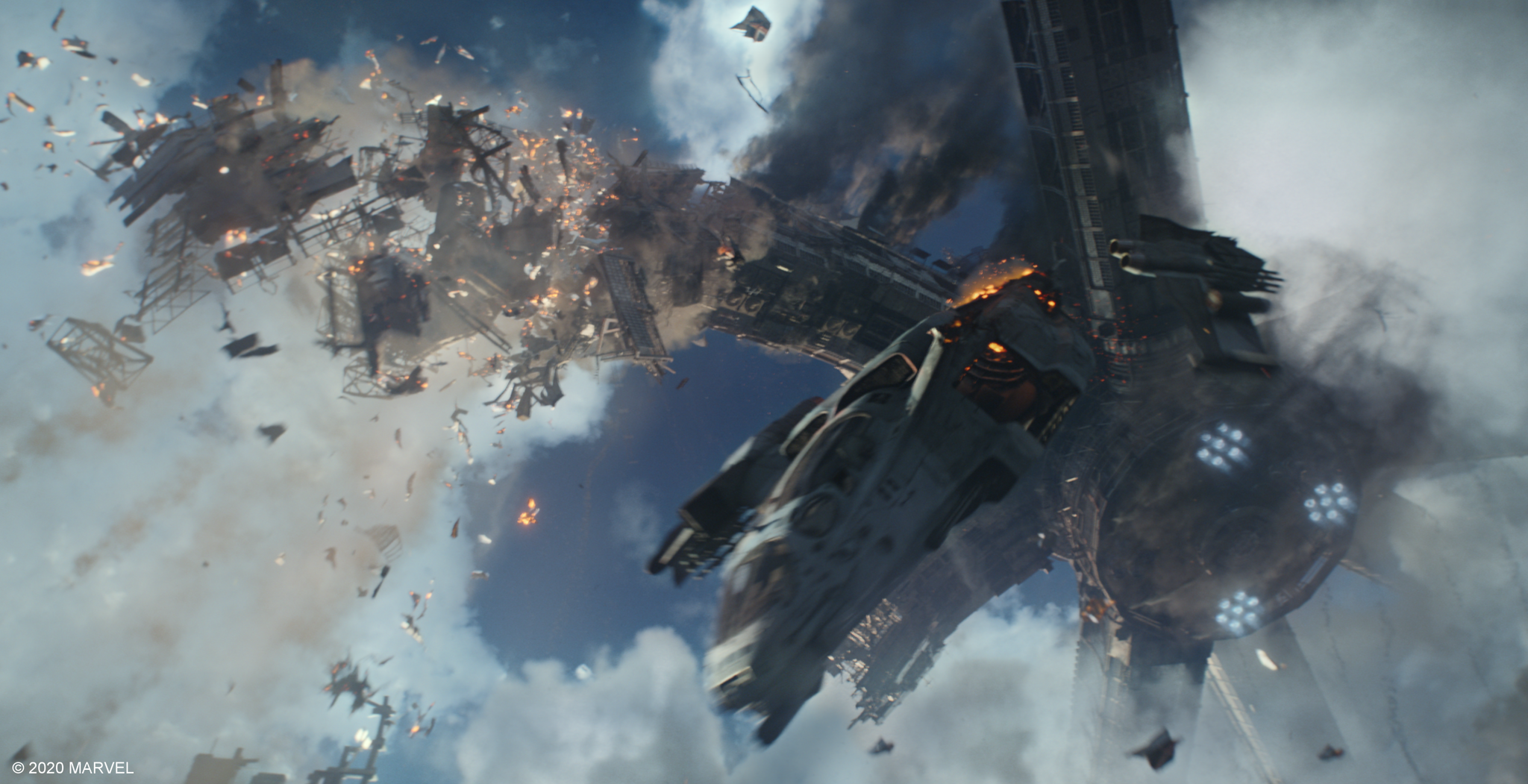 Additionally, Dreykov’s control room included a desk console projected in the room, indicating the extent of his global web of Black Widows. The predominantly red-colored graphics were done by Perception with Industrial Light & Magic helping with the design of the projector. “There was a balance of trying to have light in the lens and light shafts traveling right to left and left to right, but, at the same time, not obscuring the actors and the action,” said Baumann. “There was a lot of exposition told through the graphics display, and his character got more creepy as we dug deeper into how he destroyed free will.”

Then came the free fall and skydiving action sequence (also handled by Digital Domain) with Natasha, her sister Yelena (Florence Pugh), and Taskmaster/Antonia Dreykov (Olga Kurylenko). For this, they merged skydivers in a UK wind tunnel with skydiving footage, wire and robo arm work on a green screen stage, and CG digi-doubles. This culminated in a crash landing with more stunt work and digi-doubles. 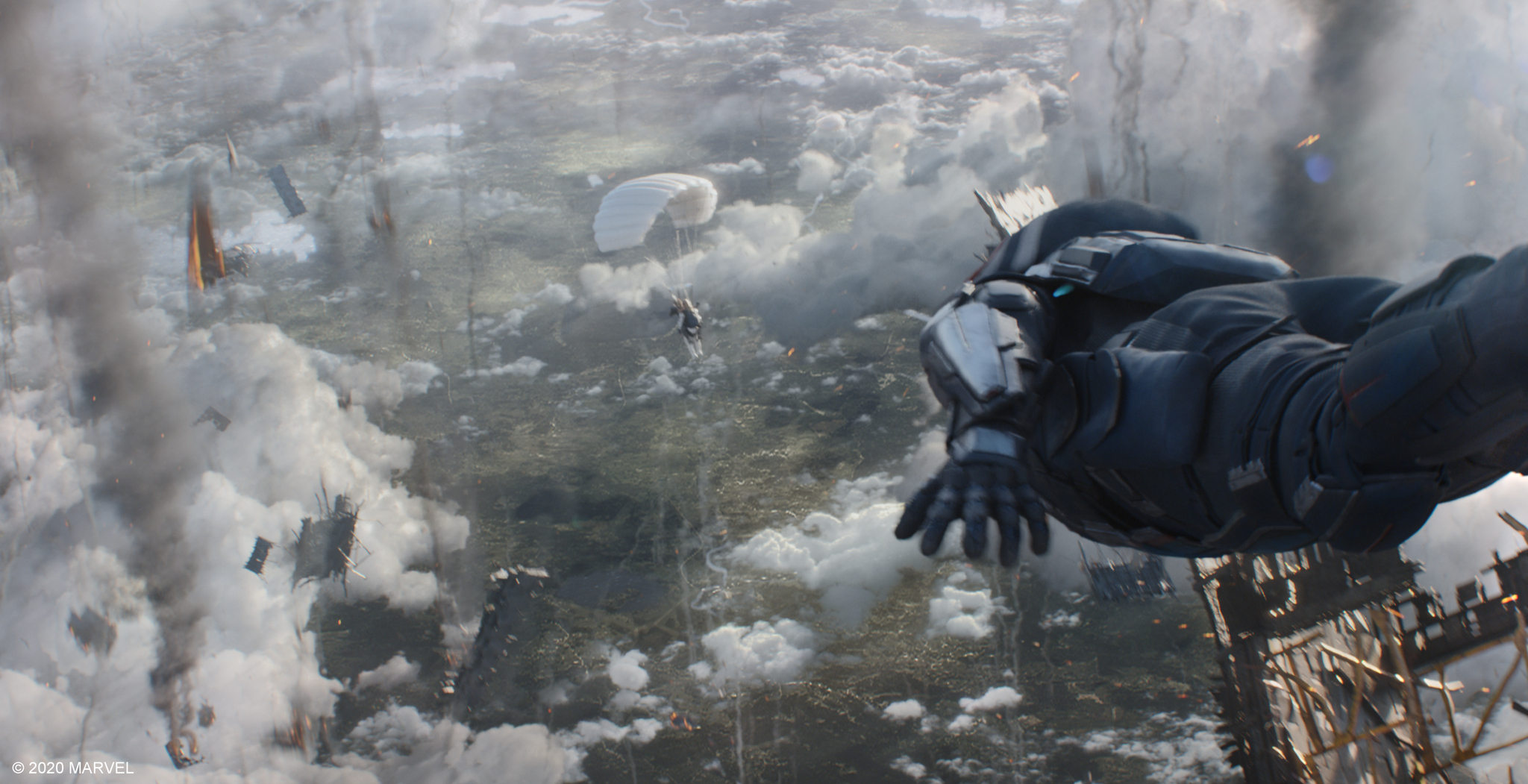 Originally, though, Dreykov and his cohorts were part of the sequence, but Shortland and Marvel realized that it was more compelling to swap Taskmaster for her father. However, that meant Digital Domain had to redo a portion of the VFX as the delivery deadline approached. “Overall, DD helped us identify the [switches] and worked well with us to keep it consistent, and reworked some of the original photography,” said Baumann.

For the family reunion at the end, the presence of embers again came full circle back to the fireflies. “Underneath all this spectacle and action, it was exciting to work with a different kind of director and help her with her journey into visual effects,” added Baumann.