Home
TV and Movies
‘Americans are direct!’ Lorraine hints at reason royal staff didn’t get on with Meghan

Lorraine Kelly was joined by Royal correspondent Russell Myers in her studio to discuss all the latest news from inside the palace. Over the weekend, it was reported the Buckingham Palace inquiry results of Meghan Markle’s ’bullying’ could be delayed until 2022. But Lorraine had her own theory as to why Meghan potentially clashed with palace staff; because of the industry she worked in and the directness Americans have compared to the British.

“It might just be different cultures,” she said. “You know, Americans are very direct, they’re like the Dutch, they’re really direct.

Russell added: “She was from the Hollywood background, go and get them, up at 4.30 am, sending off emails.” 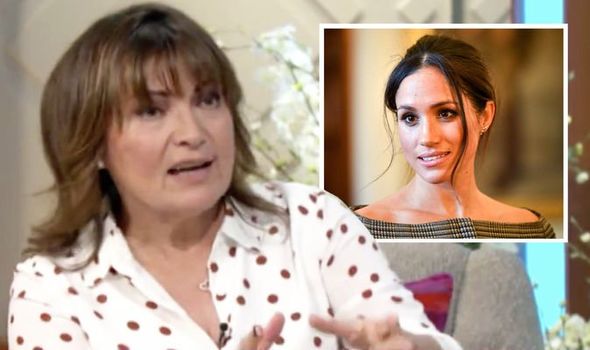 It comes after the palace are investigation allegations Meghan bullied two senior staff.

The claims surfaced publicly in March this year, and the palace responded by saying they were “concerned” at the reports.

Meghan and Prince Harry claimed it was a “calculated smear campaign” and fiercely deny any wrongdoing.

The couple’s former communications chief, Jason Knauf, reportedly submitted an email alleging unacceptable behaviour by the Duchess in 2018 where she “was able to bully two PAs out of the household”.

Another former aide complained they had been personally ‘humiliated” by the Duchess.

An unnamed source told PEOPLE: “For [some staffers] there was real stress and real trauma.

“These are real people and there is a human toll.”