Home
Lifestyle
Will The Coronavirus Be The Tipping Point That Makes People See Influencers As The Small Businesses They Are?

This is Please Like Me, BuzzFeed News’ newsletter about how influencers are battling for your attention. You can sign up here.

The great escape from New York will become content 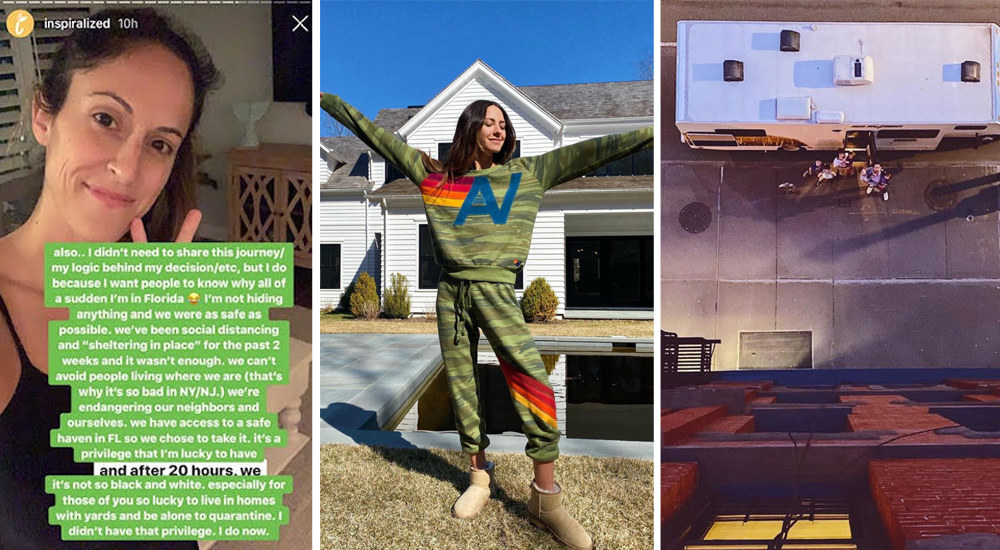 In the midst of the coronavirus pandemic, many people have been looking for someone to channel all their fear and anger at. This week, influencers were the target.

That’s not to say they didn’t deserve it. On Monday, I wrote about a debate raging all weekend online. Naomi Davis, aka Love Taza, packed her five kids into an RV on Friday, right before the CDC instituted a travel ban on the New York metro area, and headed west. People were, rightfully, pissed off. I spoke to two experts who said this was a terrible idea in the middle of a pandemic — and could possibly lead to more people being unnecessarily exposed to the virus.

I got a ton of messages from readers about other influencers who were traveling against CDC guidelines on my Instagram (where, shameless plug, I am always happy to discuss influencer drama with readers and frequently post things that don’t make the newsletter). Arielle Charnas, aka Something Navy — who, as I wrote about a few weeks ago, was diagnosed with COVID-19 — traveled to a house in the Hamptons despite the fact both she and her husband were infected, which set off a HUGE firestorm. Food blogger Ali Maffucci, better known as @inspiralized, also has been under fire for traveling this week from Jersey City to Florida to quarantine in greener pastures. Clea Shearer, one of the founders of the Home Edit, used an RV to travel from California back to her Nashville home this week. Other influencers and YouTubers have been called out for doing non–social distancing activities like getting their nails done, taking trips to Tahiti, or just being out of touch. This bad behavior and subsequent public shaming has earned them write-ups in Jezebel, Vanity Fair, and the New York Post.

There has been a lot of discussion about how irresponsible these influencers are or are not being, how this is indicative of their privilege and wealth, and the like. I’m not going to rehash those here. Instead, I am wondering if this is a moment of reckoning for the industry at large.

For many years, I have railed against the notion that influencers are not worth reporting on or that I am being petty by covering them because they are not public figures. Many successful influencers, especially old-school mommy bloggers, still cling to the notion that they are just regular, everyday people who just happen to “share their lives online,” and therefore are undeserving of criticism from the media or their audience. Never mind the fact that, Naomi for example, has huge partnerships with Target, DSW, and Fairmont Hotels, among many others. Or that both Naomi and her husband, Josh, make their income entirely from their blog and ad partnerships, and have for many years.

Knowing this, their response to this drama makes a lot of sense.I will give Naomi credit for acknowledging that she is a public figure and that anything she says “is going to be ripped apart.” She insists that her decision was right for her family and seemed to imply that was the most important thing.

Ali from Inspiralized was even more blunt, telling her more than 200,000 followers that she, frankly, didn’t owe them anything. “I didn’t need to share this journey/my logic behind this decision/etc, but I do because I want people to know why all the sudden I’m in Florida,” she wrote.

Arielle took responsibility in a long post on her Instagram account on Thursday, writing that she understood she had made mistakes and is under scrutiny because she decides to put herself in the public eye. She defended her actions, though, as ignorance, not malice. She also posted a tearful Instagram story saying she “let down her community.” (I wrote a lot more about her case specifically in a story yesterday.) 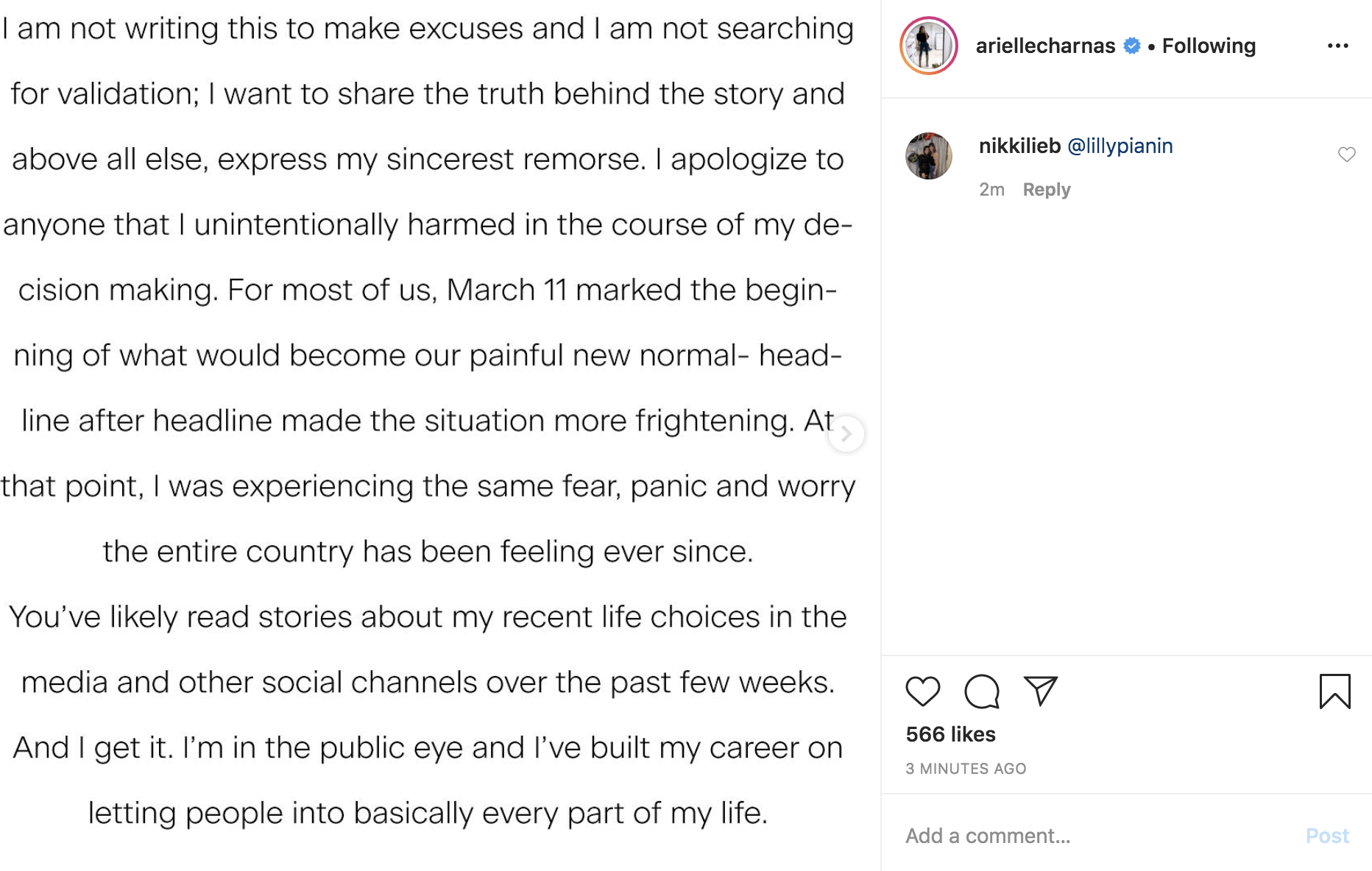 I wonder if this is going to be the tipping point for a lot of people in how they view these influencers. Even now, many people still view them simply as friends in their feed who just happen to offer aspirational photos or helpful advice. But they are not.

Influencers are public figures with small but flourishing businesses who make their money based on the trust and devotion of their audience. Therefore, they have a responsibility to said audience and their advertisers. Influencers should probably use their ~influence~ for good. And if they don’t, they should be held accountable for their actions.

Private citizens can make all kinds of bad decisions in the pandemic (but please don’t) without any sort of public consequences. But influencers give up that right when they sell their lives for profit. If they mess up, they will likely suffer the consequences of lost ad revenue and partnerships.

Slowly but surely, people are starting to realize that by following an influencer, you are a consumer of their small business. I’d therefore challenge you to follow those people who are navigating this turmoil in a way that you respect. And if you don’t like what someone is posting, use your power as a consumer to unfollow.

It Happened to Me: I Got Addicted to Making TikTok Dances 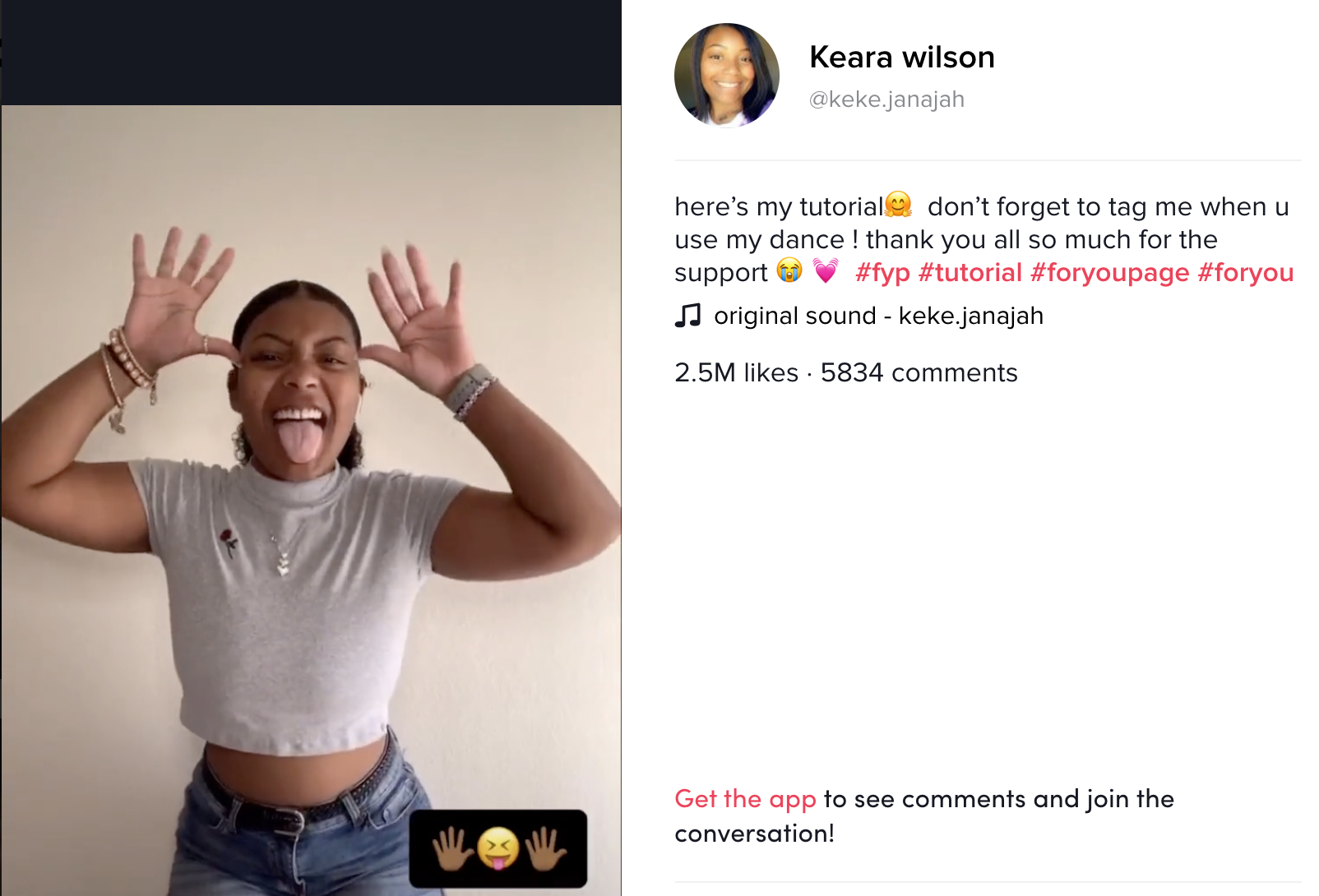 I chose doing viral TikTok dances, which will hopefully make me some bread one day, heyoooo. (Just kidding. I’m still feeling sheepish posting them on social media, let alone think about monetizing them.)

I’ve always enjoyed watching TikTok dances from teens who’ve now made whole careers from doing them: Charli D’Amelio, Jalaiah Harmon, Addison Rae, etc. They are blissful reminders of youth that I like to scroll through before going to bed. Before quarantine life, I would learn parts of dances and send them to friends out of the blue to make them laugh. But I never thought to seriously try them myself.

The past few days, however, I got to actually study the dances and where they come from. I feel like I am getting back in touch with my teenage self, because this would have absolutely been the kind of stuff I’d be into if it were around when I was 13. I mean, being stuck at home and calling my friends all day long already feels like I’m back to the first year of high school again. (Except now I have a mortgage and the constant, grim realities of life and death.)

Anyway, what I’ve learned this week is that the viral dances are really FUN to do, the filters add a special anarchic touch, and the choreography is surprisingly hard. Especially the iconic “Renegade” dance, so shout out to Jailaiah for helping to break a lot of older peoples’ bones.

The original dance creators have to really market their choreo, which is also super impressive. In the case of Keara Wilson, who started the “Savage” dance to the Megan Thee Stallion song, she posted it every day until a top TikTok creator (usually Charli or another cute white talent) picked it up, and then it quickly spread. I tried learning it from Keara’s TikTok tutorial and, well, I can confirm ~throwing it back~ is both difficult and endangering to your lower spine.

I know I look a fool — you’ll probably look a fool. But that’s the point! In these times, being in touch with that kind of innocent youth energy, even momentarily, is what’s helping me get through.

10/10 I recommend you try it!!! And no, I am not sharing my videos with you, so don’t even ask! But for the handful of my Instagram friends and network whom I have shared them with: You’re welcome? Sorry?

Take care of yourself; it’s still OK to laugh and express joy — even, nay, especially at your own expense,

Tags: be, Coronavirus, The, Ti, Will
You may also like
Recent Posts