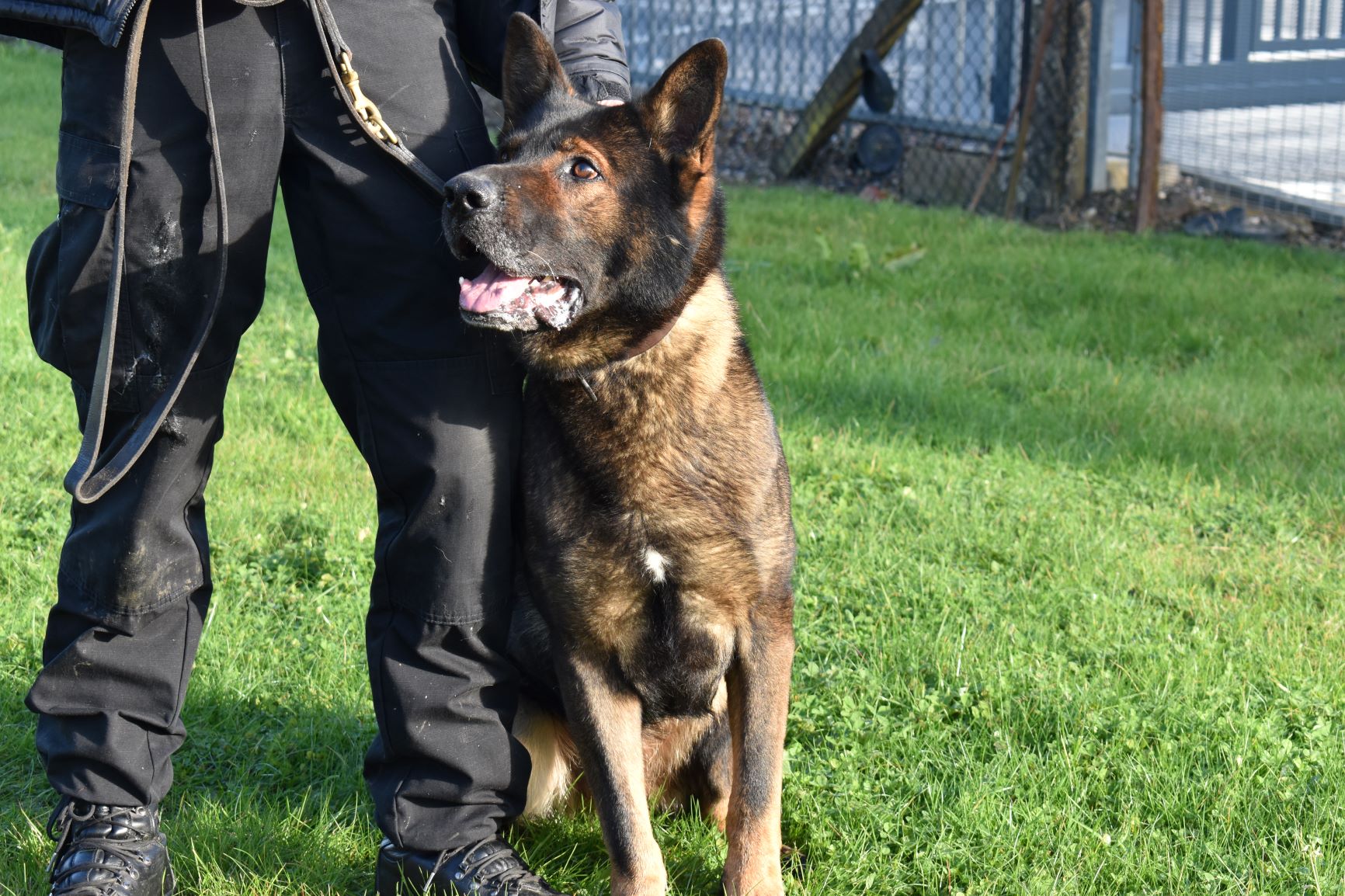 ‘Sitz!’ I shouted to my 10-year-old German Shepherd Axle, who obediently sat down.

Looking into his hazel brown eyes, I could hardly remember what life was like without him – one thing was for sure, though, I certainly didn’t speak German back then.

My husband David and I have always been dog lovers – we grew up with them, and have had many over our 30 years of marriage. Living on a small holding, we’ve got room for them – including for alpacas and an African grey parrot, too.

Through my job as a police community officer, I’ve met plenty of working dogs – including Axle, who worked with a handler called Dean.

In 2019, six months before Axle, then eight, was due to retire, Dean asked me if I’d like to rehome him – he knew we already had three dogs at home, as well as the space.

I knew the history Axle had, though, as only a year earlier he’d been stabbed three times by a runaway criminal – twice in the neck, then again on his body.

Miraculously, he’d survived after countless operations and even went on to win a bravery award.

Still, he’d gone back to work for another year, so he was a real hard nut to crack – he had no other choice, really, as he was bred in Germany to be a working dog. Never a pet.

He’d never been socialised with other dogs, or even humans – and Dean admitted that it took a good few years for Axle to let him pat him on the head without a growl.

Axle had a rep at the station for being a loudmouth, and for getting the job done.

He wasn’t a dog that wanted cuddles or kisses, and his commands were in German – so there were lots of red flags. But I knew that a home would have been pretty hard to find for him. Axle needed certain requirements for his well-earned retirement, and our environment fitted them.

It didn’t take long to persuade David, either, and in November 2019, Axle finished his last day at work, and got dropped off at our house.

He was hyper at first, jumping up and constantly on the lookout. It took both us and Axle time and patience to learn to trust each other.

David and I had to learn a bit of German, too – to get Axle to take note of us. We printed off some basic German commands, and stuck them on the fridge – which was very weird in the beginning!

Though Axle doesn’t go to the park as he’s not socialised with other dogs – including our own – you couldn’t ask for a nicer dog. He’s beautiful and a pleasure to be with. We call him our big soft bear as he rolls over and wants belly rubs.

It took about eight months for Axle to accept affection from us, and we achieved this through time, patience and trust from both sides.

He’s been totally transformed with a little TLC, and is totally adorable – he loves a cuddle, and kisses on the head. He’s even partial to a little brush here and there, so he seems to be relishing retirement.

Sadly, he’s getting older and it’s starting to show on his body – when we took him on, we had to fork out the cash for his various pills and meds for his hip and joints from all the years of working. Long, 12 hour shifts have taken a toll on him.

It’s unfair, but when you decide to rehome a retired police dog, they don’t come with a ‘doggy pension’. They get passed on with all the vet bills and meds – with no support or remuneration.

I know one police officer who wanted to keep her dog, who she’d worked with and formed a bond with for years, but couldn’t afford it.

David and I knew we had to pay for Axle’s meds when we took him on, and we were happy to, but a couple of months later he had prostate troubles and we had to pay over £1,000 for surgery.

The sad reality is that inevitably having to fork out for vet bills from years of service can be expensive and put people off rehoming a police dog. There’s no real incentive to.

One day, I was scrolling through Facebook when I came across a charity called the Thin Blue Paw Foundation – they were inviting ex-service dog owners to get in touch.

Thinking I had nothing to lose, I reached out and discovered that they worked to help cover some of the costs for problems that have been brought on by service.

They look at paying for treatment or help you raise the funds for it. Thankfully, we haven’t needed their help yet but it’s a comfort to know they are there if we need to use them.

Hopefully, with the Thin Blue Paw being there, it will encourage other people who are thinking about rehoming a dog but think they can’t afford it, to be able to.

It would be even better if these dogs were rehomed with the bills paid for as the expensive problems are instigated from being working dogs, initially.

Really, Axle just enjoys being with us; lazing in the sun, chewing his toys, and barking at the rabbits and alpacas. He wanders around, doing as he pleases – and every dog deserves that life.

Axle has changed our lives – for the better. He may be an expensive hobby, but he’s our big soft teddy bear, and I wouldn’t have it any other way.

For more information on the Thin Blue Paw Foundation, visit their website.

Tags: Animals, Dogs
You may also like
Recent Posts