All after-hours access to politicians’ offices could be logged and security required to report serious incidents to a new independent body in a bid to prevent future sexual assaults or harassment at Parliament House.

The recommendations stem from one of three reviews initiated after former Liberal staffer Brittany Higgins went public with an allegation she was raped by a colleague in a ministerial office in March 2019. 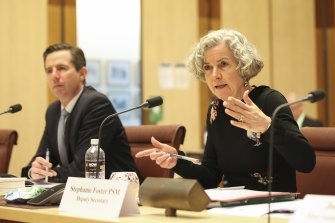 Senior public servant Stephanie Foster has recommended an independent body be set up to deal with serious incidents in parliamentary workplaces.Credit:Alex Ellinghausen

Prime Minister and Cabinet deputy secretary Stephanie Foster’s report, released publicly on Friday, also revealed dozens of complaints had been made to the Department of Finance in recent years, with 38 relating to bad behaviour by politicians.

It found current processes were not designed to deal with serious incidents, particularly sexual assault, and there was a widespread lack of trust in the systems.

Central to Ms Foster’s 10 recommendations is setting up an independent serious incidents team with case officers who are qualified social workers or psychologists.

It would provide support and deal with complaints, including anonymous ones, relating to incidents or patterns of behaviour that caused serious harm to someone, such as assault, sexual assault, sexual harassment and serious bullying.

This team could ask independent experts to review incidents and recommend responses.

If an MP would not engage in the review process or failed to act on recommendations, whether relating to them or a staff member, Ms Foster recommended the Speaker and Senate President be asked to take appropriate action.

New data from the Department of Finance shows it has dealt with 76 complaints related to Parliament since mid-2017, five of which were about sexual harassment. Finance received 16 complaints between July 2020 and February 2021, with three leading to mediation and two to external investigations.

Last week, police revealed they were investigating 15 claims of misconduct involving federal politicians or their staff, including sexual assaults, referred to them since March.

She also recommended all politicians and their staff receive “targeted, personalised, face-to-face training” about dealing with bullying and harassment.

Finance said the training it offered on preventing bullying and harassment had higher take-up than other types – but only 17 per cent of staff had done it this financial year.

The government is yet to formally respond to the report but Prime Minister Scott Morrison took its recommendations to cabinet for discussion last week. He will consult across Parliament on how to proceed.

‘Unacceptable behaviour, whether by parliamentarians or staff, inflicts damage on everyone and undermines the legitimacy and authority of the Parliament.’

In the report, Ms Foster described the current environment as a watershed moment for Parliament and said there was a strong case for change so people felt safe to call out bad behaviour.

“Unacceptable behaviour, whether by parliamentarians or staff, inflicts damage on everyone and undermines the legitimacy and authority of the Parliament, and its ability to attract and retain high-quality staff,” she said.

“One of the challenges consistently highlighted in consultations is the perception that a serious incident will be ‘swept under the rug’ and that there are no clear consequences for parliamentarians who tolerate, or contribute to, serious incidents in the workplace.”

The union representing parliamentary staffers said employees, not just politicians, must be consulted on the next steps.

The Community and Public Sector Union and staff representatives have sought in recent months to have a sexual harassment and violence policy put into a new enterprise agreement but the government rejected it. The new pay deal passed on Friday night, with 52 per cent in favour out of a record 89 per cent of staffers voting. Staff rejected a previous version of the agreement in December.

The Foster review focused on what could be done in the short term. Sex Discrimination Commissioner Kate Jenkins is doing a comprehensive review of behaviour in parliamentary workplaces that will report in November.

Meanwhile, Ms Higgins was hospitalised on Friday to safeguard her mental wellbeing, The Guardian reported.