For many country fans, it seems the 2021 CMT Music Awards ended up being thankfully more eventful than not. Despite some last-minute hiccups — like the last-minute performance cancellations made by singers Maren Morris and Gabby Barrett or the ensuing social media kerfuffle over Taylor Swift’s win for her re-recorded song “The Best Day” — the show’s performance lineup seemed to make up for any possible missteps. But it seems that one collaboration in particular, featuring one of the genre’s biggest talents, was the true standout of the ceremony. At least, according to viewers who plugged into social media for the sole purpose of exalting their all-time favorites.

So who is the singer — or singers (!) — in question? Is it possible that they “won” the CMT Awards, whether or not they actually took home a trophy? And lastly, did they indeed end up nabbing an actual award IRL? Keep on scrolling to find out more below. 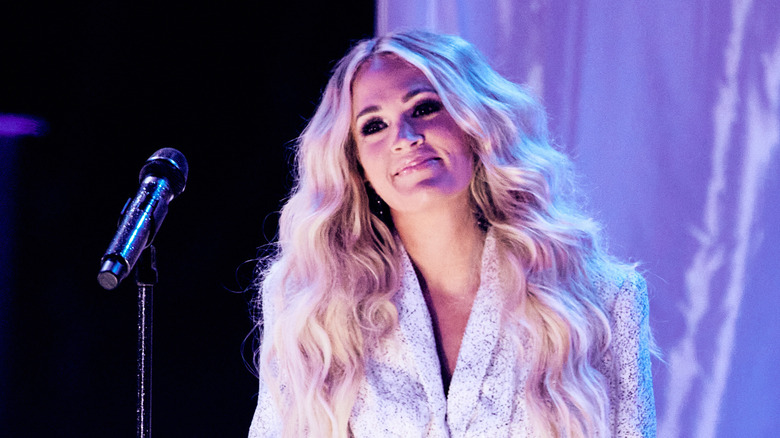 As country music-loving internet denizens reported in droves on social media, it seems the true “winner” of the 2021 CMT Awards was none other than Carrie Underwood, along with the rock band NEEDTOBREATHE. At the show, which was held on June 9, Underwood sang alongside NEEDTOBREATHE in a duet the group released in May featuring Underwood. As Entertainment Tonight, the performance, which took place at Bonnaroo Farm in Tennessee, marked the first time both Underwood and the band played “I Wanna Remember” for an audience.

According to Twitter users, the performance appeared to be a major highlight — if not the major highlight — of the night. “Like a proud music momma,” wrote one person in reaction to the song. “@NEEDTOBREATHE and @carrieunderwood that was absolute freaking perfection.” Another anointed the Underwood/NEEDTOBREATHE duet the “best performance of the night,” while a third stated that their onstage collaboration “needs to happen a whole lot more.”

Even though Underwood was met with laudations and praise, it wasn’t her only win: at the end of the night, she took home the award for Video of the Year for “Hallelujah,” alongside collaborator John Legend. “Fans, thank you so much, fans,” Underwood said during her acceptance speech. “You guys, you are the reason we are all here doing what we do, doing what we love, making music videos.”