Libby Trickett files it under “a good idea at the time”. At the 2007 Duel in the Pool in Sydney, a series of match races between the swimming superpowers, she thought it would be a fine idea to sledge Michael Phelps, who went on to become the most decorated Olympian in history.

Waiting behind the blocks for a novel 4x100m mixed freestyle relay, in which Trickett (then Lenton) went head-to-head with the American superstar, she supplied Phelps with a slice of good-natured banter to see if it could shift him from his game.

“I basically told him he had nothing and I was going to take him down,” Trickett said with a laugh. “I mean, what’s he ever done? Sure, he was just off the back of the 2007 world championships in Melbourne, which was his greatest ever meet to that point [he won seven gold medals there, then eight golds at the 2008 Olympics a year later].”

As expected, Phelps prevailed, but it was the Australian who emerged from the race with a tale to tell. Leading off, she was the first woman to break 53 seconds, although the record was never ratified as she was swimming against male competitors.

Even with Beijing butterfly gold a year later, Trickett still remembers the Duel in the Pool, staring down swimming royalty, as one of the highlights of her career and has urged Australia’s new aquatic stars to buy in when the meet returns to Sydney from August 19-21.

Swimming Australia announced the event on Wednesday at Bondi Beach, overlooking the course of the open water race, while, for the first time, para athletes will compete as part of the 30-strong squads. The Olympic pool at Homebush will play host to the rest of the competition in what promises to be the biggest swimming event in the Harbour City for more than a decade.

The Australians will be fresh off a Commonwealth Games campaign, while some of the Americans will have competed in the world championships in Budapest in July. Either way, both nations expect the team aspect and prizemoney will tempt the best of the best, which means Katie Ledecky, Caeleb Dressel, Ariarne Titmus, Emma McKeon, Kyle Chalmers and more. 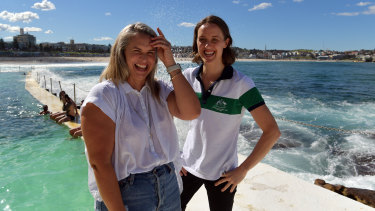 Libby Trickett and Ellie Cole at Wednesday’s launch of the return of the Duel in the Pool.Credit:Sam Mooy

“Hell yeah, I’ll be there. As a fan of swimming, it doesn’t get much better,” Trickett said. “This lights me up and gets me excited. The best in the world on our doorstep, that’s incredible.

“That’s something fans of Australian swimming haven’t been able to experience for many years. I was lucky to be part of the 2006-07 era where we had a lot of high-class performances right here. And for the next generation of athletes, to see these guys up close, to taste that sort of elite competition, that’s only going to be inspiring with a home Olympics now on the radar.”

The potential for Tokyo rematches is enticing. Titmus and Ledecky are likely to clash over 200m, 400m and 800m, while Chalmers and Dressel, the two most recent Olympic champions, will renew their 100m freestyle rivalry. And any time Australia and the USA meet in a relay, the fireworks aren’t far behind.

“It’s Christmas for me,” said Australia head coach Rohan Taylor. “I think it will energise the athletes. It’s something new. If we put a good event on, create a great atmosphere, they will respond. The opportunity to be part of a team, be together, be on show, they bring so much to the table.

“The Americans, they love Australia so coming down here was an easy sell. The timing was absolutely right.”

Taylor is hoping the Duel in the Pool can become a more regular feature on the calendar, even an annual clash, and confirmed the Australians would leave the Commonwealth Games in Birmingham after the completion of the swimming component so they can return home and prepare for the inbound might of Team USA.