As COVID-19-related hospitalizations rise in Hawaii, health officials worry that the demand for medical oxygen will exceed what the islands are able to produce. Since the beginning of August, the state’s daily consumption for medical grade oxygen has increased by nearly 250%, according to the state’s healthcare association.

“This is the first time that there has been a potential shortage,” Hilton Raethel, CEO and president of the Healthcare Association of Hawaii, told CBS News. “It doesn’t mean we’re running out of oxygen, because these plants are producing 24/7. The question is, do we have enough.”

Raethel attributes the recent rise in oxygen demand to growing COVID-19 hospitalizations throughout the state, saying that many patients with the virus rely on medical oxygen therapy. Currently, there are more than 11,000 active COVID cases in Hawaii, the state health department reports. And to date, 78.51% of intensive care unit beds are in use, according to data from the Department of Health and Human Services. 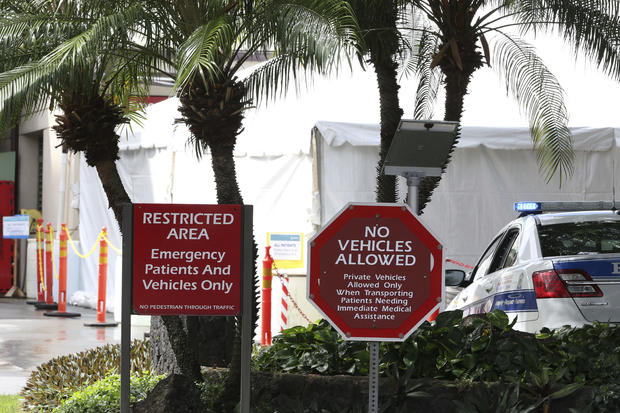 Typically the two liquid oxygen plants, which service Hawaii for various gas needs, produce four to five times of the state’s demand for oxygen, Raethel said. Amid the recent COVID wave, the plants are operating at full capacity.

Oxygen concentrators would have to be imported from the mainland should Hawaii see a shortage, which isn’t a common request from the island state.

“Normally, there’s plenty of capacity,” Raethel said. “Normally, the only time that we would need to ship in oxygen from the mainland is if one of our two plants were to go down for maintenance.”

But transporting the resource has been complicated due to the “worldwide shortage” of liquid oxygen amid the pandemic, according to Raethel. Hawaii can now experience wait times of at least 30 days before seeing medical oxygen arrive in the state.

“It would be many, many months before we can get them,” he said.

Health providers throughout the country “are looking at a number of solutions” to maximize oxygen supply and prevent a shortage, Raethel said.

“Any cases that can be deferred safely should be deferred until the oxygen supply solutions are clearer,” the network’s president and CEO Ray Vara said in an internal memo.

The Healthcare Association of Hawaii has been in conversation with federal and local agencies to discuss the impending oxygen shortage, Raethel said. He urged residents to get vaccinated and practice COVID-19 safety protocols like avoiding large crowds.

“We now have this potential shortage of oxygen and we need people to understand that this is very serious, that there are finite resources in the state of Hawaii,” he said.

Tags: Coronavirus, covid-19, oxygen
You may also like
Recent Posts