Home
Lifestyle
‘There will be COVID at the Games’: Sport Minister says Australian athletes will be exposed in Tokyo

Sports Minister Richard Colbeck says there is a high probability Australia’s athletes will be exposed to COVID-19 inside the Olympics and will need to do hard quarantine upon return from Japan.

But despite the admission, Colbeck stopped short of guaranteeing those same Australian Olympians will be protected and given access to vaccination ahead of the Games. 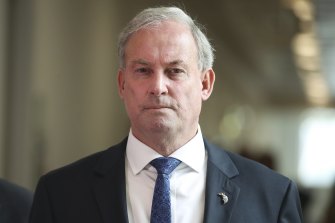 Sports Minister Richard Colbeck says there is a high probability our athletes will be exposed to COVID-19 inside the games and will need to do hard quarantine.Credit:Alex Ellinghausen

Colbeck provided an update on preparation for Tokyo 2020 on Monday while announcing the 2027 Netball World Cup.

The federal minister said while the recent COVID-19 cases in Tokyo was a genuine concern, a decision is yet to be made on fast-tracking vaccines for athletes heading to Japan. As reported by the Herald, the Australian Olympic Committee is ramping up lobbying efforts to have all athletes vaccinated with the Pfizer vaccine soon, and national cabinet is due to make a call on Friday,

The conversation around travellers returning to Australia has been heightened in recent days after a man believed to be patient zero of Perth’s recent cluster was found to have returned from a wedding in India. The man was in quarantine on a floor of the Mercure Hotel with 24 other overseas travellers before the virus spread across several rooms.

“It’s not just about Olympians. You’ve been talking to the (NSW) Premier about people leaving Australia for a range of reasons…it’s just not about sport and athletes, but they are one of the groups that we are looking at,” Colbeck said.

“Statistically, the probability is there will be COVID at the games. So how that is managed in Tokyo and how we manage those athletes and then bring them home safely is very important.”

The state of emergency, which also included Osaka, Kyoto and Hyogo, comes just three months before the Olympics which is still scheduled to start on July 23.

The AOC have been pushing for Olympic athletes to be able to quarantine upon arrival home in a resort-style set-up, similar to the one AFL clubs used last year in Queensland, instead of a full hotel lockdown.

But Colbeck said athletes would likely be forced to undergo strict hotel quarantine upon return to Australia as a result of the rise of cases.

“The reality is there is a high likelihood that COVID will be present at the games and potentially our athletes will be subject to it and we want to maintain the level of protection for Australians within Australia,” Colbeck said.

“I would suggest that whatever quarantine the athletes undergo when they come home will be pretty strict.

“My expectation is that it will be a hotel quarantine type of system. I don’t see it being an AFL type resort-style quarantine system where people can mix freely, because if one of the athletes does have the virus we don’t want it spreading through quarantine.

“It will be important that it is a quarantine that is a high level of efficacy we don’t want to see it escape from athletes coming home from the Olympics.

The reasoning offered by Colbeck, that Olympians will be exposed to COVID inside the Olympic environment, will only strengthen the AOC’s case to have athletes vaccinated before departure but the Minister for Sport stopped short of guaranteeing that outcome.

Roughly 480 athletes and 500 support staff are expected to attend the games for Australia, who is behind other countries such as the United States, China, Russia, Britain, Germany, France, Israel and even New Zealand whose Olympic vaccine programs are well underway.

“I know that the AOC and those that are looking after the health of the athletes are watching all of this very closely and that’s why they would like to see the athletes vaccinated,” Colbeck said.

“A concern about the level of COVID in Japan and Tokyo in particular at the moment is I think a concern for us all.”

Tags: At, be, Covid, ga, The, there, Will
You may also like
Recent Posts