Home
Lifestyle
‘The time for that heavy hand is behind us’: PM says Omicron does not mean return to lockdowns

Prime Minister Scott Morrison says people should exercise common sense in protecting themselves and others from the coronavirus, but the time for mandates is over as Omicron cases rapidly rise.

As Victoria and NSW recorded a combined 4302 cases and eight deaths, Mr Morrison said on Tuesday leaders were going to have to “continue to calibrate” how Australia lived with the virus, but there was no future for lockdowns. 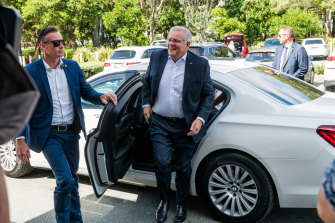 Prime Minister Scott Morrison, who was in Queensland on Tuesday morning, said people should do the right thing.Credit:James Brickwood

“The time for that heavy hand is behind us. [It is] the time for knowing and trusting Australians who have proven themselves with one of the highest vaccination rates in the world,” he told reporters. “We have to move from a culture of mandates to a culture of responsibility. That’s how we live with this virus into the future.“

National cabinet is meeting on Wednesday to discuss boosters and public health measures, as some states and territories consider bringing back indoor mask-wearing requirements. On Monday, the country’s Chief Medical Officer, Professor Paul Kelly, said people should wear masks in closed spaces if it made them feel safer.

Mr Morrison said people were already being sensible and wearing masks while out and about as the holiday period began.

State premiers plan on urging the Prime Minister to speed up the booster schedule, allowing people to get a third dose four months after their second shot. The Australian Technical Advisory Group on Immunisation is also considering whether a third dose is required for people to be considered fully vaccinated.

Mr Morrison said ultimately any decision to alter the vaccination program was up to the ATAGI health experts.

“The decision about what the intervals should be is one that the immunisation experts will advise us on,” he said.

So far, more than 1.5 million booster shots have been delivered across the country.

But Pharmacy Guild president Trent Twomey said some pharmacies and GPs had been forced to scale back booster programs as they could not afford to put on the staff to meet vaccination demand and run their businesses as usual.

“The Commonwealth reduced the amount of funding available to general practice and community pharmacy for dose three relative to dose two, so we’ve seen the small general practices, the small pharmacies that were doing the right thing, putting on the extra staff, now have to scale back because they’re just quite frankly flat-out doing what they normally do – they can’t afford to put on the extra staff,” he told ABC’s RN Breakfast on Tuesday.

“There is no way you can reduce that [booster dose] interval from five months down to four months unless we can increase the number of GPs and pharmacies participating in the program, it is just not logistically possible.”

Fascinating answers to perplexing questions delivered to your inbox every week. Sign up to get our new Explainer newsletter here.

Tags: for, hand, Heavy, That, The, Time
You may also like
Recent Posts