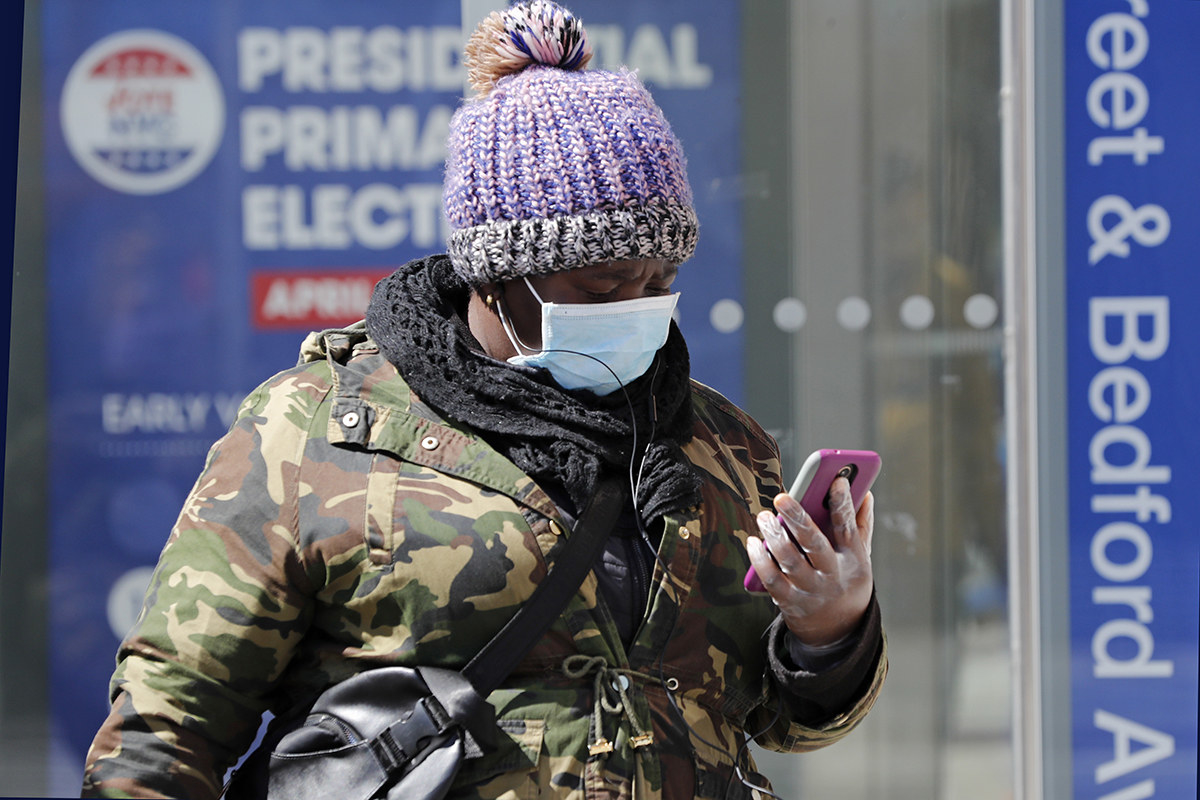 A home health aide checks her phone after disembarking from a bus, March 26, in Brooklyn.

Every day, they fan out across New York, hundreds of thousands of home health aides entering the homes of the city’s most vulnerable, the old and infirm unable to care for themselves. Practicing social distancing is impossible, how can it not be when your job is to change a person’s clothes, roll them on their sides, make sure they are getting bathed and fed.

Home health aides across the city, state, and country say they have been left exposed and unprotected as the coronavirus outbreak grows exponentially each day. Many say they have heard little to nothing from the agencies they work for, and have been given none of the basic things needed to try to keep themselves, and their at-risk patients, safe — gloves, masks, hand sanitizer.

“We really feel under threat. We don’t feel safe,” said Sally, 35, who is originally from Tajikistan and has been working as a home health aide in New York for nearly four years. She currently has one regular patient, a woman in her 90s living in Queens, who suffers from dementia and doesn’t understand that she is living in the midst of a global pandemic.

“The patients need us to come, they need us to work, and they give us nothing,” Sally said. “I buy everything myself — I buy gloves, I buy sanitizer.” In the early days of the crisis, she found a set of 50 masks for $100, which she bought herself, someone who makes just over $12 an hour. Sometimes, she spends half her daily pay on a taxi, so she can avoid taking the subway. The agencies reimburse her for none of that, nor do they provide health insurance.

“Honestly, I feel terrified — it’s scary what’s going on around us,” said Sally, who, like other workers who spoke to BuzzFeed News, asked not to use their full names for fear of professional repercussions. “I travel from another part of the city to see my clients and, on the subway, you see fewer and fewer people like there was some sort of apocalypse.”

There are nearly 400,000 home health and personal care aides in the state of New York, and up to 75% of them work in New York City, according to the Home Care Association of New York State (HCA-NYS). A recent survey by the group found that 68% of agencies working in the state “do not have access to adequate personal protective equipment in their COVID-19 response.” They also found that nearly 50% of all agencies reported instances where patients or family were refusing entry to home health aides over coronavirus fears. That means aides don’t get paid. And while there’s been a loud discussion about the ethics of continuing to pay other service providers, like nannies and cleaners, it has not really extended to home health aides, who continue to work in the dark, like so much when the elderly are involved.

“Home care has been completely missing from all of the directives on the prioritization of supplies,” said Roger Noyes, spokesperson for HCA-NYS. “We’ve been raising this appeal repeatedly through every level of government.” 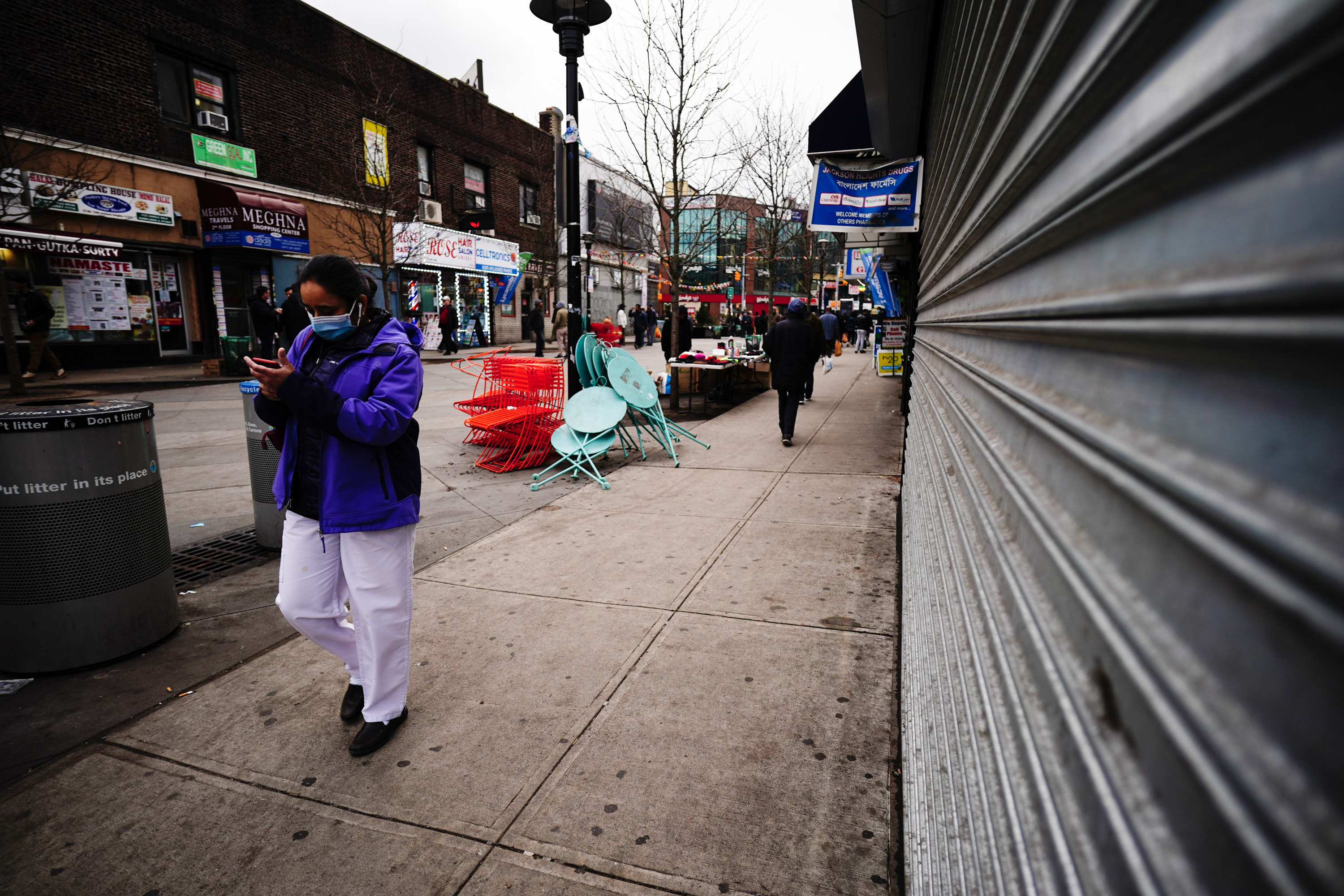 A view of people wearing masks going about their daily lives in Queens on March 21.

“The directives are coming from the city and that’s where the epicenter is — in the city the directives say priority supplies should be really reserved for hospitals, EMS, dialysis centers, nursing homes. Home care is just not even in the queue. Just to actually be mentioned in that directive,” he said. The group has begun hearing of instances where home health aides, many of whom are immigrants and/or people of color, have been stopped on their commutes by police enforcing New York’s shelter-in-place order, who have not recognized their agency ID as proof that they are essential workers, even though they are listed as such.

“Another thing we’re asking the local government is just to communicate out that home health care is under the governor’s order as an essential service, explicitly mentioned and to honor those credentials,” Noyes said. “It falls under the invisibility of our sector in the directives that are happening in a crisis like this.”

In New York, the issue has fallen victim to the endless tussle between the city and state. New York’s home health aides are “on the front lines of our healthcare system” and Gov. Andrew Cuomo is “committed to providing them with the supplies and equipment they need,” Gary Holmes, spokesperson for the state’s department of health, said in a statement. “We know home health care agencies are experiencing supply shortages, most urgently in New York City, but they should know help is on the way, as the Governor just announced the five boroughs will receive 169,000 N-95 masks, 430,850 surgical masks, 176,750 gloves, 72,561 gowns and 39,364 face shields, on top of the one million N95 masks the State already sent to New York City.”

While the current guidance from the Centers for Disease Control and Prevention suggests that masks are not necessary for healthy people to avoid contracting the virus, there is now increased debate in the medical community about whether those guidelines should change, especially for people who are still out and working closely with others.

Patrick Gallahue, spokesperson for the city’s health department, said New York City’s health care system “is facing a severe shortage of masks, gloves, and other key supplies that are needed to protect healthcare workers treating critically ill patients with COVID-19 infection in our hospitals” and warned that “local hospitals may run out of critical supplies within weeks at the current rate.”

“Therefore, we must prioritize ensuring the availability of protective equipment for healthcare workers working with patients with severe COVID-19 illness at this time,” he said.

Home health aides, moving around the city and coming into close contact with those believed to be most vulnerable to the coronavirus, argue that they are also on the frontlines.

They don’t have it easy in the best of times, as hourly wage-earners who are often provided few or no benefits to do grueling work. In New York City, the people they care for often have no one else. It can feel like solitary work, depending on the health of the patient. And they do it all behind the closed doors of homes.

Jobina has worked as a home health aide in the city for nearly 14 years and says she was drawn to the job because “the elderly need help.” Now, she said, “I fear for my life.”

“How are we protected, how are we assured that we are not gonna contract [the coronavirus] and be fine,” she asked. She said her agency provides gloves, but no masks, and little guidance beyond “wash your hands before and after your shift.” She lives in the Bronx and her sole client is there, a 45 minute bus ride away that fills her with stress every time.

Some home health aides faulted their agencies for failing to recognize the impact of the virus early on. “They should’ve prepared everything earlier,” said one woman, who works in Brooklyn and Queens and asked not to be named for fear she could be fired. The main agency she worked with, BNV HomeCare, only sent out its first guidance on March 18, well into the crisis, announcing how employees could pick up gloves (but not masks). A second notice, sent two days later, informed employees that the main office had been shut.

She has taken it upon herself to figure out how to keep herself, and her clients, safe during the crisis. “I wash my hands more often, disinfect all my outer clothes, disinfect every hour almost, wash the floors more often than I usually do, wash my hands really often,” she said. “Everyone is saying, ‘sit home and don’t go out.’ It seems to me in such cases they should pay for our car rides, give us gloves and masks. There aren’t masks anywhere, there aren’t enough gloves.” BNV did not respond to a request for comment.

The issue is most acute in New York, which has become the epicenter of the coronavirus in the United States, with more than 46,000 known people infected with the virus, 549 of whom have died as of Saturday morning. But it extends around the country.

“They don’t really look out for their caregivers in the way that I feel that they should, you know. I feel like we’re doing as much as we can for other people and the least that they can do is try to make things a little easier for us,” said Zoriah, 24, who is originally from Brooklyn and now works in Scranton, PA, where she lives with her husband and 17-month-old daughter.

As it looked like the coronavirus was taking hold in the US, she reached out to her manager at Americare Home Solutions, asking if they would be provided gloves and masks. “She said she would get back to me, but she never did.” The company only sent an email to their employees on March 16, outlining the basic guidance that had already become second nature to everyone around the country — wash your hands often, don’t touch your face. Zoriah, who makes $11 an hour, said she took it to mean that the company was telling her: “you’re still on your own.”

Jamie Shea, the director of Americare Home Solutions, said “we’ve had a lot of trouble, obviously, getting a lot of that stuff.” He said the company’s order for masks was on backfill and just two-thirds of their order of 150 bottles of hand sanitizer was only delivered on Thursday. “We are doing our best to keep up with it, and make sure that our caregivers know what the risks are,” he said. “All we’ve been doing for the last two weeks is asking for donations. Anybody that has it, we’re willing to take it and use it for our clients and caregivers.” He did not have an answer for why they did not begin to prepare sooner.

Last week, Zoriah’s main client died — an 87-year-old man who had suffered from respiratory issues for years. His kidneys started shutting down, and within a week he was gone. It was the first time she had lost a patient, and she was there when it happened. The company gave her no time to grieve.

She spoke to the agencies that employ health care workers around the country. “I really want them to know that their caregivers, they do everything that they can to help these clients every day. And it makes our jobs so much easier if we had an agency that stands behind us. And that they would help make everything a lot easier by providing us with simple things like gloves or fake masks or hand sanitizer, for that matter,” she said.

“It’s a tough job and we don’t get as much credit for it as other people do, but somebody’s got to do it.”

More on the coronavirus

Tags: Coronavirus, has, Outbreak, The, W
You may also like
Recent Posts