The coolest cottages for this summer: Fancy your own triumphant arch, a beach on your doorstep or 700 acres of back garden? They’re all among our great British escapes

Whether you’re looking for a romantic retreat or somewhere for a hassle-free family holiday, a cottage break is the perfect quick and easy getaway.

Here we’ve rounded up the top places to book around the UK for summer 2020 and beyond.

Scroll down for some stunning staycation inspiration… 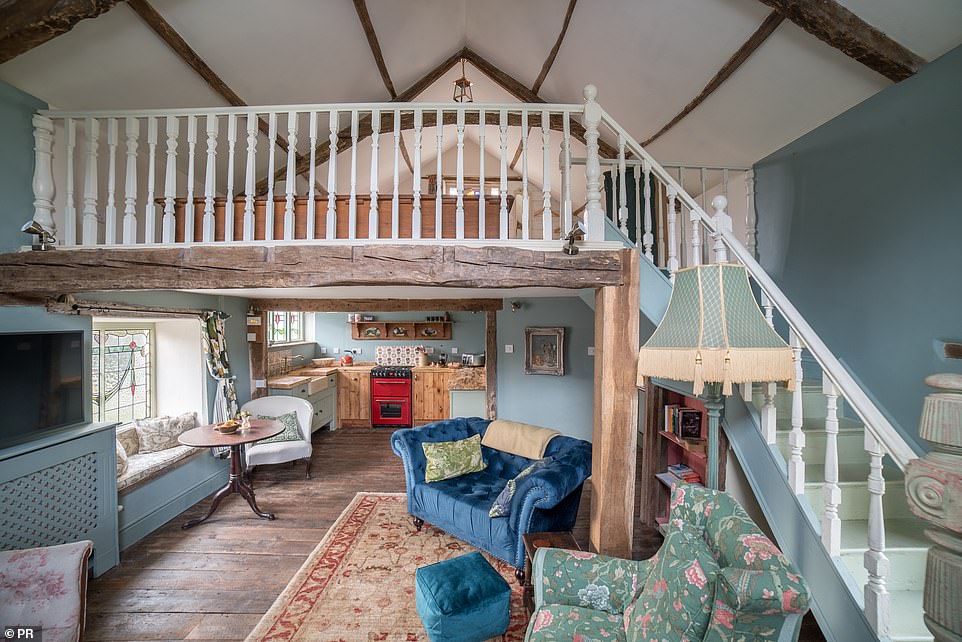 The name alone should give you that getaway feeling, although this little bolthole for two (plus one dog) lies not across the Atlantic but on 70 acres of private land between the Cambrian Mountains and the Brecon Beacons. As well as plenty of hikes, there is a mountain bike trail a mile from the door. What looks like a plain whitewashed building is full of country-style chic, with A-frame beams, a double-height ceiling with mezzanine bedroom, and views across the mountains – the kind of place you can’t wait to share with a loved one.

Cost: A week in July costs from £692 (qualityunearthed.co.uk).

Indulge your inner David Attenborough on this 350-acre farm – its woodlands, wetlands and meadows are home to more than 120 species of birds, 30 species of butterflies, 22 species of dragonflies, and the rare Clifden nonpareil moth. You’ll find ample creature comforts inside the two-bedroom modern house too, with a farmhouse kitchen, wood-burning stove and large patio area, where you can sip sundowners to the sound of the babbling stream. 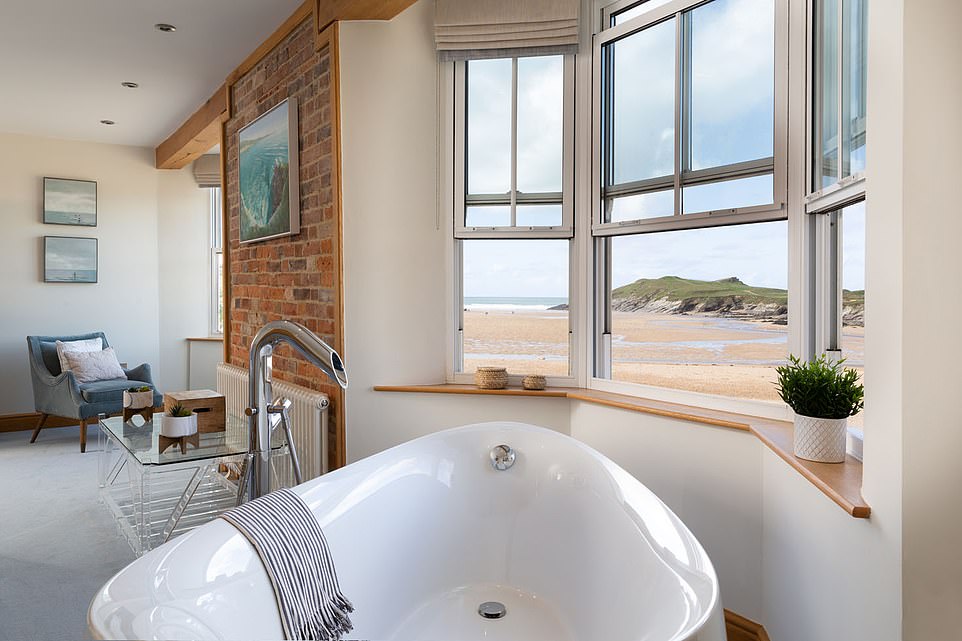 The Sail Loft in  Cornwall is a semi-detached property with a swish modern kitchen, a living room and three stylish bedrooms

There is fresh sea air by the bucketload here as well as amazing beach views – even from the bathtub. The semi-detached property has a swish modern kitchen, a living room and three stylish bedrooms. Steps lead from the terrace straight on to the sand, or you can take the popular South West Coast Path over the headland to Watergate Bay.

The great thing about having a brace of barns is you’re not all on top of each other: one holds two bedrooms, the other a rustic beamed living room and kitchen, along with a games room that’s home to a sofa bed. Between them lies a hot tub; croquet and badminton are also of offer in the garden. The dog-friendly barns are on the side of a secluded valley with a private arboretum and are a few miles from Bath.

Cost: A week in July costs from £1,650 (luxurycotswoldrentals.co.uk). 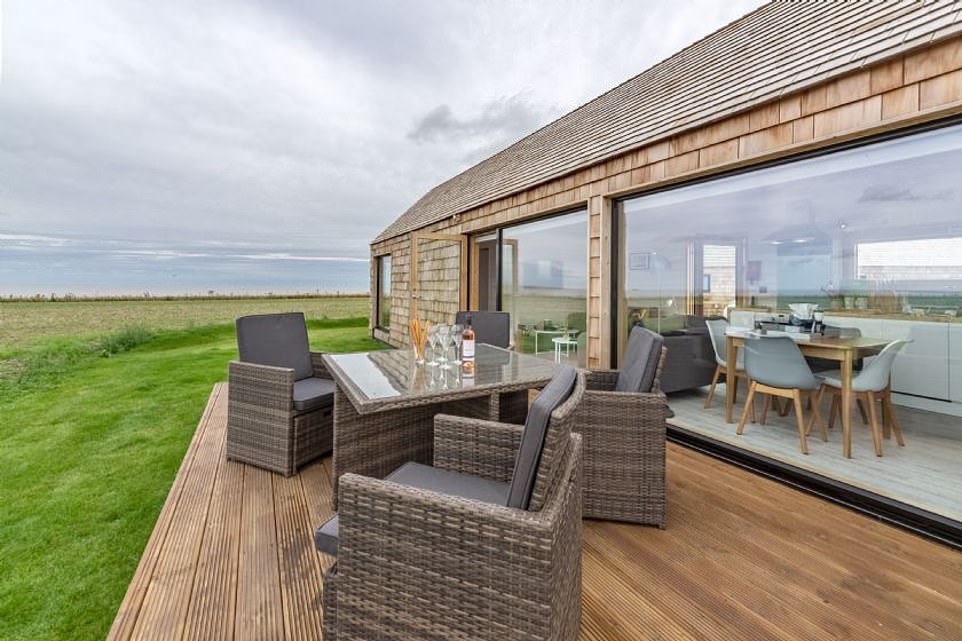 It’s easy to see why this place books up so quickly: with a beautiful, secluded beach on the doorstep, the wooden beach house with decked terrace makes the most of the sublime views. One of two properties on a private estate just a five-minute cycle ride from Southwold, this is on the site of a Second World War station that was used to listen out for German U-boats. 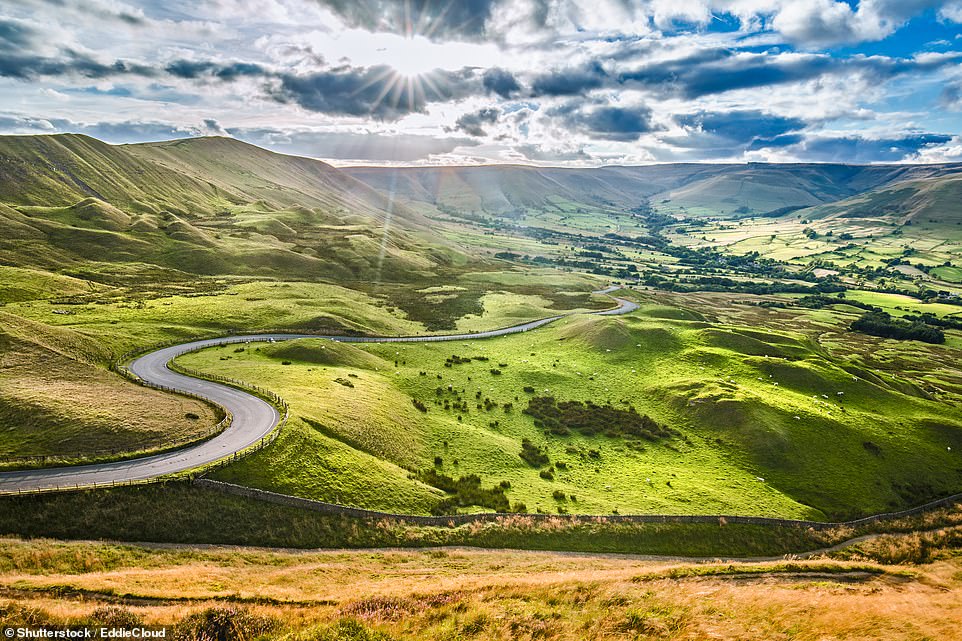 The 12-acre garden on the Wootton Hall Estate is a sight to behold, and with the Peak District close by, there are plenty of walking trails to be found too. If you need supplies, the historic town of Ashbourne is a 15-minute drive away. Inside the property, it’s farmhouse chic, with a large kitchen and cosy sitting room with log fire.

Cost: A week costs from £363 per person (duncombearms.co.uk).

As the sun sets on a long summer’s day, jump into the hot tub and drink in the bucolic views from this two-bedroom cottage set on 260 acres of farmland. There’s a firepit, too, to gather around at supper time, while the interior is stylishly cosy, with a roll-top bathtub in one of the two rooms. There are walking trails from the door, one leading to Crewkerne, just two miles away. Children under 12 are not allowed to stay. 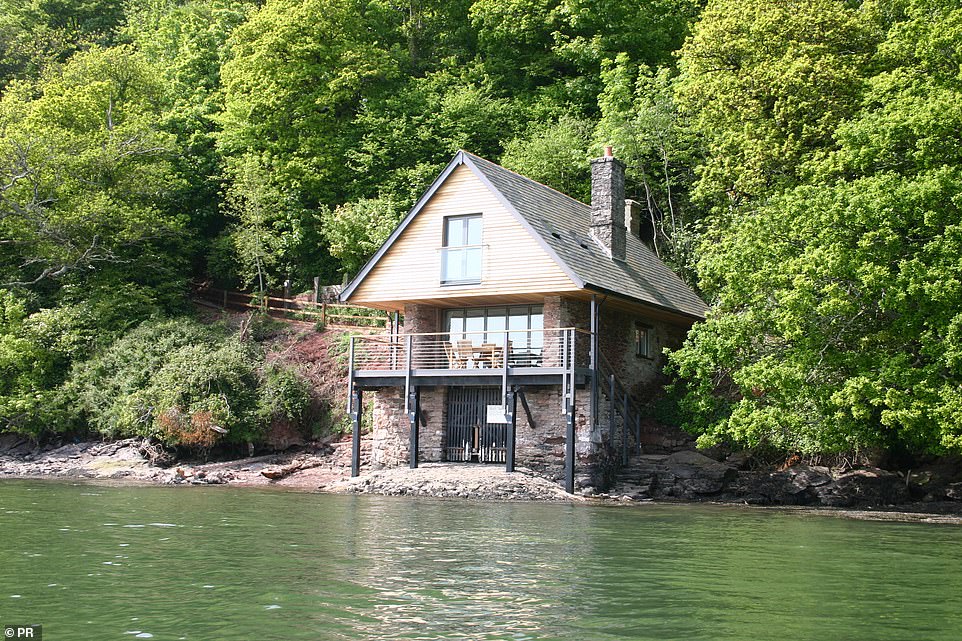 The Sandridge Boat House in Devon is incredibly peaceful, with only the sound of lapping water and birdsong

Watch the boats go by on the River Dart from the veranda just off the modern sitting room in this converted 18th Century bathing house – or take in the views from a bedroom balcony. It’s all incredibly peaceful, with only the sound of lapping water and birdsong. Sadly, a boat isn’t included but there are riverside walks, and Stoke Gabriel is nearby if you need local stores for supplies.

Cost: A week in September costs from £1,421 (helpfulholidays.co.uk).

There are hiking and biking trails right from the door of this cottage, while the River Esk is a short distance away. The simply furnished interior includes a ground-floor drying room/bike store, a small games room with table football and pool, and a conservatory from which to appreciate the calming views. One of the three bedrooms has bunk beds for children, and you can take dogs too. An organic butcher’s in Santon Bridge is just a couple of miles away. 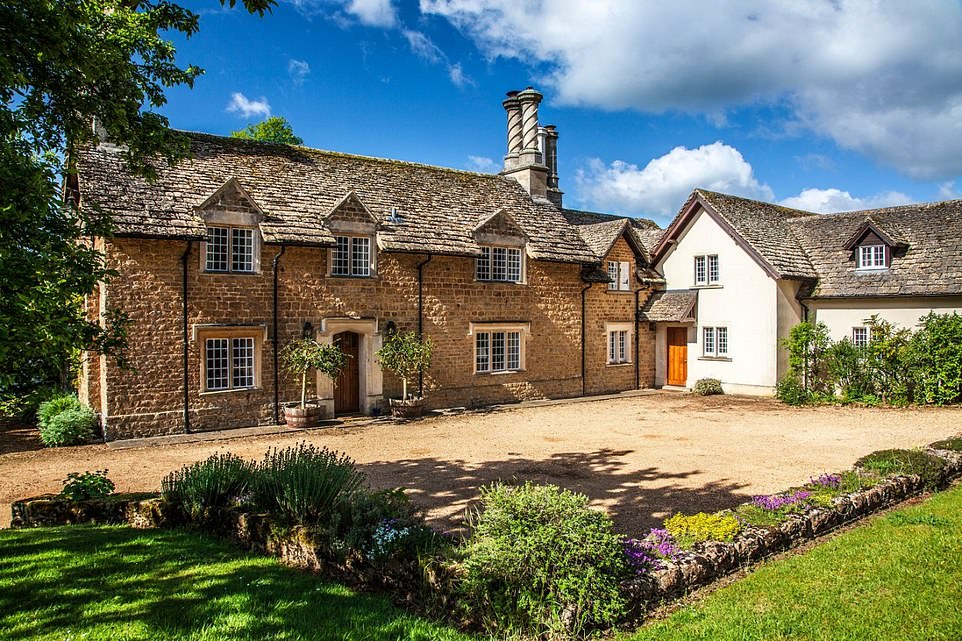 Many hotels have exclusive- hire cottages in their grounds, giving you independence along with the hotel facilities should you want them, but the four-room Queenwood on the Bowood Estate is the pick of the bunch. Expect elegant rooms, comfy living quarters with a separate TV room, a private walled garden and access to the estate, which is due to reopen in July.

Even if the weather is bad, you shouldn’t get bored here, thanks to an enormous cinema screen, table tennis table and an electric piano in the entertainment barn. What was an old cowshed is now the main living quarters: an open-plan sitting room and dining area has original stone archways and there are three bedrooms, all of them given a colourful makeover by the artist owner. Outside there is a hot tub, not to mention 700 acres of rolling Northumberland countryside. 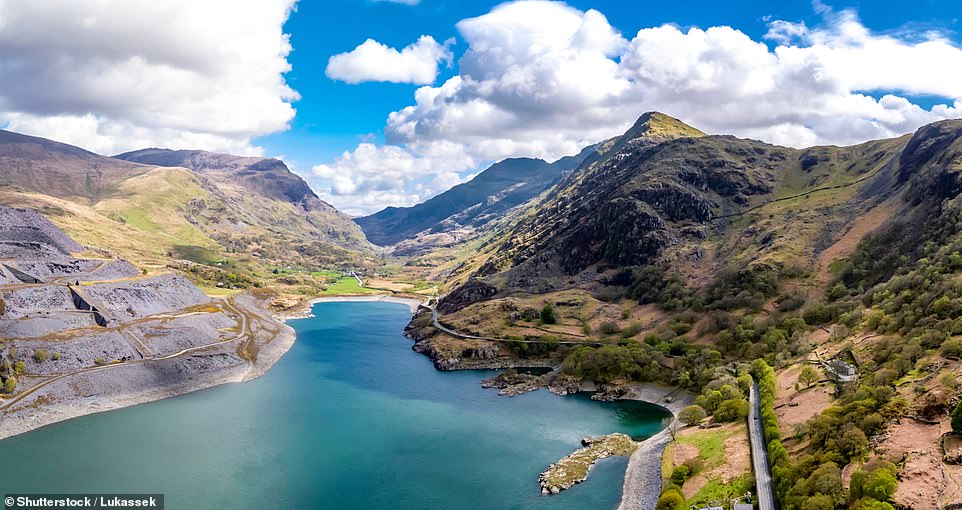 It really feels remote at this converted farmhouse in the hills high above Harlech, which is reached via a mountain track. Once there, you’ll be rewarded with sweeping views of Snowdonia National Park, which can be taken in through a telescope (great for stargazing) in the impressive conservatory. The simple but comfortable interior has underfloor heating and two wood-burners, while your water comes direct from the mountain.

Proof that rustic doesn’t have to mean roughing it: this charming log cabin comes with a sauna, hot tub and 100in cinema TV in the sitting room. Located between Whitstable and Canterbury, it has an open-plan kitchen/diner and three bedrooms, one with a copper bathtub. It is wheelchair-accessible too. 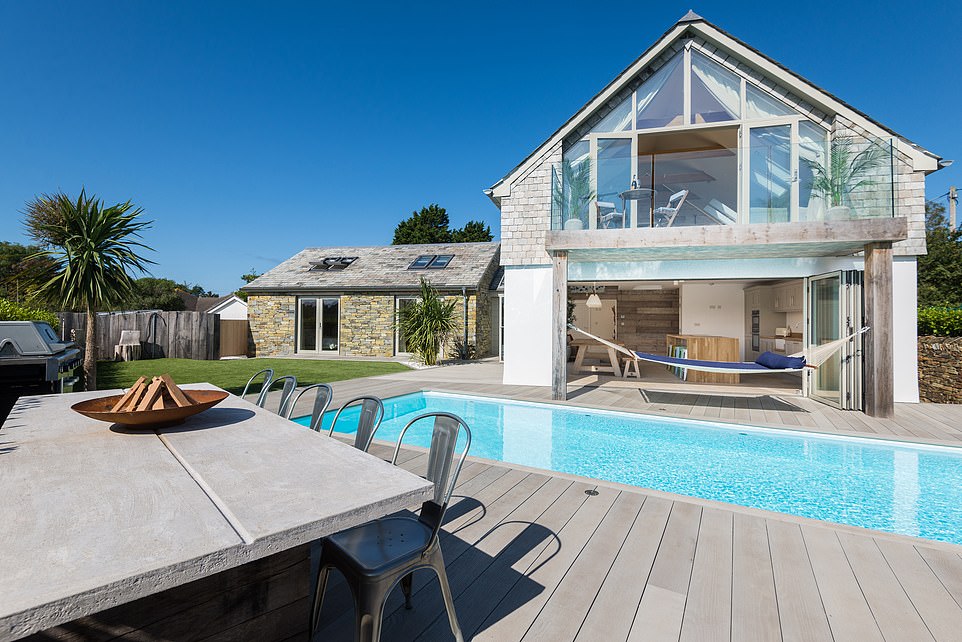 Rock’s star: Four-bedroom Fiddlesticks, above, is close to the Cornish resort of Rock

It’s all beach-house chic at this four-bedroom property, which comes with a 26ft heated pool, barbecue and firepit in the garden (do note the grass is artificial). Inside, you’ll find slate, natural stone and pale woods, floor-to-ceiling windows, a Sonos sound system, and furnishings in muted colours. It’s a short drive to Rock, and Porthilly Beach is within walking distance. 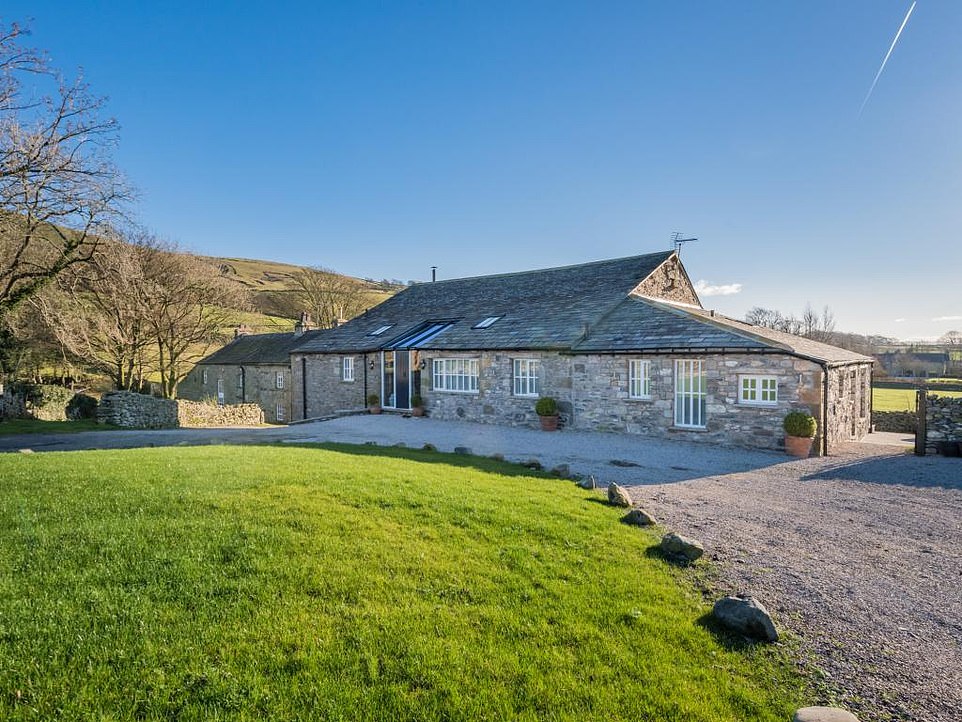 The open-plan kitchen under a vaulted roof in this barn conversion is a lovely place to conjure up culinary creations. The garden room leads on to a patio with views of the countryside and there are three modern bedrooms. A separate barn has a table tennis table, giant Jenga or even skipping ropes.

Cost: A week in July costs from £820 (sallyscottages.co.uk). 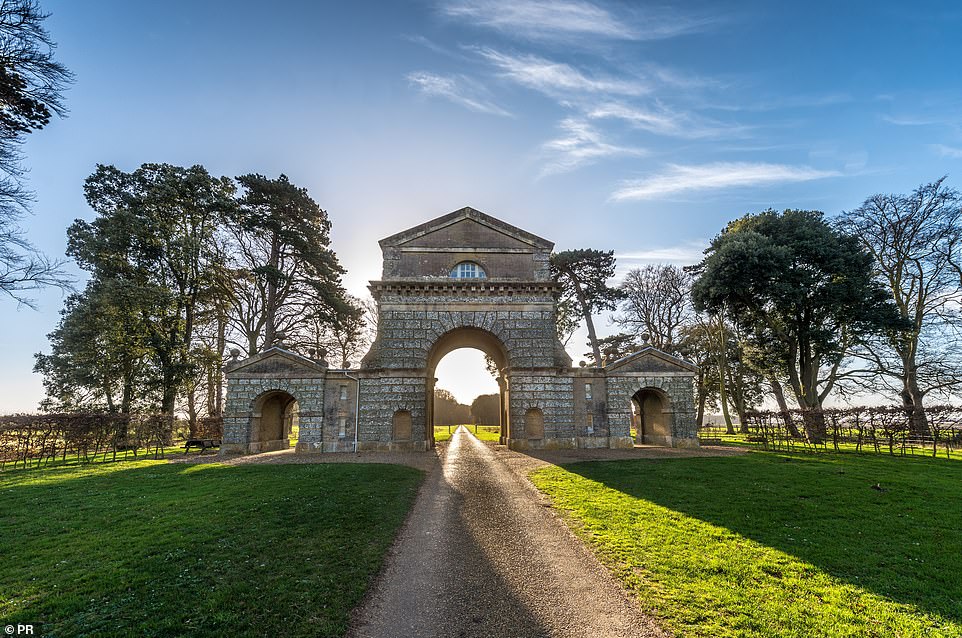 Grand getaway: The Triumphal Arch on the Holkham estate in Norfolk is the most sought-after of the four lodges

Boltholes don’t come much more idyllic than at Holkham, with four historical lodges set on a vast estate with a deer park next to Holkham beach. The 18th Century lodges have contemporary decor setting off features such as vaulted ceilings. The Triumphal Arch is the most sought-after, but Palmers Lodge and Palmers Folly are next door to each other, so create an ideal stay for four people.

Cost: Three nights in the Triumphal Arch in July cost from £1,502, while a week in Palmers Lodge or Palmers Folly is from £2,382 (saltnorfolk.co.uk).

You get the best of both outdoors and indoors when you stay at this thatched barn conversion. Outside are wild walks on Dartmoor, while the barn’s grounds have a children’s play area and a mown field for games, including skittles and badminton. Inside is a large vaulted games room with table tennis, pool table and a cross trainer. The ground floor of this modern conversion with three bedrooms is suitable for less mobile guests. 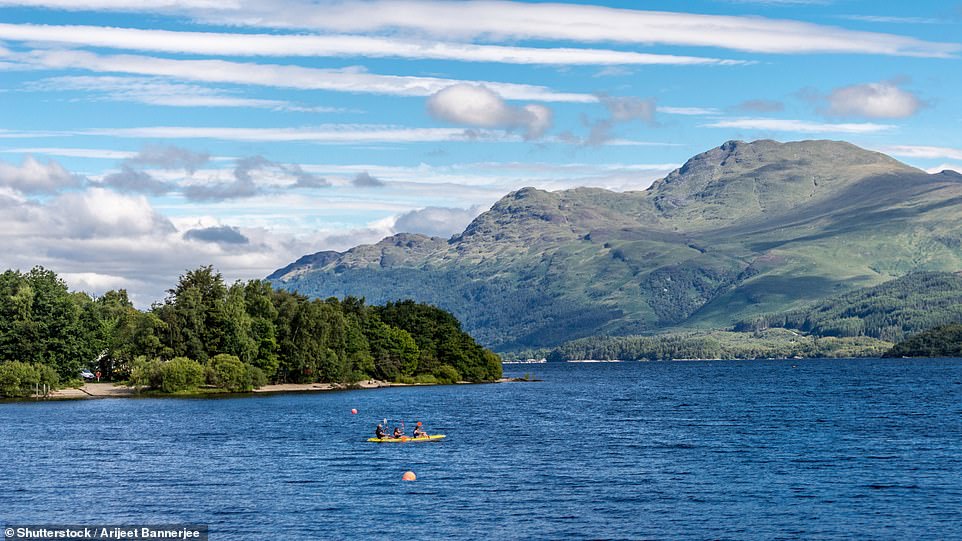 On the water’s edge in the Loch Lomond & The Trossachs National Park, this modern wood cabin near Callander commands beautiful views from its double-height interior. The mezzanine bedroom has two bunkbeds as well as a double, but if it’s all too compact, head out for a hike or enjoy a spot of fishing or kayaking on the water. There are two other rentals nearby if you are part of a bigger group.

Tags: Best, cottages, fo, in, The, UK
You may also like
Recent Posts