The former head of Macquarie's private bank is suing an Australian-based Chinese news outlet for defamation over an article read widely on social media platform WeChat that he says accuses him of running a company that "takes advantage of unsophisticated Chinese investors".

Guy Hedley, former chief executive of Macquarie Private Bank and a co-founder of Sydney-based funds manager Atlas Advisors, gave evidence in the Federal Court on Wednesday that he believed the article was "malicious" and published after Atlas rejected an offer to "sponsor" the news outlet, Australian Financial News, for $40,000 a year. 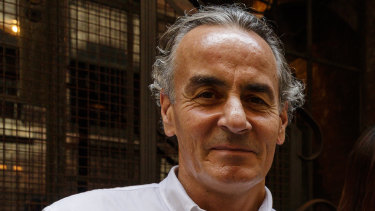 Mr Hedley is suing the publisher, Australian Financial News, and the author of the September 2019 article, David Han.

The article, headlined "Lamb to be slaughtered? Taken tens of billions from Chinese! Ponzi scheme under Australia's 'shadow bank'" was published on the AFNdaily website and shared on WeChat.

Mr Hedley claims the article conveyed several defamatory claims, including that he "runs a company [Atlas] that operates an illegal Ponzi scheme to protect itself from failed investments in property development" and "runs a company that takes advantage of unsophisticated Chinese investors who suffer losses by reason of Atlas' funding chain".

Atlas, a small company that sits outside the usual restrictions in Australia on companies suing for defamation, is also suing over the claims. A Ponzi scheme is a scam where existing investors are paid returns from money collected from new investors but there is no underlying business or investment.

AFN and Mr Han say the allegations were not conveyed.

The two-day trial is being heard in an online court. Mr Hedley said he was "sickened to my stomach" when he read an English translation of the article.

"You couldn't have chosen a worse set of words had you tried," he said. "The minute you use the word Ponzi scheme globally everybody goes on alert."

Mr Hedley's barrister Sue Chrysanthou said about 500 people read the article on AFN's website and 21,000 read it from the outlet's WeChat account.

In documents filed in court, lawyers for Mr Hedley allege that on July 9 last year an AFN "agent or employee" sent a WeChat message to an Atlas employee suggesting the "best way forward" was for Atlas to "become a member with us for a year, 40K in total" in return for advertisements on the AFN website and participation in events such as forums and summits.

The offer was declined. The AFN representative replied on August 5: "Looks like atlas has made its decision…".

Mr Hedley said the message appeared to convey a threat. He believed the subsequent article was an attempt "to get us to come to the table".

The court heard the author of the article, Mr Han, sought an adjournment of the trial last week. He claimed he needed to be tested for COVID-19 but there would be a two-week delay.

Mr Hedley said he called a government hotline and was advised testing would be "immediate" and a result known within 24 to 48 hours.