Martha Stewart: Snoop Dogg is fun to ‘hang with’

Snoop Dogg has a problem with the lack of Black representation in the higher ranks of the National Basketball Association and National Football League.

The 49-year-old hip-hop and business mogul spoke with the New York Times recently and opened up about the representation of Black people in the business world, specifically calling out the two organizations.

"Why don’t we have an owner in an NFL? That’s just racist. Period, point blank," he said. "We need to own an NFL team."

The NFL currently only has two owners that are minorities: Jacksonville Jaguars owner Shahid Kahn and Buffalo Bills co-owner Kim Pegula. Neither is Black.

Snoop – born Calvin Cordozar Broadus Jr. – said that the NFL isn't the only major sporting organization with a similar lack of representation.

Snoop Dogg railed against the NFL and NBA for their lack of Black ownership. (Photo by Frazer Harrison/Getty Images for BMI / Getty Images)

"We got one half-owner in the N.B.A., Michael Jordan," he pointed out. "But the whole league is 90 percent Black. So we still the slaves and they still the masters."

Michael Jordan is the only Black majority owner of a team (Charlotte Hornets), however, several other ownership organizations have high-profile Black members like Grant Hill and Shaquille O’Neal according to The Undefeated.

Such a lack of representation, he said, is why Black people in the music industry are pushing back.

"That’s why in the music game, we took the initiative to say, [expletive] that. We’re the masters, and we own our masters," the rapper stated. "We’re going to negotiate with you the way we think it should be. We changed that industry years ago, with our mentality of having our own labels."

However, the streaming business isn't terribly kind to artists in Snoop's eyes. 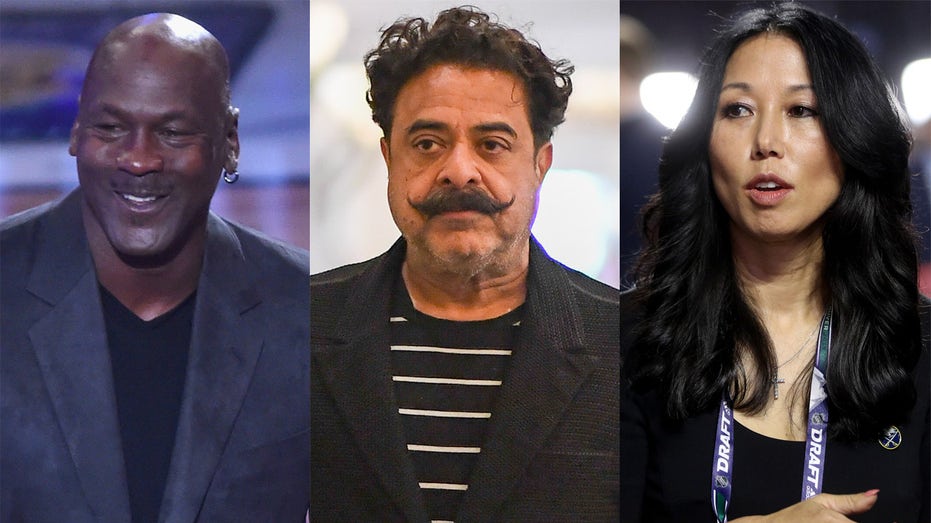 Michael Jordan (left) is the only Black person who owns the majority of an NBA team while Shahid Kahn (center) and Kim Pegula (right) are the only non-white majority owners of NFL teams. (Getty Images / Getty Images)

"So I’m just trying to figure out when they’re going to cut us in in the beginning, as opposed to always letting us be the ones who get it to a point where these platforms can sell for billions of dollars, and then the Black people that made it famous get nothing," Snoop continued, noting that TikTok faces a similar pattern.

"All of the young Black content creators on TikTok have boycotted because they see that when they do the dances they don’t get the attention or the money," he added. "But as soon as the White dancers do it, it’s the biggest [expletive] in the world and they on Jimmy Fallon. That’s not fair. It’s not cool to just keep stealing our culture right in front of us and not include us in the finances of it all."

Reps for the NFL, NBA, Spotify, Apple and TikTok did not immediately respond to Fox News' request for comment.