People like to tell Simon Helberg that they have never seen “The Big Bang Theory.” People such as Dustin Hoffman and Stephen Frears.

It’s a reflexive admission, apparently. Hoffman — with whom Helberg stars in “As Sick As They Made Us” — offered by way of mitigation: “But don’t worry, I’ve never seen ‘Friends’ either.” Frears, who cast Helberg in “Florence Foster Jenkins,” had heard of the show, but that’s it. “He just didn’t understand,” says Helberg. “He was like, ‘Is it one of those shows where you just stand there and tell jokes?’”

The wildly popular CBS sitcom, for better or worse, continues to define the careers of its cast.

In fact, Helberg’s film career (he’s also a jazz pianist who plays a “tiny bit of drums,” he says) is very much outside-the-box conscribed by the conventions of laugh-track TV. Yes, his résumé is heavy on comedy (in film and TV). But there are several eclectic roles with auteur directors, including Joel and Ethan Coen’s 2009 thriller “A Serious Man,” in which he played a squeaky, enfeebled junior rabbi, and Frears’ underrated 2016 comedy “Florence Foster Jenkins.” As the anxious, blinkering accompanist to Meryl Streep’s god-awful, delusional soprano — Helberg manages to steal scenes from Streep and Hugh Grant.

Helberg, 40, has made the trip to lower Manhattan from Rutherford, N.J., where he’s been shooting “Sick,” his friend and erstwhile “Big Bang” co-star Mayim Bialik’s directorial debut, with Hoffman, Candice Bergen and Dianna Agron. Slight and unassuming, he’s dressed in a dark gray T-shirt, baggy khakis and red sneakers, his hair pulled back in a neat ponytail. He wears his mustard-colored, cloth mask tight enough that, more than a half hour after it’s removed, horizontal lines remain indented across his cheekbones.

During the pandemic, Helberg and his wife, Jocelyn Towne (the actress-director-screenwriter and the niece of Robert Towne) and their children Adeline, 9, and Wilder, 6, retreated to their property north of Los Angeles, where they rode horses, remote schooled their children and mostly kept friends and extended family at a distance. “Sick” is his first project since COVID-19 shuttered Hollywood, and he admits that it feels “invigorating-slash-terrifying” to return to the humanity bath of pre-pandemic life. “Things are starting to feel semi-normal.” He pauses, and then adds: “But I’ll settle for less dystopian.”

Helberg may wear his anxieties on his sleeve, but he is eager to restart a post-network-sitcom career that now includes French cult director Leos Carax’s anticipated rock opera “Annette,” which opened the 74th Festival de Cannes on July 6, and comes to the U.S. in limited release on Aug. 6. Starring Adam Driver and Marion Cotillard, “Annette” is a sweeping, immersive, visually arresting film about a stand-up comedian (Driver), his superstar soprano wife (Cotillard) and The Conductor (Helberg), who forms a special bond with the couple’s baby daughter, Annette. The film features all original music from Ron and Russell Mael of Sparks, the art rock duo. It is also Carax’s first feature in English. “Annette,” like “Florence Foster Jenkins,” also utilizes Helberg’s considerable musical skills. A jazz pianist, Helberg had to learn to conduct an orchestra. Like the rest of the cast, he also sings.

“It’s been a conscious effort not to repeat things,” he explains. 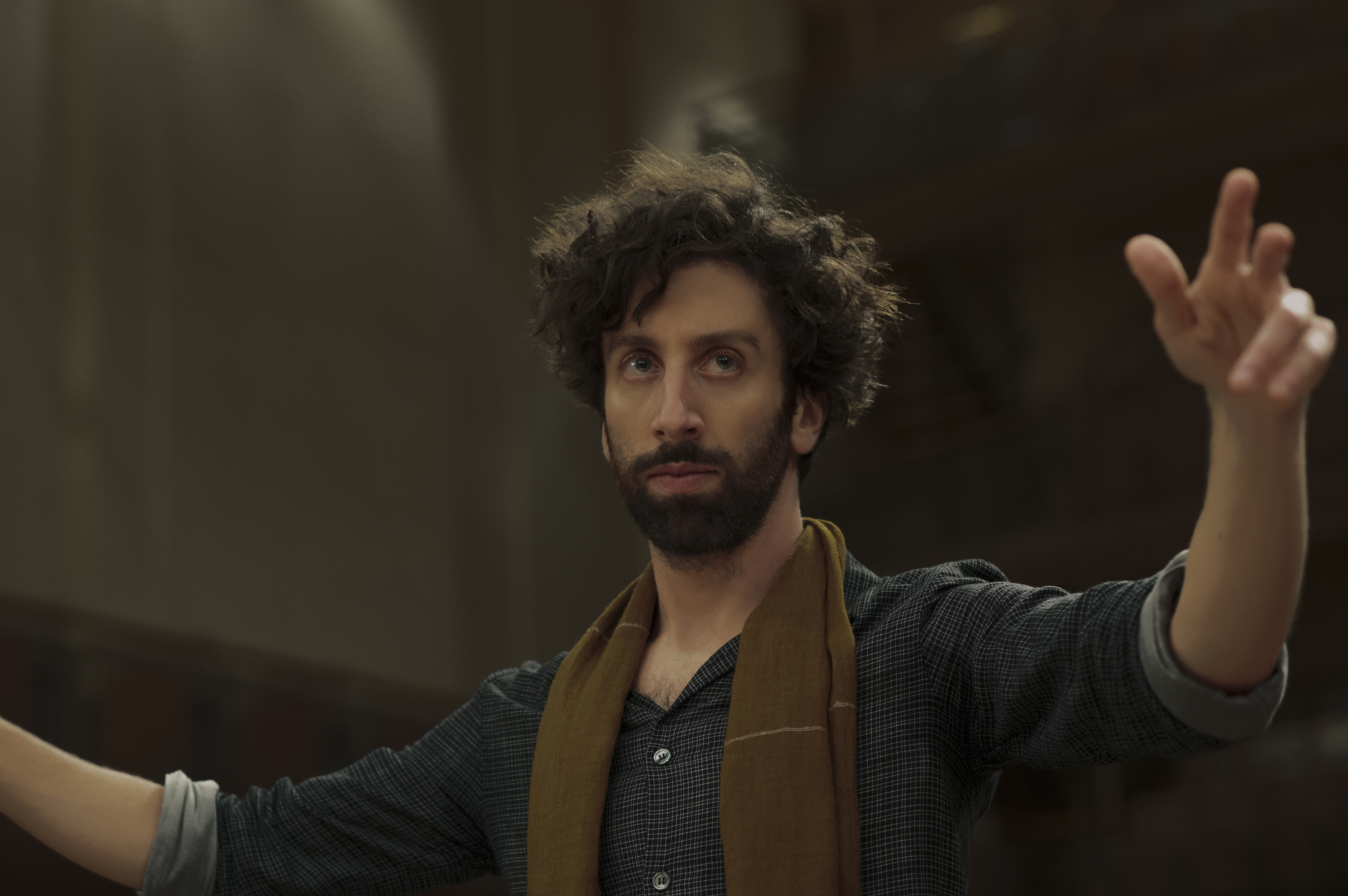 Helberg grew up steeped in Hollywood; his father Sandy Helberg, the son of Holocaust survivors, is a writer and actor and was an early member of Los Angeles improv theater The Groundlings; his mother Harriett is a casting director. As a kid, Helberg studied classical piano, but became more focused on rock, and eventually, jazz. He joined a band when he was in 8th grade, his dad often driving 14-year-old Simon to gigs at unremarkable locales around L.A. — a Thai restaurant, office lobbies, Borders Books on Sundays. After high school, he spent two years at New York University’s Tisch School of the Arts. “I wanted to learn how to (act),” he says. “I didn’t want to just try it through instinct. I knew how hard it was. I felt like I needed to have as much in my corner as I could.”

But he dropped out after two years to return to L.A., spending the next several years working in restaurants and bouncing around between sketch work (at the L.A. outpost of Second City, a “short and not incredibly rewarding” stint on Fox’s “Mad TV”), small supporting roles (the Will Ferrell vehicle “Old School,” Aaron Sorkin’s “Studio 60 on the Sunset Strip”) and a lot of failed pilots.

And then when he was 26, “Big Bang” happened. He was under contract on “Studio 60,” so he had to seek dispensation from Sorkin, even then a Hollywood heavyweight. “It was like asking Don Corleone for something,” recalls Helberg. “Uh, Aaron uh, I got this pilot…He wrote back: ‘You ungrateful piece of shit.’ And then he wrote, dash, dash, dash, ‘Just kidding. They’d have to pry the pen from my cold dead hands to stop writing for you.’ I saved it. If only it was a telegram, I would have framed it.”

The success of “Big Bang” felt sudden and all consuming — at its peak the show was watched by more than 20 million people each week, in its final season in 2019, it still had more than 17 million viewers.

“I’m on the air for 12 years and now it’s done,” says Helberg. “I don’t understand how time works. It feels in some ways like it never happened. I can’t imagine a time before it, but you never feel it when you’re in it.”

When I ask about persistent rumors of a “Big Bang” reunion, he laughs. “I don’t know what a reunion or a reboot would be. We just stopped (doing the show). It’s barely cold. Not to liken it to a dead body.”

As formative as the experience was, he has no interest in repeating it.

“These films,” he says, referring to “Florence Foster Jenkins,” “A Serious Man” and now “Annette,” “they are really where my taste lives, where my heart is.” 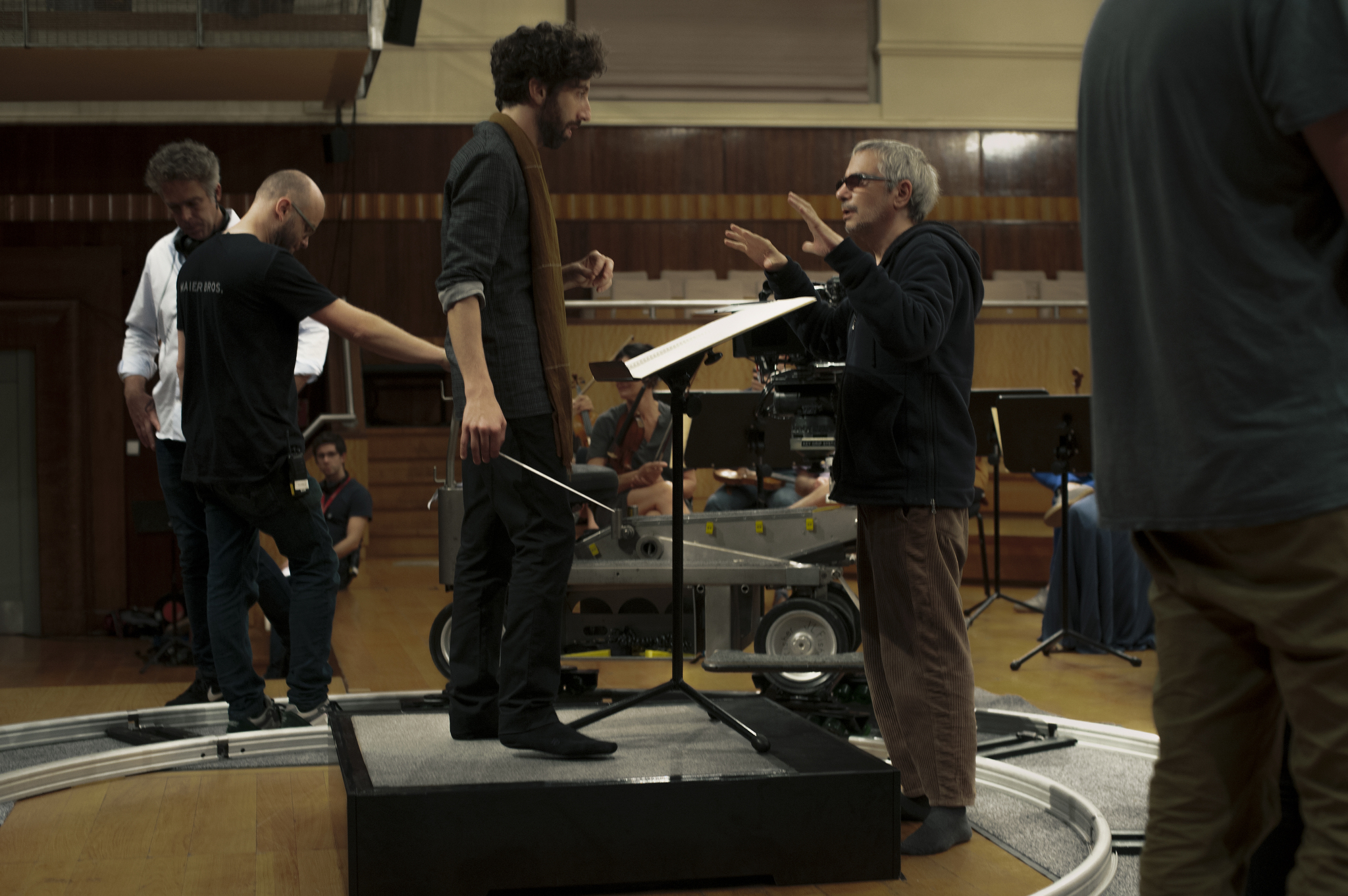 And so two years ago, Helberg found himself in a booth at Lucky Strike, the once-iconic, now-shuttered SoHo bistro. Across from him, sipping a grapefruit juice with just a little ice, sat Carax. Enigmatic and inscrutable, Carax had asked Helberg to send him a video of himself playing “I’m an Accompanist,” one of the songs from “Annette.”

“We sat in silence for a long time. At one point, he just looked at me and said, ‘So, is theeees your, eh, natural color,’” recalls Helberg, affecting a French accent. “He was talking about my face. He kind of pointed…,” he continues, making a circular motion with his index finger. “I said, ‘Well, I am wearing some rouge, but yes other than that.’ He did not laugh. I felt the light go out behind his eyes.”

At this point, Helberg had already embarked on a months-long odyssey to become a French citizen in order to land the part. (Carax needed a certain quota of European citizens in the cast and crew in order to secure EU funding.) Helberg’s wife became a French citizen in 2013; she was born in the U.S. to an American father and French mother. Their children attend Le Lycée Français in Los Angeles. And Helberg had toyed with the idea, but now he was attempting to compress a Kafkaesque bureaucratic process that can take years into a matter of months. It seemed impossible. He was desperate.

“I knew I would do anything I could to work with [Carax],” he says.

At one point, he found himself at a school fundraiser with the consulate general. “I started dancing with him and I felt his jacket, which was velvet. And I was like, ‘Ooh, you’re soft to the touch. I could just snuggle up.’ I was like flirting with him. It was like I was in the “Bourne Identity,” like maybe I can stick a tracking device on his neck.”

“It was a long road,” he continues. “I’ve retained no French. And the irony is at the very end, they’re like, ‘Oh, we actually didn’t need you to become a citizen because now we have Marion [Cotillard, who is French].’ I was like, ‘Oh, that’s fine. It was easy, piece of cake.’”

Another actor may have let the part go. But as Helberg’s friend Bialik notes: “Simon is a deeply committed person.”

It was worth it.

“A lot of what (Carax) did was kind of impossible,” says Helberg. “Massive scenes in one shot running through a Belgian forest in the middle of the night singing, going up and down stairs, falling into pools, all happening in real time while we’re singing live and I’m conducting a real orchestra. It was like a dance. He was the choreographer and we were part of his expression. I’ve never been in a film, where I felt so ready to surrender everything to (a director). And even when I see it, I feel like I’m just looking at this artist’s expression of life and love and loss. I don’t even feel beholden to my performance. I just feel very lucky that I got to be kind of a figurine in his world.”

“And I think that sometimes it’s the reason I get to do these jobs,” says Helberg. “Maybe I’ll just keep finding people who don’t watch television and want to hire me. Ultimately, if I can do enough of these things, maybe even the people that do watch our show can start to realize that we’re capable of accessing different parts of ourselves.”

Tags: ‘deeply, Commit, Helberg, is, Simon
You may also like
Recent Posts