During World War I and II they were known as Victory Gardens – vegie patches you’d plant in your garden or parks, to evade price hikes and shortages in shops.

Lettuce, tomatoes and spuds took little effort to grow and they were fresh and pickable, just out the back door. 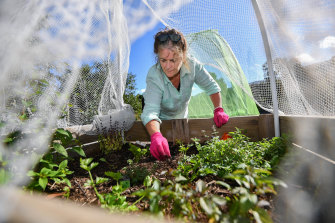 In the age of coronavirus, Australians are reviving the practice, with sales of vegie seeds and seedlings soaring.

Mail order organisation Diggers Club said so far in March it has sold 100,000 packets of seeds, most of them for vegetables, to its backyard garden clients, compared with about 30,000 for the whole of the month last year.

Andrew Mackintosh, owner of Aumann’s nursery in Templestowe, said fruit and vegetable seeds and plants were ‘‘flying out the door’’ with sales up 50 per cent on a normal week.

On Wednesday morning, he got a delivery of 200 seedling trays, each containing 120 seedlings, including broccoli, cabbage and lettuce, and most had sold out by day’s end. 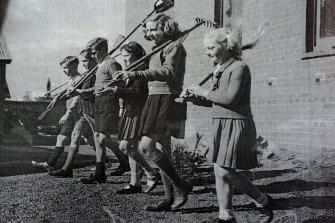 Students at Essendon Primary School grew their own vegetables to help the war effort.

‘‘On a normal day you’d probably go through 20 trays only,’’ Mr Mackintosh said.

Mr Mackintosh said supermarkets haven’t run out of produce but people are afraid they will.

James Wall, from Gardenworld nursery in Braeside said sales of seed packets and seedlings were up 30 per cent on a normal week.

He said growers are struggling to keep up. His nursery was selling out its weekly deliveries within two to three days.

Looking for some good news?

We could all do with some good news right about now. That’s why we have launched The Good News Group, a Facebook group where we’ll share uplifting, inspiring and positive stories and invite members to do the same. Join the group here.

Mr Wall said people ‘‘realise they’re going to spend a lot of time at home’’ and gardening was good not just for food production but for clients’ mental health, and could be done with children.

Paul Gale-Baker president of Sustainable Macleod said members have planted a wartime-style garden at their community compound near Macleod College, not just to share the harvest but to encourage locals to follow suit.

‘‘We think people are going to have to organise as a community as they have done before, to get through this,’’ Mr Gale-Baker said, ‘‘because it’s going to be tough’’.

Liz Lodge, 59, from Chum Creek, near Healesville, is planting to guard against a possible food shortage and because she won’t have to go to the shops as often and risk getting sick.

She bought 10 punnets of vegetables from Aumann’s on Wednesday including kale, broccoli, cauliflower and broccoflower.

She has already planted strawberries, cucumbers and zucchinis.

‘‘If I’m anywhere else, like in the supermarket or in the city, then I feel vulnerable.’’

Catherine Badcock, 36, a textile artist from Alphington, has stopped going in to the city for work and cancelled a UK holiday, and so starting a vegie garden is ‘‘doing something productive’’, she said.

This week, she joined Diggers Club and ordered a pack of seeds for radishes, kale, spring onion and beetroot to plant in her backyard.

‘‘I’m trying to look for positive things to do,’’ Ms Badcock said.

Tags: as, food, out, Seedlings, selling
You may also like
Recent Posts