Saddleworth Moor fire in 2018 exposed 4.5 million people across the northwest of England to dangerous levels of pollution and increased the number of premature deaths by 165 per cent, study finds

Around 4.5 million people were exposed to unsafe levels of microscopic matter during the 2018 Saddleworth Moor blaze, scientists estimate.

UK researchers say locals were exposed to PM 2.5 – particles under 2.5 micrometers in diameter – above levels deemed safe during at least one day of the fire.

PM2.5 pollution from the fires has increased the early date rate by as much as 165 per cent in Saddleworth Moor, they also estimate from computer modelling.

PM2.5 pollution has already been shown to be associated with increases in mortality from diseases such as heart disease and stroke.

The large wildfire, which broke out on the Moor and Winter Hill in June 2018, has left a legacy of poor health and earlier deaths due to pollution, they say.

Their study found that wildfires can have a significant effect on a person’s health even if they were unable to smell the smoke. 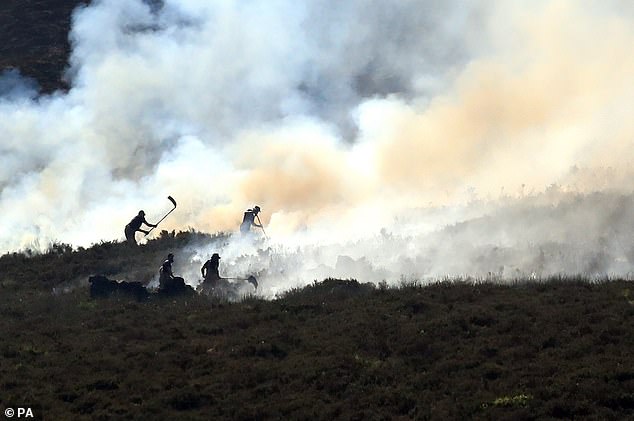 Firefighters tackle the wildfire on Saddleworth Moor in June 2018, which was declared a major incident by Greater Manchester Police. Scientists now say that 4.5 million people were exposed to PM2.5 above the recommended level set by the World Health Organisation on at least one day between June 23 and June 30

‘It’s clear from this study that the pollution from wildfires can have a significant effect on public health,’ the University of Leeds researchers say in their study, which has been published in Environmental Research Letters.

WHAT IS PARTICULATE MATTER (PM)?

PM is a mixture of solid particles and liquid droplets found in the air.

They are created from a variety of sources, including traffic, construction sites, unpaved roads, fields, smokestacks or fires.

Most particles form in the atmosphere as a result of reactions of chemicals such as sulfur dioxide and nitrogen oxides.

Some PM, such as dust, dirt, soot, or smoke, is large or dark enough to be seen with the naked eye.

Other PM is so small it can only be detected using an electron microscope.

‘When this smoke passes over urban areas it adds to an already polluted environment and can cause very poor air quality.

‘We should be aware that the smoke from wildfires can travel long distances, and can damage people’s health, even far from the fires.’

The inferno, which required support from the army and 100 firefighters, burned for three weeks and spread widely across the northwest of England.

It was one of many areas of the UK ravaged by fires that summer, caused by the usually hot and dry conditions.

To investigate the impact of the Saddlworth Moor fire, researchers used computer simulations to calculate the effect of the blaze on air quality and the resulting impact on health.

They used two models, including a scenario with no wildfire and a scenario where the effect of pollutants from the fires were included.

From this, they calculated the effect of the fire on air quality and then how many deaths were ‘brought forward’ due to PM2.5 pollution. 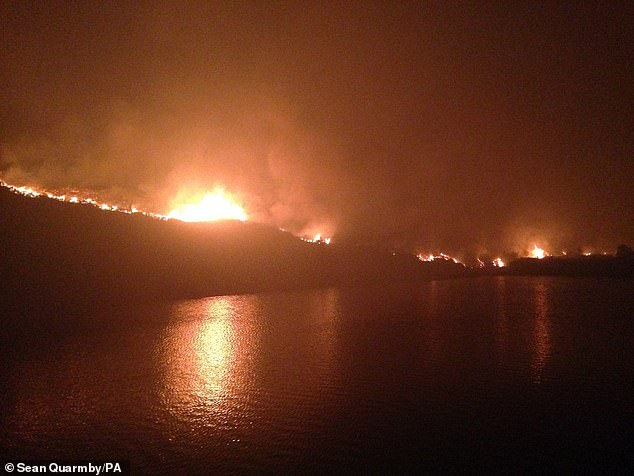 A number of homes were evacuated as fires on Saddleworth Moor continue to spread. The fires burned for roughly three weeks, 100 firefighters and the army attended and smoke from the fires spread widely across the northwest of England

‘Deaths brought forward’ is a measure of unfulfilled life expectancy – in other words, deaths that wouldn’t have occurred so early if it weren’t for pollution from the fires.

Deaths brought forward increased by 165 per cent in Saddleworth Moor and 95 per cent in Winter Hill, compared to if there hadn’t been a fire.

Local residents were exposed to levels of PM2.5 above what is deemed safe by the World Health Organisation (WHO) on at least one between June 23 to June 30, 2018, as the fire took hold.

In particular, the fires caused poor air quality over a large region of the north west, including Bolton, Wigan and Southport.

PM2.5 concentrations also increased by more than 300 per cent in nearby Oldham and Manchester and up to 50 per cent in areas up to almost nearly 50 miles (80km) away such as Liverpool and Wigan. 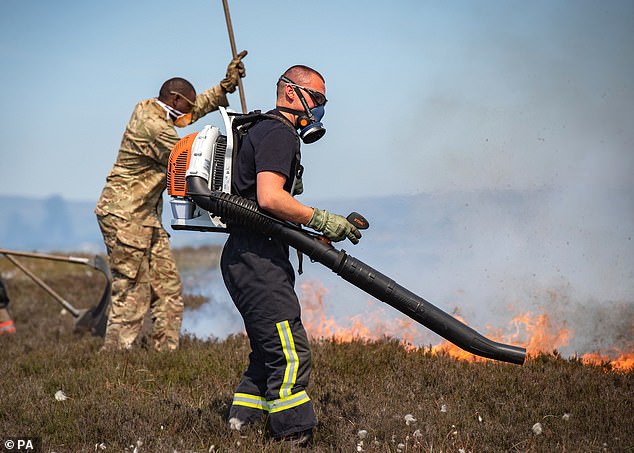 The 4th Battalion, Royal Regiment of Scotland, more commonly known as 4 Scots, as they helpws firefighters tackle the fire

‘Although people may not have been able to smell smoke, particulate matter was very high in areas far away from the fires, such as Southport and Wigan,’ the authors said.

‘Particulate pollution from the fires substantially degraded air quality over the north-west of England, leading the pollution levels much above the recommended levels.’

The authors also estimate the economic impact of the fires to be £21.1 million.

Large wildfires are relatively rare in the UK, and few have occurred close to urban populations, so there is little knowledge of their potential impact on public health.

Climate change scenarios predict that UK summers will become both hotter and dryer, which means wildfires are likely to become both more common.

The impact of wildfires on health, and the measures we have in place to prevent exposure to harmful air, is therefore becoming increasingly important, researchers conclude.

Saddleworth Moor suffered further fires in February 2019, during an unusually warm winter spell that registered a high of 69.08°F (20.6°C) in Ceredigion, Wales.

WHAT IS AIR POLLUTION?

From around 2020, town halls will be allowed to levy extra charges on diesel drivers using the UK’s 81 most polluted routes if air quality fails to improve.