A drop in cars on the road may be encouraging some motorists to drive at higher speeds and panic-buying of alcohol could be leading to increased drink-driving, a leading road safety expert has warned.

Victoria's road toll is still rising despite a drop in traffic due to COVID-19 restrictions. 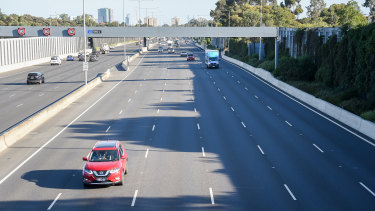 Peak-hour traffic on the Tullamarine Freeway on March 26. Credit:Justin McManus

Since businesses started enforcing working-from-home arrangements one month ago, there have been 18 road deaths – one more than during the same period last year.

As we enter the typically dangerous Easter period on Victoria's roads, the state's road toll sits at 75, only three deaths below 2019 levels, which was the worst year for fatalities since 2016.

Max Cameron, a road safety expert at the Monash University Accident Research Centre, cautioned against reading too much into a single month's road-toll data, but warned less traffic may not necessarily result in improved safety.

"Alcohol sales have also gone up, fortunately people are not drink-driving as much but of those who do, they're probably driving intoxicated to a greater extent and that all contributes to an increase as well."

"If we continue on as it is, there may be dramatic savings in death and serious injury, but it won't be as big as the drop in traffic suggests."

The Transport Accident Commission's lead director of road safety, Samantha Cockfield, said there had been an increase in road deaths between March 16 and April 6.

This is surprising, considering that traffic congestion throughout the country has fallen dramatically as people heed calls to avoid unnecessary travel.

A recent analysis from location data company HERE Technologies revealed 1.8 per cent of Melbourne’s major roads were congested, far fewer than the 19.8 per cent typically clogged at this time of week.

Toll operator Transurban reported a 17 per cent drop in traffic on CityLink in March – a greater fall in traffic than toll roads in NSW and Queensland.

By the third week in March, CityLink traffic fell by 21 per cent and by the final week, it had dropped by 43 per cent.

RACV general manager of public policy Bryce Prosser said the rising toll was a warning that more work needed to be done to make the roads safer.

"While motorists should not be leaving their homes unless it is necessary to do so, RACV is urging drivers to be extra cautious; safety should be front of mind given there is less traffic and higher travel speeds," he said.

Seventy-five people have died on Victoria's roads so far this year, which is higher than the five-year average of 68.

A government spokeswoman said people should be staying home over the Easter break unless they were buying food and supplies, accessing medical care, attending work or education, or doing exercise.

“It is everyone’s responsibility to drive safely and reduce the pressure on our health system – there’s simply no excuse for texting while driving, speeding or any other dangerous driving behaviour.”

Last year, 263 people died, which was a 23 per cent increase on the year before and the worst year since 290 people died in 2016. In the past week alone, eight people have died.

Tags: COVI, despite, on, rise, Road, toll
You may also like
Recent Posts