Researchers from Osaka University have developed a new kind of plastic that can be used to make watertight containers that are also biodegradable in certain kinds of ocean water.

The project was a joint effort from Osaka University and Nippon Shokuhin Kako Company, a Japanese agricultural giant that produces starch-based food products.

The team extracted starch from cassava provided by Nippon Shokuhin Kako and combined it with cellulose taken from wood pulp. 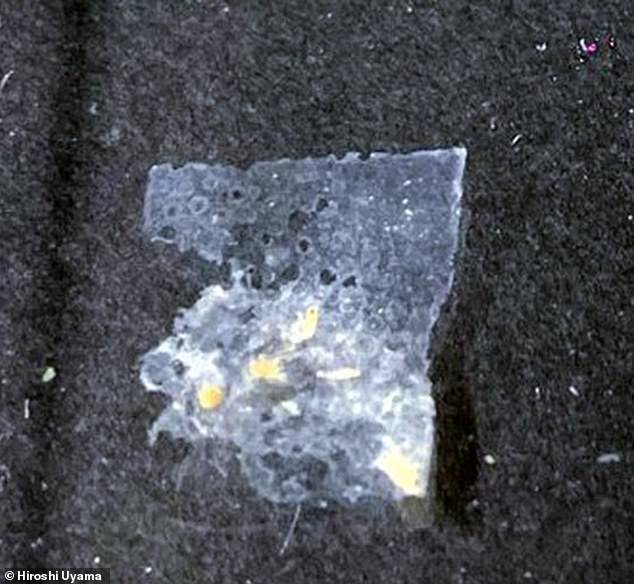 Researchers from Osaka University have developed a new plastic (pictured above) that’s both water tight and fully biodegradable in ocean water, depending on the levels of microorganisms present in the water sample

The mixture was dissolved in a water solution and spread into a transparent sheet that’s just 100 micrometers thick.

The sheet was then heated to turn it into a solid plastic, according to a report in the Asahi Shimbun.

The team says the resulting plastic is twice as strong as conventional plastic made from polyethylene, one of the main components in plastic bags.

To test its biodegradability, they placed samples of the new plastic in several different containers filled with seawater, each of which had varying levels of microorganisms in them.

The team found that the plastic fully broke down within 30 days in the seawater sample with the highest concentration of microorganisms.

In other containers with lesser amounts of microorganisms the plastic remained in tact after the 30 day observation period. 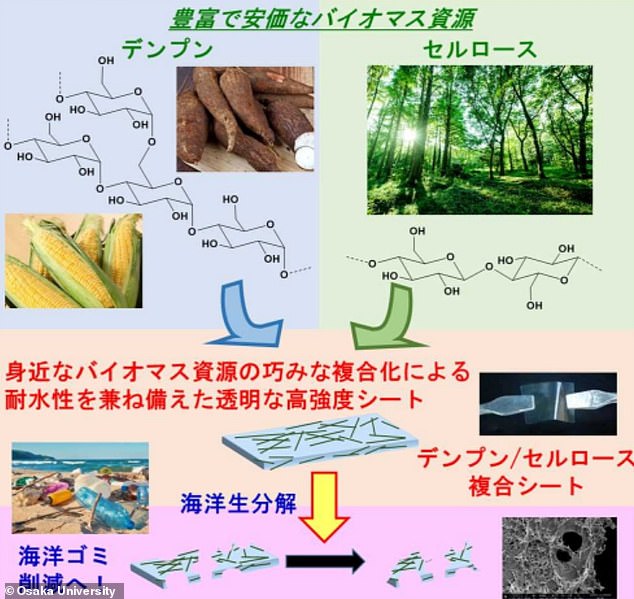 The plastic is made by blending starch from cassava and cellulose form wood pulp, dissolving the mixture in a thin sheet and then heating it to transform it into a solid. The resulting plastic is twice as strong as conventional polyethylene plastic

In comparison, a plastic bag in the ocean takes around 20 years to decompose, while plastic bottles can take as long as 450 years.

‘We would first like to use it as food packaging materials, which are very familiar to people and are often contained in the waste in the sea,” Osaka University’s Hiroshi Uyama said.

‘I hope that this will be a part of the solution to the issue and raise the interest of people.’ 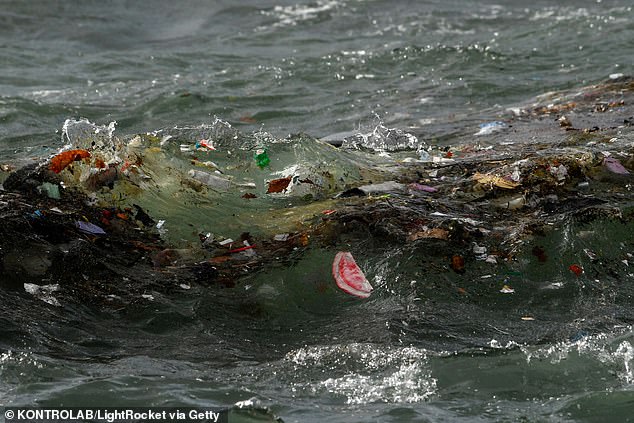 An estimated eight million metric tons of plastic waste are thrown into the ocean every year, with around 46,000 pieces per square mile of ocean

By 2050, The World Economic Forum estimates that microplastics in the ocean will outweigh all of the world’s fish.

The accumulation of plastic waste has posed a growing threat for sealife of all kinds.

According to the researchers, the turtles were drawn to the plastic because they still smelled like the food items they had once contained, making the turtles think they were edible.

The team from Osaka University hopes their new kind of plastic could cut down on the harm food containers and other plastic waste causes in the ocean.

‘Because these materials are cheap and the manufacturing process is simple, we can expect that the developed material will be put to practical use soon,’ Osaka University’s Taka-Aki Asoh told Anthropocene Magazine.

‘We have great expectations that our material will help solve the growing global problem of marine debris accumulation and have a major societal impact.’

HOW DOES PLASTIC KILL TURTLES?

Sea turtles live in the ocean and feed on vegetation and algae floating in the waters.

Unfortunately, many pieces of litter discarded by humans pollute these waters and resemble food.

The sea turtles mistake them for nutrition and consume them.

This plastic then enters their digestive tract and causes havoc to the animal’s innards.

A study in 2018 found eating a single piece of plastic increases the turtles chance of death.

Researchers found there it caused a one in five chance of death – rising to 50 per cent for 14 pieces.

Turtles have a digestive tract which means they are physically incapable of regurgitation.

Once something has been eaten, it stays in the animal unless it can be defecated.

Once inside the animal, if a piece of plastic covers an organ or blocks a key canal, it can create a fatal blockage.

Tags: develop, plant-base, Researchers
You may also like
Recent Posts