The MasterChef kitchen is the scene of your great triumph, being crowned the champion. How did it feel to return, walking back in for the first time?

I was pinching myself, [asking] “what am I doing back again?” The first one was a long time ago, nearly four years ago. I managed to win, then went on to do many things in the food industry. Now going back into the MasterChef kitchen, with new judges, new format, fans versus favourites … it’s unreal. 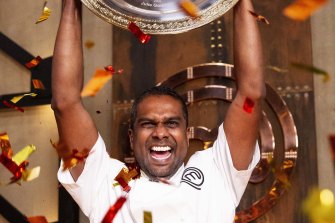 A couple of years ago they had a series where contestants who hadn’t won could have another crack at it. It’s easy to see why those guys wanted to come back on: unfinished business and all that. But you’d already won – why would you feel the need to return?

COVID was the reason I came back. Because in the last two years, as a business owner, I was focused on staying afloat. So the focus went from creating new cuisines to running a business. It stopped me being creative and was taking away my passion about food. So when they approached me about doing MasterChef again, I thought OK, this is going to be the perfect chance for me to go back again, rekindle my memories. I know there is a reason why I’m in this industry, so this will give me the opportunity to start my creativity again.

It revived your passion for food.

In the fans and favourites format, did you find the fans were awestruck by you and the other champions?

They were surprised to see us – they never expected past winners to be back again.

So when they auditioned they didn’t know the format?

They knew about the format, but they didn’t know it would actually be winners coming back [three past MasterChef champions return: Cheliah, Billie McKay and Julie Goodwin]. So when they saw the three of us walking through the doors, their jaws were down.

Being a fan competing on MasterChef against previous contestants could go two ways: the fans could be overcome by the star power and be unable to compete, or they could be super-motivated, driven to excellence by their desire to knock the celebrities down a peg … or at least to prove they’re worthy of being stars themselves. Did you find the fans to be tough competitors in the kitchen?

It’s totally different because in a commercial kitchen we plan everything ahead. If you don’t plan, you don’t prep and buy the ingredients and work it out, that dish will not be coming out perfectly for the customer. So you’ve got to take a lot of time and effort to plan and prepare. In the MasterChef kitchen it’s very spontaneous. Time is always an issue. For me personally, I always depend on what comes into my mind first. I’ll cook and I’ll make sure that it’s to the best of my ability. It’s two totally different environments, and having done this for the last three years, I’m going to have a bit of an issue adapting to the old MasterChef environment. It’s two different sets of skills.

I’ve been watching MasterChef for over a decade and for all that time I’ve wondered the same thing about the judges – both the original team and the current bunch. The judges seem like very lovely people, but when you’re cooking and they’re coming round your bench, poking in their noses and asking questions, I feel like to the poor contestant they might be the most annoying creatures on the face of the earth. Is that an accurate assessment?

You know, sometimes when you’re cooking, you think you’re doing the right thing. You’ll be very focused, then they’ll come by and ask you, “Are you sure that’s what you’re going to do?” That’s a mind game. But that’s the fun of the show. It’s also sometimes good to have the questions because what you think is right might turn out to not be the right decision. So when they ask you this question, you give it a second thought, revisit all the issues you’re facing to ensure you’re doing the right thing.

It’s gotten a bit more serious, because I’m cooking for business, for customers. The passion is still there, but the fun element has reduced a bit.