Princess Elisabeth of Belgium will have a ‘tough’ time at military academy where she’ll learn to shoot and read maps, a student reveals – as the royal family shares snaps of the 18-year-old out running

Belgium’s heir to the throne Princess Elisabeth is facing a change to her pampered lifestyle when she joins the country’s Royal Military Academy next year, according to fellow students.

The young royal, who was previously studying at UWC Atlantic College in Wales, is set to join the army in a move which has hit the headlines in her homeland.

The news comes after the Belgian royal family released new photos of the princess in training, jogging in the countryside amid lockdown.

One of the training school’s current students has offered insight into the course and some sage words of advice ahead of Elisabeth’s enrollment. 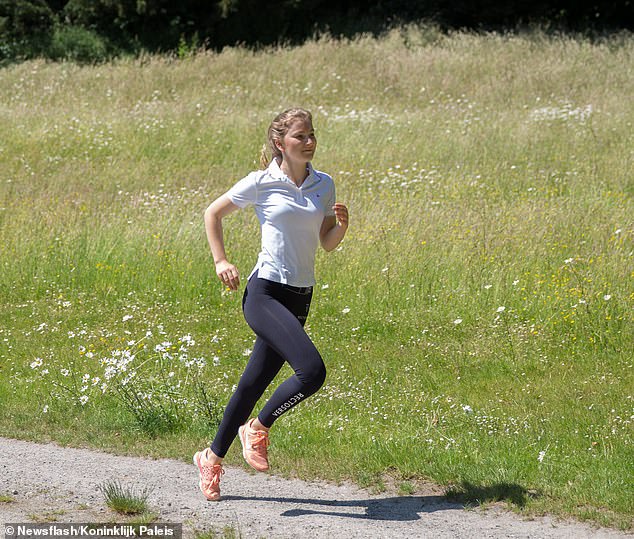 A current student at the Royal Military Academy of Brussels said life would be ‘tough’ for Princess Elisabeth of Belgium, 18, (pictured jogging) when she starts classes in the autumn

Evelyn Gravez, 22, has almost completed her master’s degree in social and military Sciences at the school.

She told local media: ‘My advice? Above all, make as many friends as possible. They’ll help you through if you’re having a hard time.’

Speaking about what life will be like for the teenage princess, Evelyn revealed her first weeks will include learning to fire a gun, setting up an army tent, marching with a backpack, tactical training and reading maps.

She added that the experience is ‘pretty tough’ and that ‘they really throw you in’. 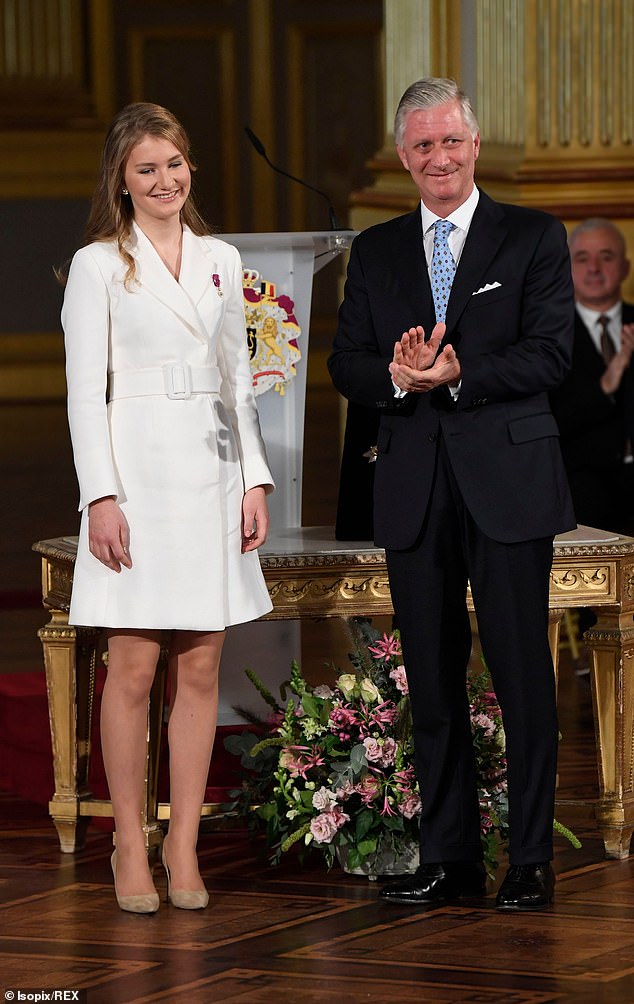 The Princess, who will become Belgium’s first Queen when her father abdicates, is following into King Phillipe’s footsteps. He attended the school from 1978 to 1981. Pictured with King Philippe on her 18th birthday last October 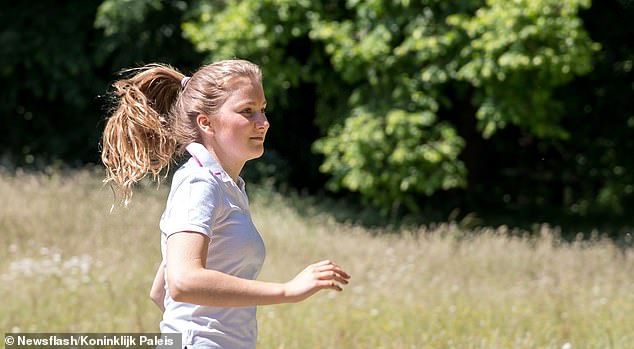 She also warned that the initiation period is not for everyone and that a number of students drop out each year.

However, Ms Gravez added that the camp is not like the cliches of military school often seen in Hollywood movies.

She added: ‘They don’t yell at you when you make mistakes. Of course, sometimes they have to be strict. Because mistakes, they have to be sorted out as quickly as possible. But if you are a bit slow to learn, they are there to encourage you, not to bark at you.’ 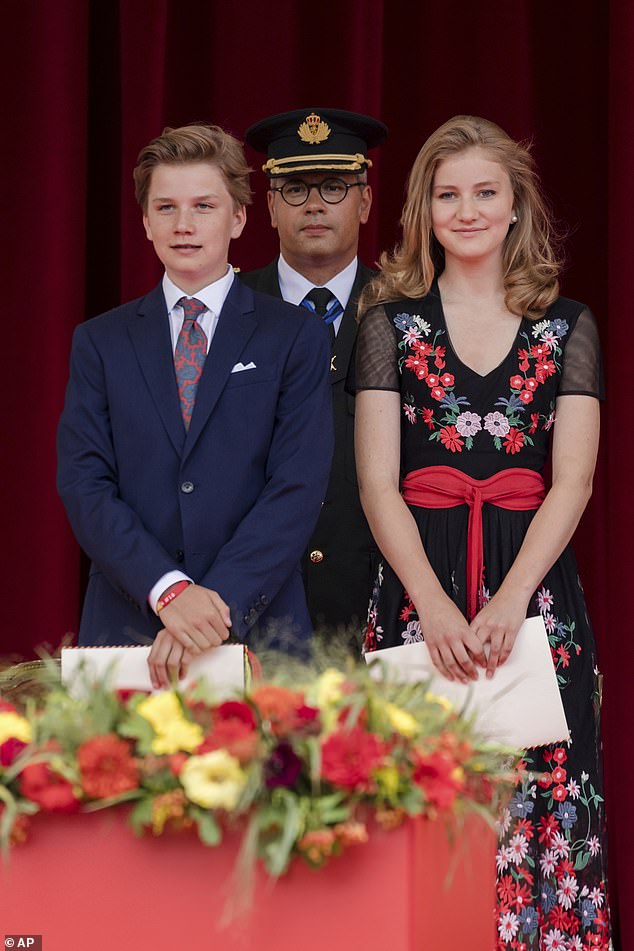 Although there will be tough days ahead, the student believes that the princess will get used to it and that it might even help her lead the country in the future.

She added: ‘I think Elisabeth will certainly get used to it. Even if she only stays one year.

‘We learn to make decisions under stress, leadership techniques. That will be useful for her as head of state.’

How Elisabeth will become Belgium’s first queen by birth

On turning 18, Princess Elisabeth  became legally old enough to rule without a substitute regent being appointed.

It means Elisabeth is now eligible to become queen on the death of her father, although given he is in good health and aged just 60 that is not expected to be soon.

When she does ascend the throne, Elisabeth will become the first ever Queen of Belgium by birth.

On its foundation in 1830, the Belgian constitution stipulated that accession to the throne was reserved for the descendants of Leopold I by order of primogeniture ‘to the perpetual exclusion of women’.

But the Salic law was abolished in 1991.

Elisabeth’s great-uncle Baudouin was on the throne at the time.

Her grandfather Albert II was King from Baudouin’s death in 1993 until he abdicated in favour of his son King Philippe, Elisabeth’s father, in 2003.

Elisabeth is the heir apparent to the Belgian throne – the eldest child of King Philippe and Queen Mathilde. A change in the law a decade ago made it possible for the eldest child, male or female, to ascend the throne in the country.

She will become the country’s first Queen Regent if she takes up the role.

Elisabeth spent 18 months boarding at UWC Atlantic College in South Wales before returning home to Brussels in March ahead of the government lockdown.

Like students across the country, the royal has been forced to finish her studies remotely and will not return to the school. She has spent the last two months living with her parents, King Philippe and Queen Mathilde, and her three siblings in Brussels.

The princess, who will receive her International Baccalaureate Diploma this summer, will complete a one-year course in social and military sciences.

There, she will learn in-depth about the four components of Belgian defense; Army, Air Force, Navy and Medical.

While in isolation at Laeken Palace, Elizabeth and her siblings Prince Gabriel, 16, Prince Emmanuel, 14 and Princess Eleonore, 12, have spent time volunteering.

They showed their support for Belgium’s elderly population by calling retirement homes and delivering baked goods.

Elisabeth’s younger sister Princess Elenore has been tagging along on some of her mother’s engagements, doing her best to help Belgium move forward from the pandemic.

On May 14 she accompanied her mother Queen Mathilde to a community kitchen providing meals for the homeless.

The following day she headed back to school, with her dad King Philippe wearing a mask as he walked her to the establishment in Brussels.

Tags: BELGIUM, Elisabeth, of, Princess
You may also like
Recent Posts