Popeyes – the fast-food chain that stoked frenzied demand in 2019 with the release of its chicken sandwich – is trying to draw just as much attention to its chicken nuggets that debut Tuesday.

This time, however, its marketing strategy doesn't involve taking digs at competitors on social media.

On July 27, the company's "We come in piece. 8 piece" campaign kicks off, commemorating the first day its chicken nuggets hit stores across North America.

As part of the campaign, Popeyes pledged to buy the cash equivalent of 1 million nuggets from its competitors, including McDonald’s, Wendy’s, Burger King and Chick-fil-A, as well as its own, through its charitable arm, The Popeyes Foundation.

The company poked fun at how this gesture was a way to end the "chicken sandwich wars" of 2019, which ensued after Popeyes released its crispy chicken sandwich, threatening other major competitors known for selling the menu item. 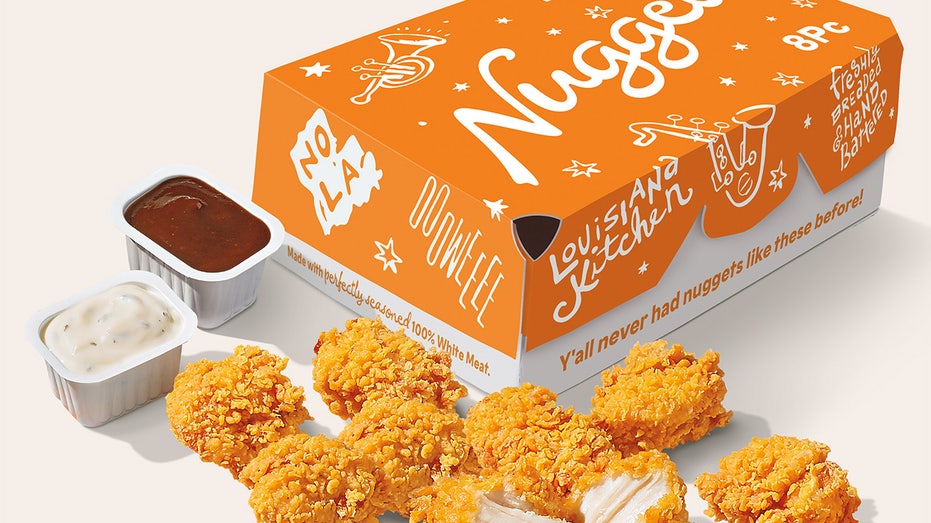 Popeyes is debuting its new menu item in North America on July 27. (Popeye’s)

The food will be donated to the Second Harvest Food Bank of Greater New Orleans and Acadiana, according to the company. Popeyes also promised to match any customer donation up to $25,000.

In 2019, Popeyes became a trending topic on Twitter after throwing social media jabs at Chick-fil-A over which brand had the better fried chicken sandwich.

It was a win for the chain, which saw countless customers flock to its stores in order to try the sandwich and rate it against its competitors. Fans began weighing in on social media as to which sandwich they liked better among the major fast-food chains.

Popeyes' strategy was so successful that the sandwich sold out within two weeks and even propelled the company to one of its best quarters in almost two decades.

"The launch of our Chicken Sandwich was incredible, and we’re humbled by the amount of love and positive reviews, but at the same time many claimed that it started the chicken wars," Popeyes Chief Marketing Officer Bruno Cardinali said.