There are plenty of ditches and bogs for prime ministers to drive into when they try to deliver an election promise, but few of them are as galling or as painful as the ones where they need state premiers to help them get the car out of the mud.

Anthony Albanese has been stuck on a dirt road in a downpour in his quest to get energy prices down, spinning the wheels of the federal four-wheel drive while the premiers offer advice from the side of the road. And his only way out is to give the states what they want. 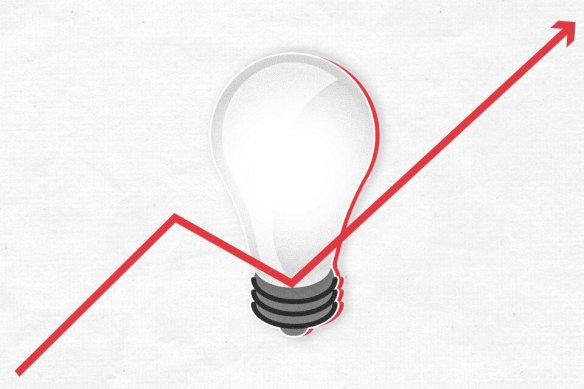 Treasury has forecast a sharp spike in energy prices.Credit:

The energy quagmire would send anyone spare, but the prime minister has to deal with it while holed up in Kirribilli House with COVID-19. As if he needed any more headaches.

By rights, this is not the prime minister’s problem to solve alone. He promised during the election campaign that his climate policies would cut $275 from energy prices, although he made this a forecast for 2025 rather than a deal to be done by Christmas. What mattered was that he stood for lower prices. What changed was the full impact of the global energy crisis. That is when Albanese volunteered to find a fix.

Albanese walked into the trap of raising expectations in a field where state premiers decide the outcome. The states own the coal and gas. In Queensland, they also own the generators. The states make decisions about their electricity networks, even if the east-coast grid has shared regulation.

This means the states have an obligation to keep power prices down for their households and their manufacturers. None of that mattered, however, when the federal government told Australians in the October 25 budget papers that electricity prices would jump 56 per cent over two years and gas prices would rise 44 per cent.

This was a mistake, pure and simple. The government told voters about a problem and then realised, too late, that it needed a solution. Fast. It was always going to need to level with voters about the price forecasts at some point, of course, but it revealed them in a way that fumbled the politics.

It is not as if the problem was a shock. Albanese and key ministers such as Treasurer Jim Chalmers and Energy Minister Chris Bowen had been through the energy crisis of June when coal supplies fell short, generators struggled with demand and prices soared. Then everything went quiet, only for them to scramble again at the end of October for another round of crisis management.

Federal ministers have been full of assurances in their radio and television interviews in the past few weeks, sending a message that everything is going smoothly. Behind the scenes, however, some of the states see it as shambolic. The message from Canberra to the states on Tuesday night, for instance, came in the form of a series of dot points to sum up key principles. There was no lengthy analysis of how the changes would work or what they would do to prices.

While distant observers write about details of the plan being briefed out, that gives a misleading impression of an orderly process. Most of what is known about the federal proposal is only known because of sporadic leaks. The truth is that Canberra has been clear about what it wants but utterly vague about what it will do – in hard, real policy – to achieve its goal.

Week after week, the federal government talked about a “code of conduct” for gas companies as if a piece of paper would get a result. Then it became clear that action on coal prices would have to be part of the fix. This made a deal with the states essential and yet nobody explained how that deal would work.

Nature abhors a vacuum. Journalists abhor an information vacuum. So, the states became the story. Queensland Premier Annastacia Palaszczuk threw a bomb into the whole process on November 29 with a simple declaration – “hands off our generators” – and shattered the pretence that the feds were in control.

The premier is talking her own book, of course. Palaszczuk is protecting coal-fired power generators owned by the state because their profits are so important to the state budget. And she is expecting $10.7 billion in royalties from coal this year alone.

The dynamics are different in NSW, which does not own its generators, but Premier Dominic Perrottet has the same self-interest in keeping federal hands out of state coffers. NSW expects royalties of $3.6 billion from coal this year.

Both states like to talk about their assistance payments to households, but they are not keeping bills down. The last Queensland payment, worth $175, would cost about $350 million if it went to every household – small change compared with the royalty bonanza.

Victorian premier Daniel Andrews has stayed out of this fight because his interest lies in Albanese getting a deal. The price hikes forecast in the federal budget would add about $1300 to average household bills for electricity and gas over two years, but Victorian customers could be hit harder – they use twice as much gas as NSW customers and eight times as much as Queenslanders.

When a deal is done at national cabinet on Friday – helped by a compensation scheme at federal cost – Andrews should send Albanese a thank-you card.

A deal will be done because all sides need it done. No premier can stand in the way of power price relief, even if it is modest. NSW will accept a hit to coal royalties, while Queensland might do the same – as long as they get payments from Canberra to help cut costs for electricity generators or retailers.

Albanese has treated the premiers very gently. At no point has he gone public with a hard statement about the onus on the big states to bring prices down. His goodwill comes at a cost, however, because it means paying the states to do what they should have done themselves.

The question after the deal will be whether the prime minister takes a less generous approach to the next negotiation when federal and state duties overlap. In the end, after all, every policy challenge ends up in the same place: a haggle in a car yard.

The Opinion newsletter is a weekly wrap of views that will challenge, champion and inform your own. Sign up here.