Take that, naysayers! Padma Lakshmi has a stern message to deliver to a handful of social media users who criticized her for appearing without a bra in a cooking tutorial she shared via her Instagram account earlier this month amid the coronavirus crisis.

“I got some comments last time that it was immoral for me to not wear a bra in my own kitchen during the quarantine,” the Top Chef host, 49, quipped in a new Instagram cooking video shared on Monday, April 13. “So those people should be happy to note that I’m wearing two today 😂.”

Added the Love, Loss, and What We Ate author: “ But seriously, let’s not police women’s bodies in 2020 ok?” 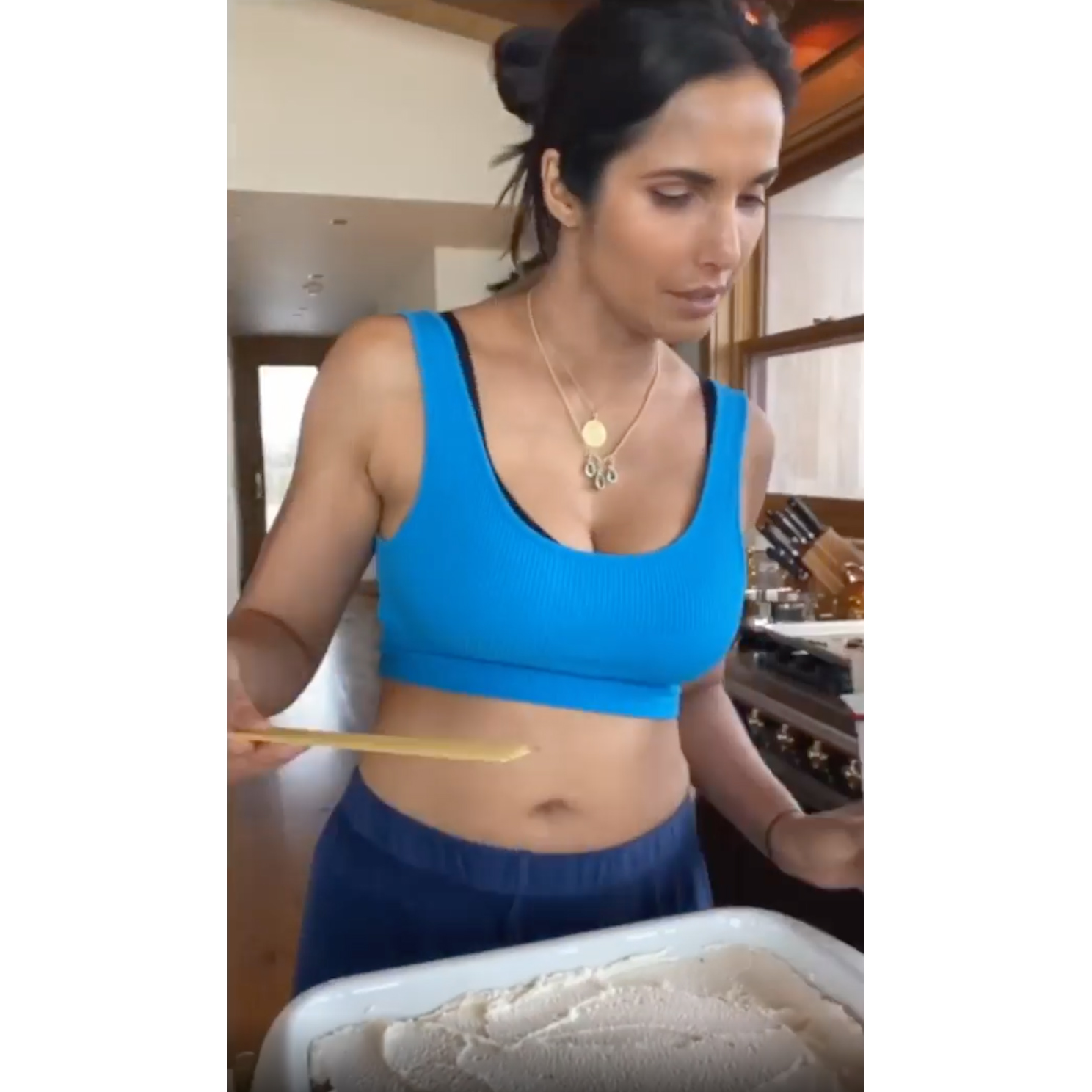 The strongly worded retort comes a few days after Lakshmi shared a video of herself showing off her knife skills and whipping up a chicken tagine. In that clip, which was shared via Instagram on Friday, April 10, the culinary pro is wearing a gray dress, seemingly without a bra underneath.

“Is no one going to comment on why she feels the need to put her nipples on social media in every video? No?” one Instagram user wondered in the comments. “Just sad.”

Another user took note of Lakshmi’s quarantine outfit and wrote: “She has no bra on. Well that made the cooking tutorial much more interesting😂👍.”

As India native promised, she is in fact wearing two sports bras in Monday’s video, during which she showed her followers how to make lasagna with white ragu.

(I got some comments last time that it was immoral for me to not wear a bra in my own kitchen during the quarantine. So those people should be happy to note that I’m wearing two today 😂) But seriously, let’s not police women’s bodies in 2020 ok?

Additionally, many of her followers showed their support in the comments of her most recent how-to — bra or no bra. “LET THOSE PUPPIES HANG PADMA,” declared one commenter.

Another took issue with a certain word some naysayers used to attack the earlier post. “Immoral? I literally made dinner tonight with no pants.”

The fact that Lakshmi took her critics to task is no surprise, especially since she’s been very open about how comfortable she is with her body in recent months. “I haven’t had time to diet, so I’m about 146 pounds right now,” she told Us Weekly exclusively on the Emmy Awards red carpet in September 2019. “I’m lucky because I gained weight exponentially, everywhere. I don’t care. I was just happy there was a dress this pretty that fit,” she said of the ethereal blue Christian Siriano gown she wore to the ceremony. “And at the end of the day it’s just about feeling comfortable. I’m done trying to squeeze my bum into something that is too small. I don’t care.”

The Tangy, Tart, Hot and Sweet author continued: “You know, it shouldn’t be about what I look like at this point in my career.”

Tags: after, back, Claps, Lakshmi, Padma
You may also like
Recent Posts