This week The Sydney Morning Herald and The Age restart publishing political research, with the launch of the Resolve Political Monitor (RPM).

You’ll notice a few differences from the way we used to conduct and report polling. Firstly, we do collect voting intention – emulating as closely as possible the real ballot paper ranking without an “undecided” option – but no longer report two-party preferred results. 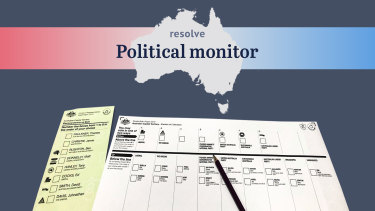 The Resolve Political Monitor takes an approach similar to political parties in their private research.Credit:

Our readers told us in the past they did not appreciate the ‘horse race’ nature of the way we reported the results of TPP questions and they wanted something deeper.

It wasn’t just that all the major polls, including the one published by The Herald and The Age, predicted a TPP win for Labor at the last election, although that was clearly a factor in our new approach. Years of leadership contenders using polling as a justification for knifing incumbent prime ministers led, understandably, to the perception the polling was distorting politics, not just examining it.

I have written before about how we needed to consider the impact this ‘horse race’ approach had on our reporting during the last federal election.

Chief political correspondent David Crowe, political editor Peter Hartcher and I have had countless conversations with people in the political research sphere since then and we all agreed we too wanted something deeper – why are voters responding the way they are – which is how we formulated this new plan with RPM.

RPM is conducted by Resolve Strategic, a firm run by Jim Reed, who has more than two decades of experience doing research for businesses and political parties.

“While we do collect people’s full preferences in a numbered ballot paper, it is their first choice that is the most important and reliable indicator of who truly likes you and wants you to govern,” says Reed.

“Many people aren’t thinking about their vote right now, let alone the people they might give their fifth or sixth preference to, and you can win with less than 50 per cent of the TPP vote anyway.”

What people are thinking about is how they’re travelling themselves, in their own families and households, as we adapt to life under a global pandemic, and they’re thinking about how our leaders are performing in their response to this extraordinary challenge.

So as well as voting intention and preferred prime minister, which gives us an overall sense of how voters view our political leaders, we’ve asked an array of questions relating to people’s outlook and confidence, their views of the handling of a range of issues, and which particular areas of policy and leadership impacts their vote the most.

It’s an approach similar to that taken by political parties in their private research.

This first survey has a sample size of 2000 Australian registered voters and employs a combination of telephone and online interviews. It contains detailed state-by-state quotas and weighting for area, age, sex, education, income and marginal seats to ensure it truly reflects the voting population.

After this first baseline survey RPM will conduct monthly ‘tracking’ surveys with a sample of 1600 online participants. The 15-minute interviews allow the collection of a large amount of quantitative and qualitative data, much of which will be published in a permanent data centre you can explore here.

“Most published polls ask people’s vote and leadership preferences, but the real value is in uncovering what’s driving all that through an array of deeper questions and open-ended responses,” says Reed.

“Private party polling is more about understanding what is going on and helping decide what to do about it. We are not going so far as to write the parties’ strategies for them, but we are applying exactly the same tools to explain the headline results.”

The survey also measures people’s general outlook, how optimistic or pessimistic they’re feeling about their own situation, and their outlook for the country.

“The electorate’s outlook is critical to understand because if there’s a mood for change or personal uncertainty it can totally change the configuration of a political contest,” says Reed.

There’s a lot to digest from the first RPM survey, and some of it will come as a surprise to those whose political radar is tethered to the temperature of an issue on social media. We can’t put all of it in the data centre because of the scale of the results, but we will report on as much of it as our readers find interesting.

David Crowe will be writing news, analysis and features all week. The next survey will go into the field straight after the federal budget in May. We might change things in the survey as we learn what’s most relevant, and we plan to add more metrics to the data centre as we go. As always, we welcome your feedback.

Tags: Away, Does, new, polling, The, with
You may also like
Recent Posts