Almost everyone knows that surfer Stephanie Gilmore is striving for a record-breaking eighth world title.

For those who love surfing and follow the women’s tour, her end of season charge for the 2021 Rip Curl WSL Finals has eyes popping. 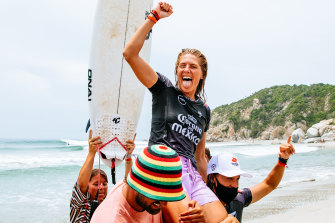 Until her victory against Malia Manuel at the Corona Open Mexico, Gilmore had been unable to dominate a championship tour event this year, and she unceremoniously crashed out of the Tokyo Olympics. She also had failed to win a major event since 2019 and was last world champion in 2018.

Now, the Queen of surfing is back in the hunt.

Surfing commentators are practically bouncing up and down in the chairs over whether the Australian surfer can win her eighth world title with her elegant surf lines, explosive performances, paddling strength and wave reading skills. The World Surf League machine, built on digital broadcast platforms and social media audience engagement, is in overdrive.

For the first time in the sport’s history, the top five men and women surfers are competing for the world championship title in a winner-take-all event at Lower Trestles in California, starting possibly on Sunday morning (Australian time), but more likely early next week.

The women’s finals, courtesy of Gilmore, has a number of breathless narratives. Can the veteran who transfigured modern surfing claw her way through three knockout heats to take on top-ranked and Olympic gold medallist Carissa Moore in the best of three heats? Will fellow Australian and third ranked Sally Fitzgibbons derail Gilmore’s heats run and win her first title? Can Gilmore surpass another Australian Layne Beachley to win eight world titles and become the women’s surfing Greatest of all Time?

The chance of being hailed the GOAT, one of the most unfortunate acronyms ever attached to a sentient being, awaits. For the media, surf fans and everyone inside the WSL hype bubble, this moment is … HUGE!

That is, until you ask Gilmore.

“We are all just bits of dust particles floating on Earth, so I’ve never been able to take things too seriously, but at the same time I do know how much it means to me,” she says. 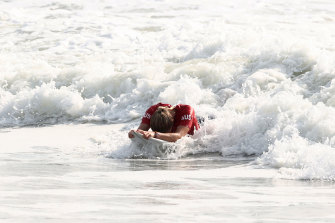 Stephanie Gilmore of Team Australia reacts after losing her Women’s Round 3 heat, eliminating her from the competition, on day three of the Tokyo 2020 Olympic Games.Credit:Photo by Ryan Pierse/Getty Images

“You never know what life will throw at you, look at COVID, so if you can just be like water and kind of flow with it, enjoy yourself and be respectful to the people around you, that’s what I strive for.”

It’s not every day an athlete drops a bit of Epicurean philosophy to deflate the hype. Unwittingly, or perhaps deliberately, Gilmore is exempting herself the anxieties of fellow finalists, imposing a champion’s distance between her and, most importantly, them.

Interestingly, Gilmore has worked with mindset coach Ben Crowe, who also has advised tennis player Ash Barty. Crowe defines success as knowing that you’re worthy of chasing your goals and dreams, regardless of whether you achieve them. The surfer also credits her family upbringing in far northern NSW for this outlook.

Gilmore revels in the joy of best. She excels moving between lithe and athletic, exercising uncanny anticipation and displaying an ability to read and, at times, manipulate opponents. There’s also an ability to navigate the ugly.

“I’m lucky in my life that I have a professional sport where I’m able to challenge myself and test things out all the time,” she says.

“The ocean is forever changing and the challenges are just forever changing as well. I always want to be the most impressive on the wave. I’ve won events before where I actually don’t think I wasn’t too excited on my performances throughout the event. But I just think that I really held it together strategically in different heats.

“I know that some people don’t like that feeling, but I think it’s great for people to be pushed outside their comfort zone and see how they perform, and then figure out ways that they can deal with it, and still make good decisions, good decisions under pressure.”

Excited and intrigued by the WSL finals at Lower Trestles, where she has won an event and scored a perfect 10 score for a ride, Gilmore says the new winner take-all, knockout format will be her greatest challenge.

The physical demands of potentially six heats, lasting 30 minutes each, will be incredibly taxing. There will be no jet-ski assists to ferry surfers back out to the line-up after they’ve completed a wave. It’s all woman-power, Gilmore says.

“If I win I will be in a state of disbelief,” she says. “To come from such a low ranking and take the world title in the last event of the year, that would be something to celebrate.

“I’d probably drink a lot of tequila and have a great time if I did.”

Tags: Challenge':, greatest, my, Steph
You may also like
Recent Posts