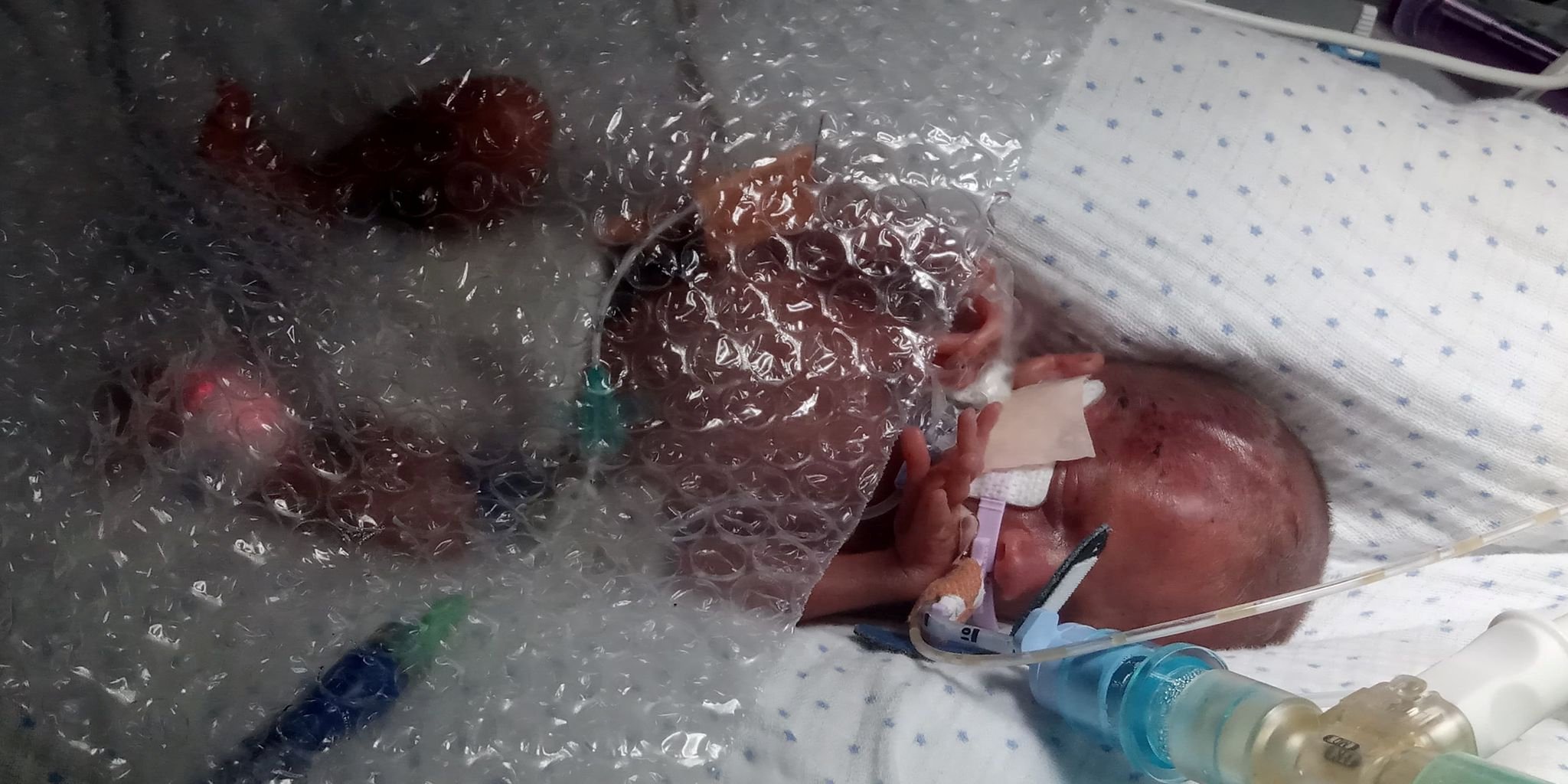 A new mum has told how her baby was so small when he was born she mistook him for her placenta.

Little Casper Richards arrived on 4th May 2021 at 24 weeks and was given just a 30% chance of survival – having just tipped the scale at just 1lb 8oz.

Mum Gemma Richards, 27, had been getting ready for work when she experienced some bleeding – something she dismissed as she had experienced it with her three previous pregnancies.

But within an hour the mum-of-four found herself in excruciating pain causing husband Gareth, 33, to phone for an ambulance.

Carer Gemma taken to Royal Cornwall Hospital, Truro, for what she believed to be a routine check-over but woke up hours later with doctors telling her she had given birth.

Casper was then transferred to St Michael’s Hospital, Bristol, where he has remained in the ICU unit for over a month.

Mum-of-four Gemma, from Constantine, Cornwall, said: ‘It’s all a bit of a blur to be honest.

‘I remember a bit of bleeding in the morning but I didn’t think anything of it.

‘My husband phoned for an ambulance and when I arrived at hospital the doctors said I had some sort of infection and that at any minute could pass onto Caspar.

‘The specialist team were telling me it would be safer for the baby to come out than be in.

‘When I woke up he was so tiny. To be honest because he was in a little ball I thought he was my placenta.

‘It wasn’t until he was turned around that I realised I was looking at my baby boy.’

Last month doctors were forced to perform emergency surgery on Casper which saw part of his bowel removed and a stoma fitted, extending both Gemma and the five-week-old’s stay in hospital.

Because the family’s other kids can’t all stay at the hospital with their mum and Casper, they’re at home with dad, Gareth, 33, 200 miles away.

Neither the siblings or Gareth have been able to hold little Casper yet due to Covid restrictions.

Gemma is now desperately trying to fund accommodation for Gareth and siblings Lizzie, 7, Tyler, 5, and Oscar, 2, so they can travel from Cornwall to be there with them.

Gemma added: ‘It’s hard enough being in a pandemic but to go through one of the scariest moments of your life without your family is hard.

‘My main concern is obviously Casper and we all just want him to get better.

‘He’s recently had some surgery so he will be in here for a while. Hopefully soon the surgery will be reversed and his bowel can be reattached.

‘We’re going to find out more in the time to come but right now we just take it day by day.

‘We really do just want to thank anyone who has helped us so far with this, we are just so grateful and we really want to be together’.

You can donate to the family via their GoFundMe page.

Get in touch at [email protected]

Tags: Baby, mums, Pregnancy
You may also like
Recent Posts