Australian businesses will be encouraged to invest in plug-in hybrid and electric car fleets in an attempt to increase private uptake by flooding the second-hand market with new vehicle technologies at lower prices.

The Morrison government has ruled out offering taxpayer subsidies for the private uptake of plug-in hybrids and battery electric cars, arguing in its long-awaited strategy that subsidies would not represent value for money in efforts to drive down carbon emissions. 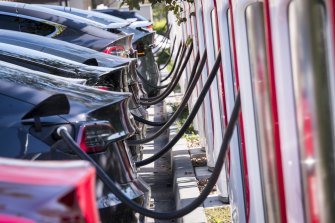 The Morrison government has ruled out subsidies for electric vehicles, and is prioritising transition of commercial fleets.Credit:Bloomberg

Energy Minister Angus Taylor will argue a “fleet first” strategy for new technology passenger vehicles is the smartest way to help Australia’s “planned and managed” transition to low-emission cars, while ensuring charging infrastructure and the national energy grid can support a switch.

Low-emissions vehicles are a key plank in the government’s technology road map, which it will rely on if it is to meet both its Paris emission targets and a potential commitment to net zero by 2050.

Releasing a discussion paper informing the development of Australia’s Future Fuels Strategy, the federal government has identified five priority initiatives it says will make the most impact, including commercial fleets, essential infrastructure and improving information to motorists.

The strategy argues subsidising cars for private sales would cost taxpayers $195 to $747 per tonne of carbon dioxide equivalent, depending on the vehicle type and usage. It said that figure did not present value-for-money when compared to the Emissions Reduction Fund price of $16 per tonne of carbon emitted. 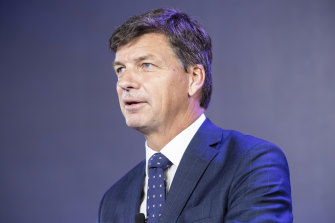 “We are optimistic about how quickly the technology cost will reduce for other electric vehicles compared to traditional cars, making it an easier choice for consumers,” Mr Taylor said.

Industry experts have criticised the federal government outlook for electric vehicle uptake over the next decade. They argue projections of 26 per cent in December’s Australian greenhouse gas emissions trends to 2030 were overly optimistic because it assumed numbers would spike despite a lack of policy and new state taxes slugging clean cars.

Several car manufacturers, including General Motors, have pledged to end production of petrol engine vehicles within the next decade while Britain has set a 2030 target to ban combustion engines.

The EV sector has also claimed the decisions by Victoria and South Australia to aim road-user taxes at drivers of electric vehicles would prevent the states from reaching their goal of net-zero greenhouse gas emissions by 2050.

The plan justifies a focus on fleets because business vehicles generally travel greater distances than private vehicles, delivering better value-for-money through fuel and maintenance savings from new technologies and offsetting the price premium of buying the new technology.

In 2020, 40 per cent of light vehicles in Australia were sold to businesses.

“This benefits the second-hand market and provides private consumers with second-hand vehicles at lower prices.”

Mr Taylor said the strategy would be underpinned by “significant” government investment, including the $74.5 million Future Fuels Package to invest in charging infrastructure at workplaces and in regional “blackspots”.

A move to electrify Australia’s passenger vehicle fleet was a centrepiece of the 2019 federal election campaign as the Morrison government aggressively criticised Labor’s election pledge that half of all new cars sold in 2030 would be electric.

Mr Taylor said the Coalition’s policy was focused on enabling consumer choice and supporting natural uptake, with government modelling showing Labor’s EV policy would have increased the price of cars by up to $4863 to “force people out of the cars they love and into EVs”.

The transport sector makes up 18 per cent of Australia’s carbon pollution with passenger vehicle emissions projected to drop 1.2 per cent every year to 2030 amid greater uptake of hybrid, electric and fuel-cell vehicles in the national fleet.

Electric Vehicle Council chief executive Behyad Jafari has described the federal government as out of step with other leading economies over its electric car future.

Following leaked details of the strategy in December, he said Australia was “miles behind” in the transition.

“In the US, drivers are offered a $10,000 tax rebate for buying an electric vehicle, and American consumers get access to much cheaper electric vehicle options because of their long-standing vehicle emission standards,” he said at the time.

Tags: government, Morrison, out, rules
You may also like
Recent Posts