A mother revealed how she made her children their own McDonald’s ‘fakeaways’ in lockdown.

Danielle Culley, 33, of Tamworth, Staffordshire, prepared the surprise dinner for her son, Oscar, four, and daughter Lily, six, who have been missing their favourite fast food.

Single mother Danielle, who cares full-time for Lily, who has autism, told how she gave the children cheeseburgers, chicken nuggets, fries and Pepsi Max, all wrapped up in replica McDonald’s packaging. 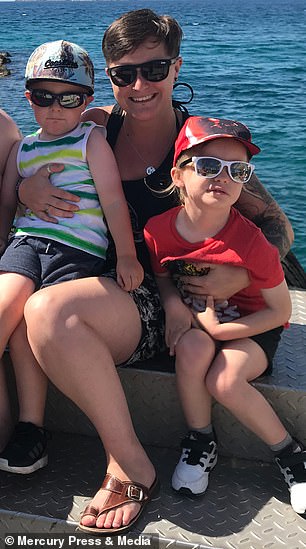 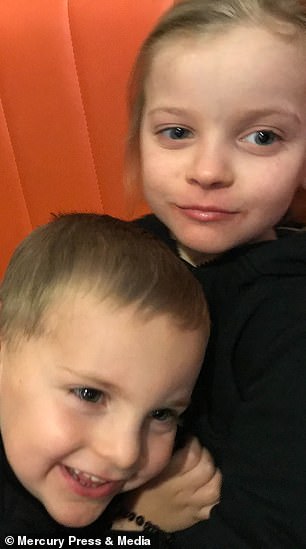 Danielle Culley, 33, of Tamworth, Staffordshire, prepared the surprise ‘fakeaway’ for her son, Oscar, four, and daughter Lily, six. Pictured, Lily and Oscar (right) and with their mother (left) 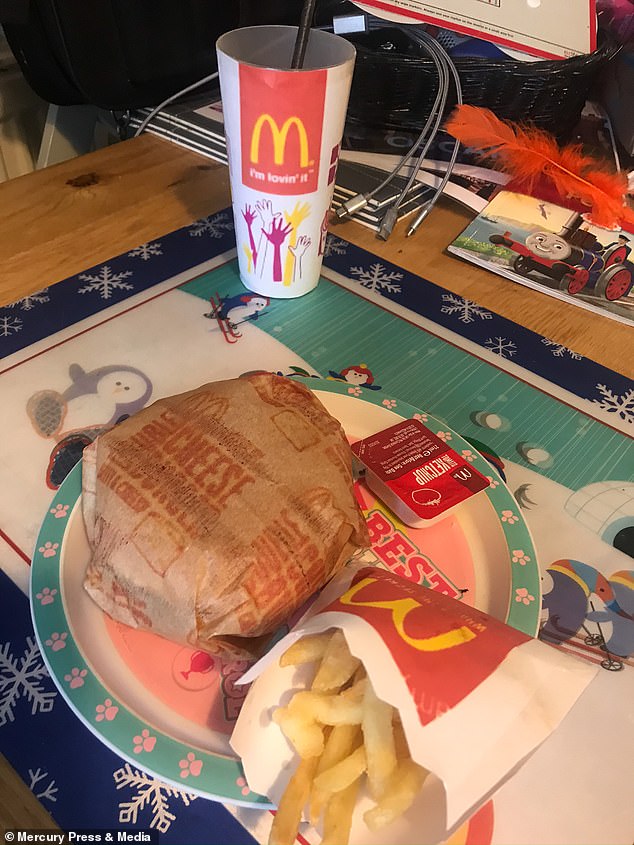 Danielle told how she gave the children cheeseburgers, chicken nuggets, fries and Pepsi Max, all wrapped up in replica McDonald’s packaging. Pictured, the clever ‘fakeaway

She said: ‘With McDonald’s being closed and not being able to out to the park, I felt the kids were missing out. I wanted to bring a little treat back to the house.

‘It was a little bit of fun – I kept it all secret until I had finished preparing the food and got it all laid out on the plates in the packaging.

‘When they saw it, they stood there like, “Oh my God”. My son shouted, “I can’t believe you found one” because he knew McDonald’s was closed.

“I said, “it’s mummy’s McDonald’s” and they devoured it, which was really nice to see.

“My son said it was better than the real thing, apart from the cup not having a lid. And my daughter said it was nice that we didn’t have to go out the house to eat it. They liked that I put their names on the back of the packaging. 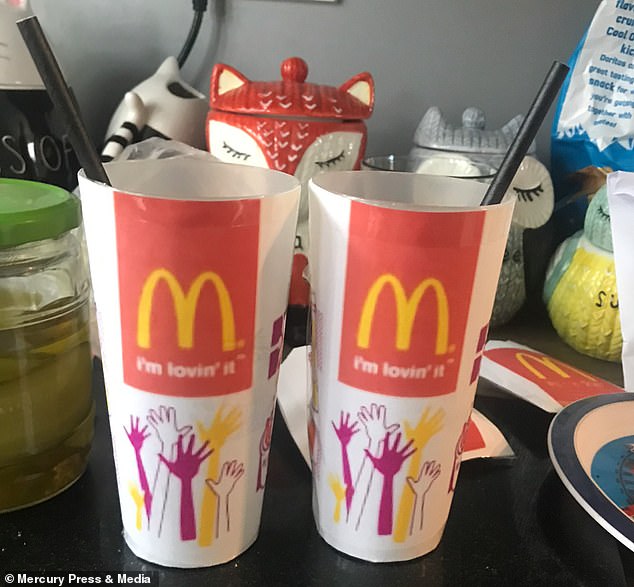 The crafty mother-of-two wrapped cups in McDonald’s logos to recreate the effect, pictured 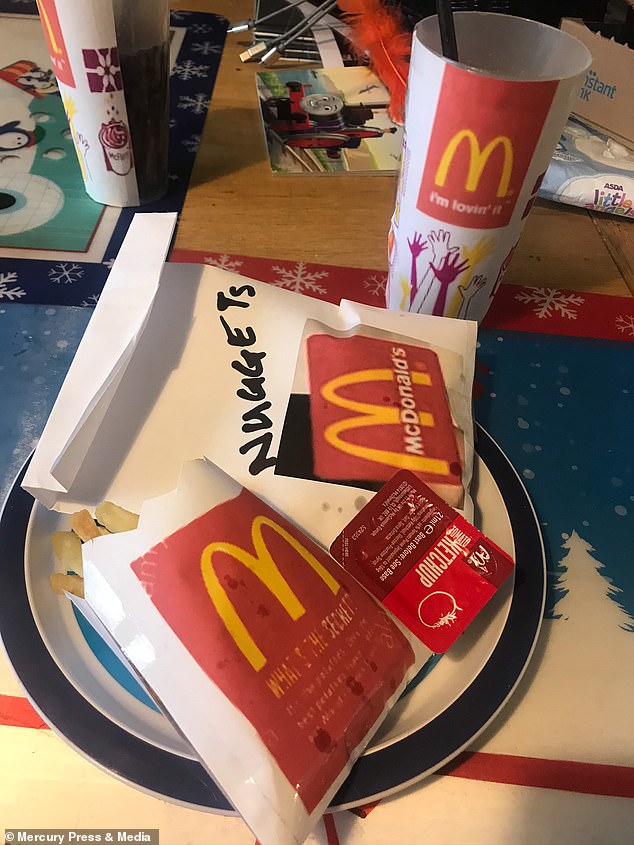 The chips were served in pieces of A4 paper printed with the McDonald’s branding, pictured 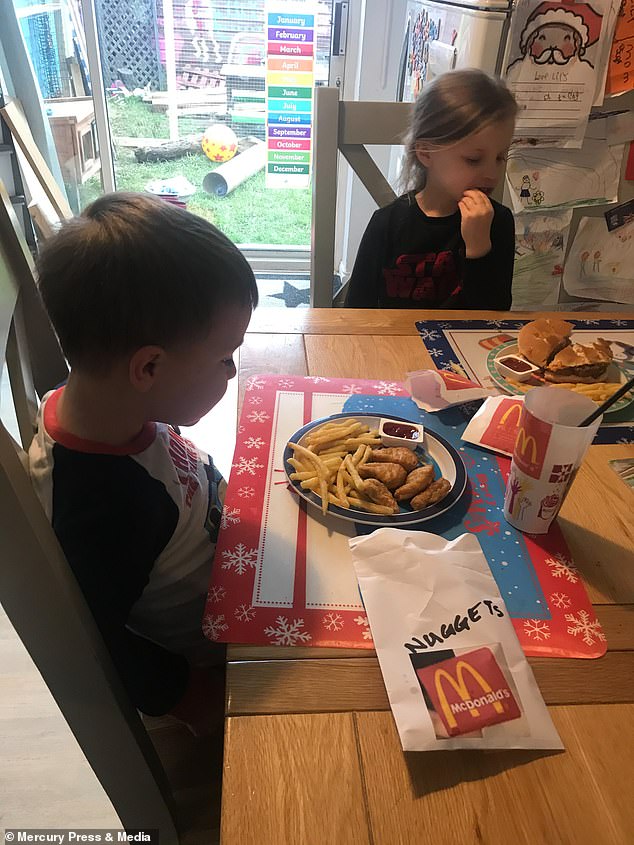 ‘Even though it’s easy to go to McDonald’s, the look on their faces was 20 times better then you’d get on a normal trip. I didn’t expect them to be so excited – it just goes to show it’s the little things that can make such big a difference.’

The meal cost Danielle just £2.15 to make because she already had Pepsi Max, chicken nuggets and salad at home. She picked up a pack of four reduced-price burgers for 65p at Asda and bread buns from the corner shop.

The DIY packaging took 45 minutes to make. Danielle explained she created the chip packets by sticking together pieces of A4 paper covered in the McDonald’s logo and wrapped large cups of Pepsi Max in a similar way.

The dedicated mother even went through the trouble of finding greaseproof paper for the cheeseburger and printed the burger logo directly onto two sheets. 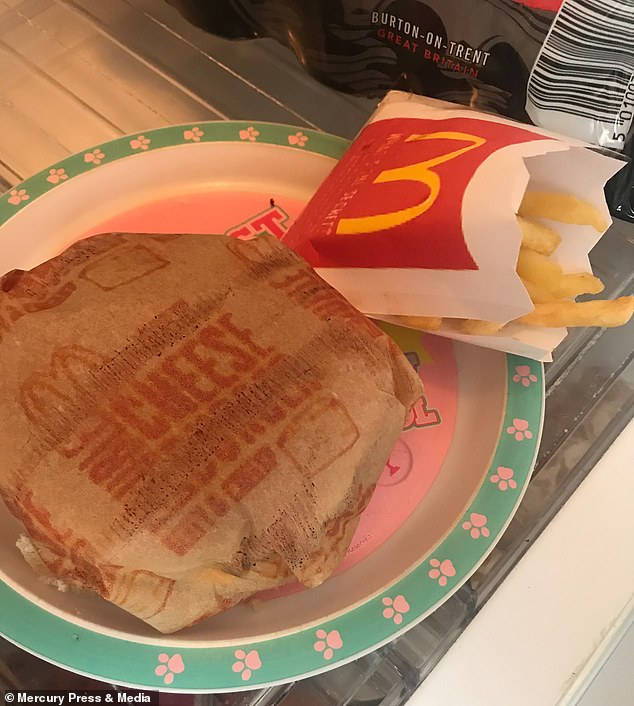 The Big Mac was given to the children in grease proof paper printed with McDonald’s, pictured 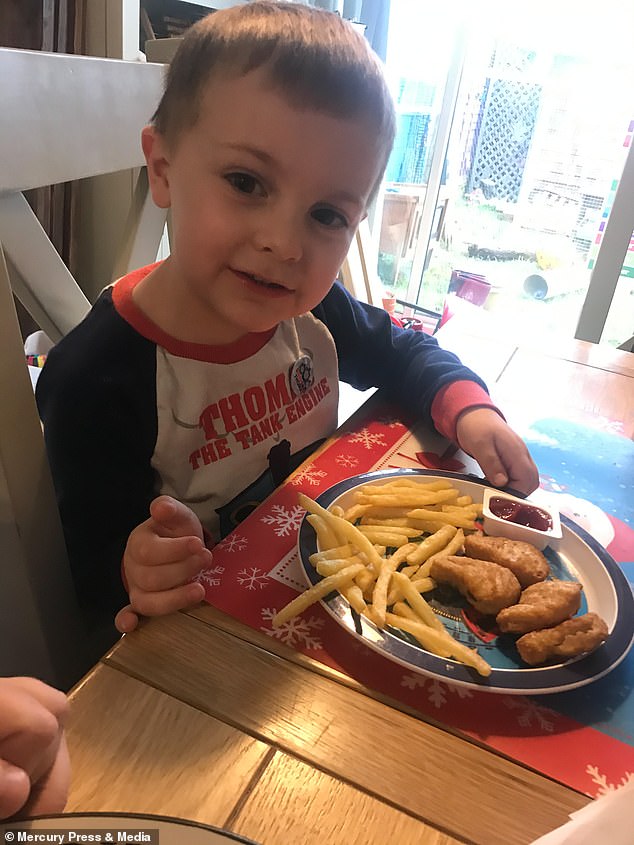 Danielle continued: ‘I really had to think how to do the cheeseburger packaging because I knew my daughter, who’s autistic, would tell me if it wasn’t up to scratch.

‘She said even though it wasn’t exactly the same but that it was a ‘mummy’s McDonald’s’ so she was happy. We used to go McDonald’s once a week as a regular treat when I was working full-time, but I became a single parent last year and I’ve not had the money to continue the ritual.

‘It was lovely to have a reminder of nice things we used to do and also to realise that we can still do them on a budget. We’ve been in lockdown for four weeks because Oscar had symptoms, and it has been tough not being able to do the normal nice things.

‘He’s fine now, but the McDonald’s was a way of having some fun during these times and reminding us of a sort of normality.

‘They loved it and have asked me if they can have a homemade KFC next time, so we’re having that next week and they’re going to help me prepare it.’

Danielle is not the only takeaway fan recreating her favourite dishes in lockdown. 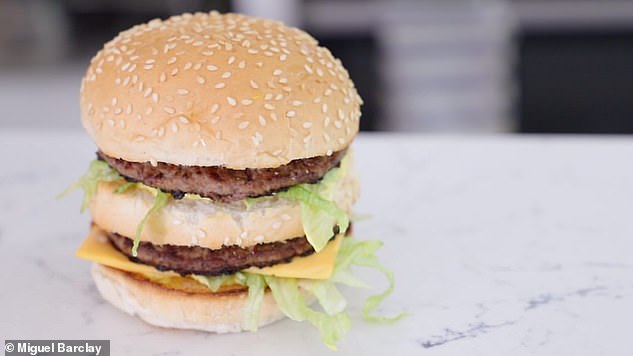 Hundreds of people commented on the post, with many saying they were going to make it at home, or asked their friends and family to make it too.

Instagram chef Miguel Barclay, from London, posted a video of his creation to Instagram on Saturday, showing an easy step-by-step guide to making the iconic burger.

In the video, Miguel starts by toasting three burger buns in a pan, and then setting them aside. Next, he puts two beef mince into a burger shape and fries them, without seasoning them.

How to make a Big Mac at home

Chop up white onions, lettuce and pickle into small pieces and place on top of each burger

Assemble the burger with bread and add slice of American cheese.

To make the famous Big Mac sauce, Miguel mixes mayonnaise, American mustard, and ketchup and a spot of tarragon.

He garnishes the burger with chopped white onion, lettuce, pickle and a slice of American cheese. Miguel finishes off by seasoning the burger and assembling it.

Writing on Instagram, where the video has racked up more than 65,000 views, Miguel said: ‘It’s just mince beef, nothing else (season it at the end). The sauce is made with a squeeze of mayo, American mustard, ketchup (I didn’t have any ketchup) and tarragon.

‘I know the real sauce recipe from McDonalds states that there is no tarragon, but it has chopped up pickles, and I’m sure those pickles are flavoured with a tarragon infused brine, and that is why it is my secret ingredient.

‘Trust me. This is as close as it gets to the original thing.’

Hundreds of people commented on the post, with many saying they were going to make it at home, or asked their friends and family to make it too. 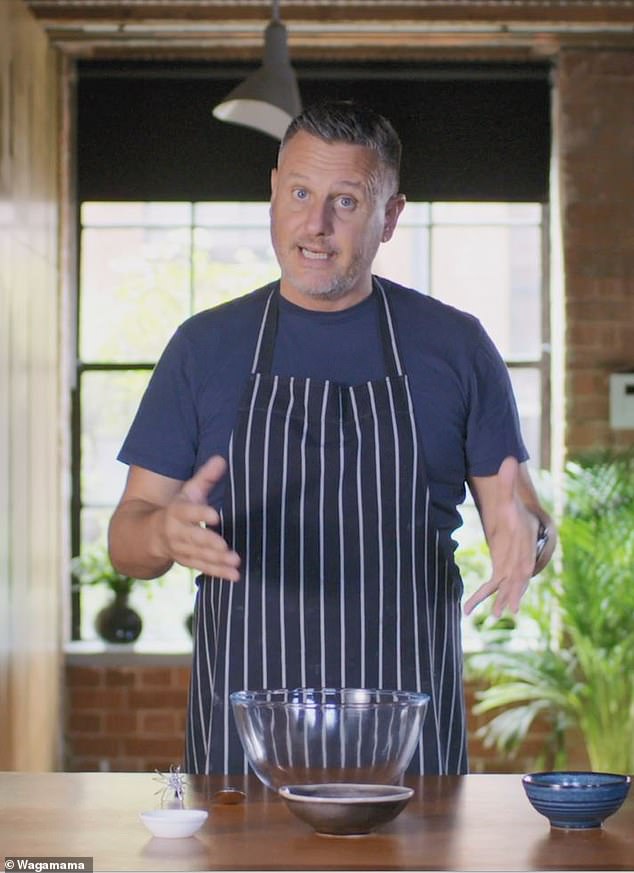 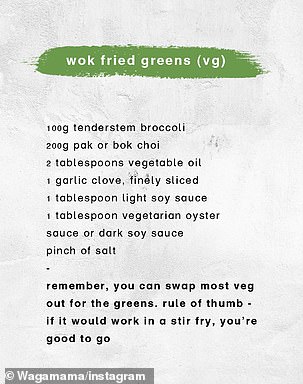 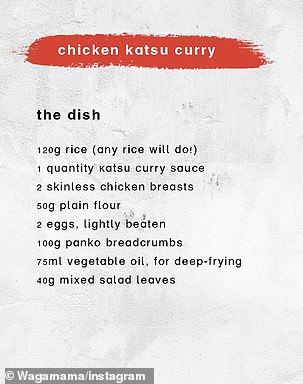 Wok fried greens will feature in week one (left), as will the much-loved dish chicken katsu curry (right)

Wagamama has announced a number of free online cooking classes that will be shared on social media every Wednesday night, starting today.

The free online Pan-Asian cooking classes, available on Facebook, Instagram and YouTube, will be presented by Wagamama executive Chef Steve Mangleshot, who will take fans through each step from his home.

He explained the streaming videos will be recorded on his iPhone, adding that he wanted to ‘create a sense of community’ through cooking.

The chain will post all the ingredients needed at the start of every week so wannabe chefs can make sure they are fully prepared. Steve has been the chef behind the Wagamama menu for the past 12 years and takes inspiration from Japan and wider Asia.

Dan Fell, from Warwickshire, revealed his version of the famed 11 herbs and spices mix to Twitter following the closure of the fast food chain amid the COVID-19 lockdown.

The music composer claims that after more than a year of experimenting with different recipes to replicate the popular takeaway, he’s now got it ‘spot on’.

Add the flour to the herbs and spices. Then use three parts flour to one part self-raising flour.

Season the chicken in a mix when at room temperature.

Egg wash your chicken using egg white and milk. Then re-season in the mix.

Fry the chicken for five to six minutes at 160C to 165C before placing it in a pre-heated 80C oven – then give it a final 90-second fry prior to serving.

McDonald’s shares its recipe for a Sausage & Egg McMuffin

To make a hash brown 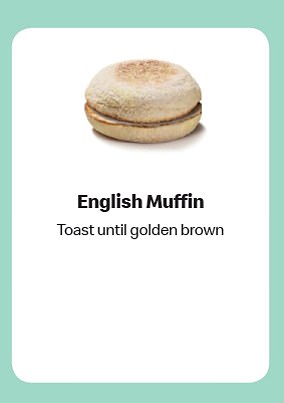 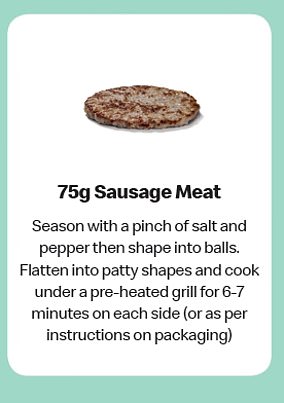 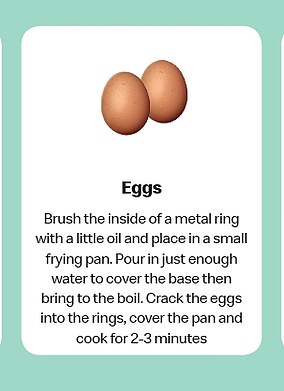 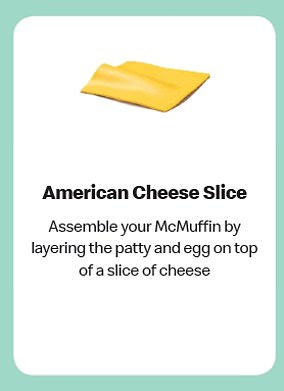 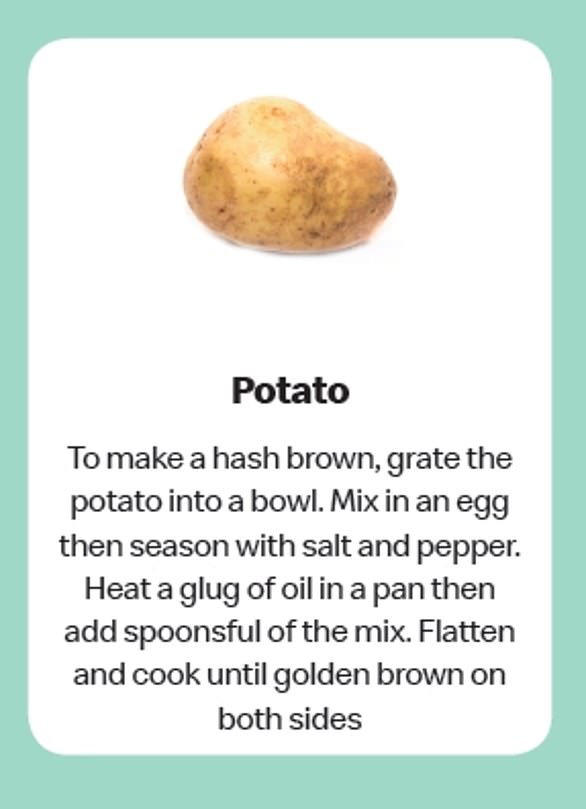 Tags: Barclay, How, Miguel, reveals, to
You may also like
Recent Posts