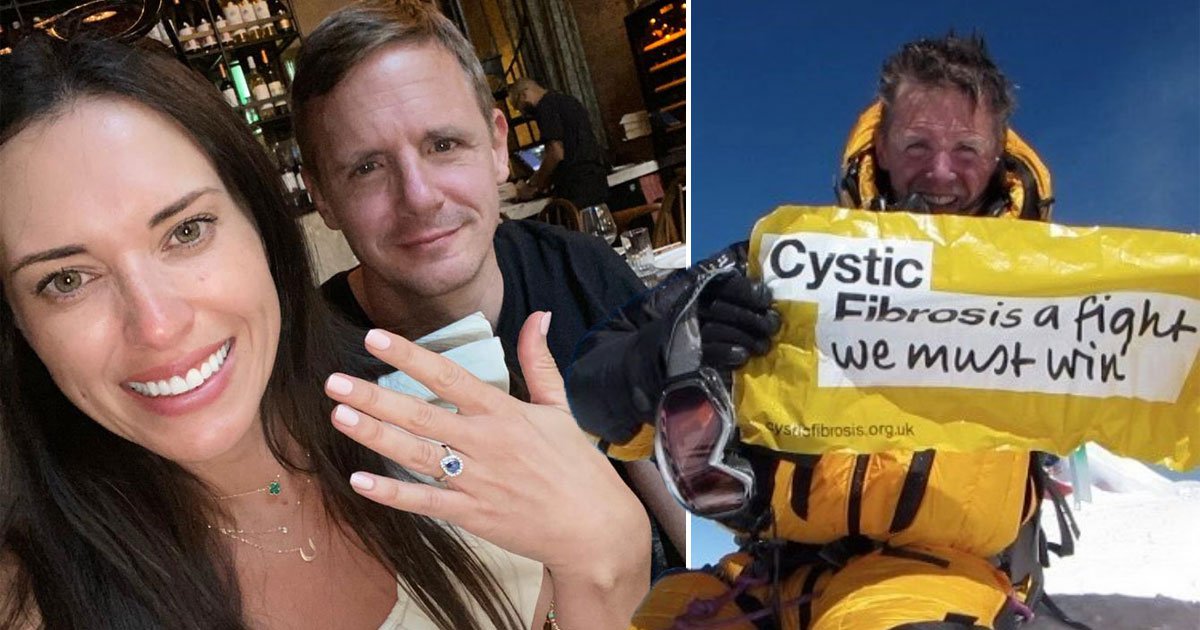 The first man with cystic fibrosis to climb Everest has used the snow he collected on the mountain’s peak in the most romantic way possible.

Nicholas Talbot, 46, from Durham, completed the expedition six years ago, and now he’s had the snow set behind a sapphire for his wife’s engagement ring.

Nicholas met his partner, Nour, 38, on Tinder in the spring of 2021. Knowing she was the one, he decided to propose – and had the perfect excuse to use the melted snow.

Nicholas said: ‘I’d always had it in my mind that should I get married, I might use it as part of an engagement ring.’

Of course, getting the snow was treacherous.

When climbing Everest, Nicholas faced an avalanche on his first attempt and an earthquake on his second, causing him to break his ribs and a climbing partner to tragically pass away.

When he finally reached the summit of Everest in May 2016, he wanted a memento of the great peak, so he decided to gather snow from the top and put it in a flask.

He said: ‘I’d also thought at some point that I might use it to create some forms of jewellery to sell to benefit one of the cystic fibrosis charities.’

But after meeting Nour, the romantic chap found a specialist jewellery company, Harriet Kelsall Bespoke Jewellery, to set the Everest snow – which was now water – behind a deep blue sapphire stone.

‘She knew that I was going to have a ring made, but she had no idea what was going into it or anything like that,’ Nicholas explained.

‘Nour had no idea I had it when I gave it to her.

‘I’d told some white lies as to when we would be getting it, and for her birthday celebration, I surprised her with it.

‘I hid it with her present. So, I got her diving cameras as a present, which I’d left in an Amazon box. And I hid this underneath it and wrapped it up. And then she unwrapped it in the restaurant – she was unpacking the camera, and then she found it.

‘When she got it, she was just so surprised by it. She just burst into tears, which wasn’t exactly the reaction I expected – it was good tears.’

In September this year, just a couple of weeks after the proposal, the couple married.

Explaining how he first got into mountaineering, Nicholas said: ‘Growing up in the middle of nowhere, where there’s nothing to do, over the years, I used to get dragged out by my parents and sisters to climb mountains, but I started to like it.’

One of the reason he climbs is to raise money for cystic fibrosis charities.

He said: ‘It felt amazing to be on top of the world, and I also felt a sense of relief because it was the third attempt.’

But he’s by no means done with climbing.

Reminiscing about the challenges, Nicholas said: ‘I suppose I’m less afraid of failure now and more willing to try things from a work and personal perspective because I’d prefer to live a life with no regrets.’