Home
Lifestyle
Madrid icon Casillas calls for ‘vintage Clasico when nightmare ends’ but which Real and Barca stars would make it? – The Sun

IKER CASILLAS has called for a "vintage Clasico" match to raise money for charity when the coronavirus pandemic is over.

But, with so many legends of the game ready to play for Real Madrid or Barcelona, how would the teams line up? 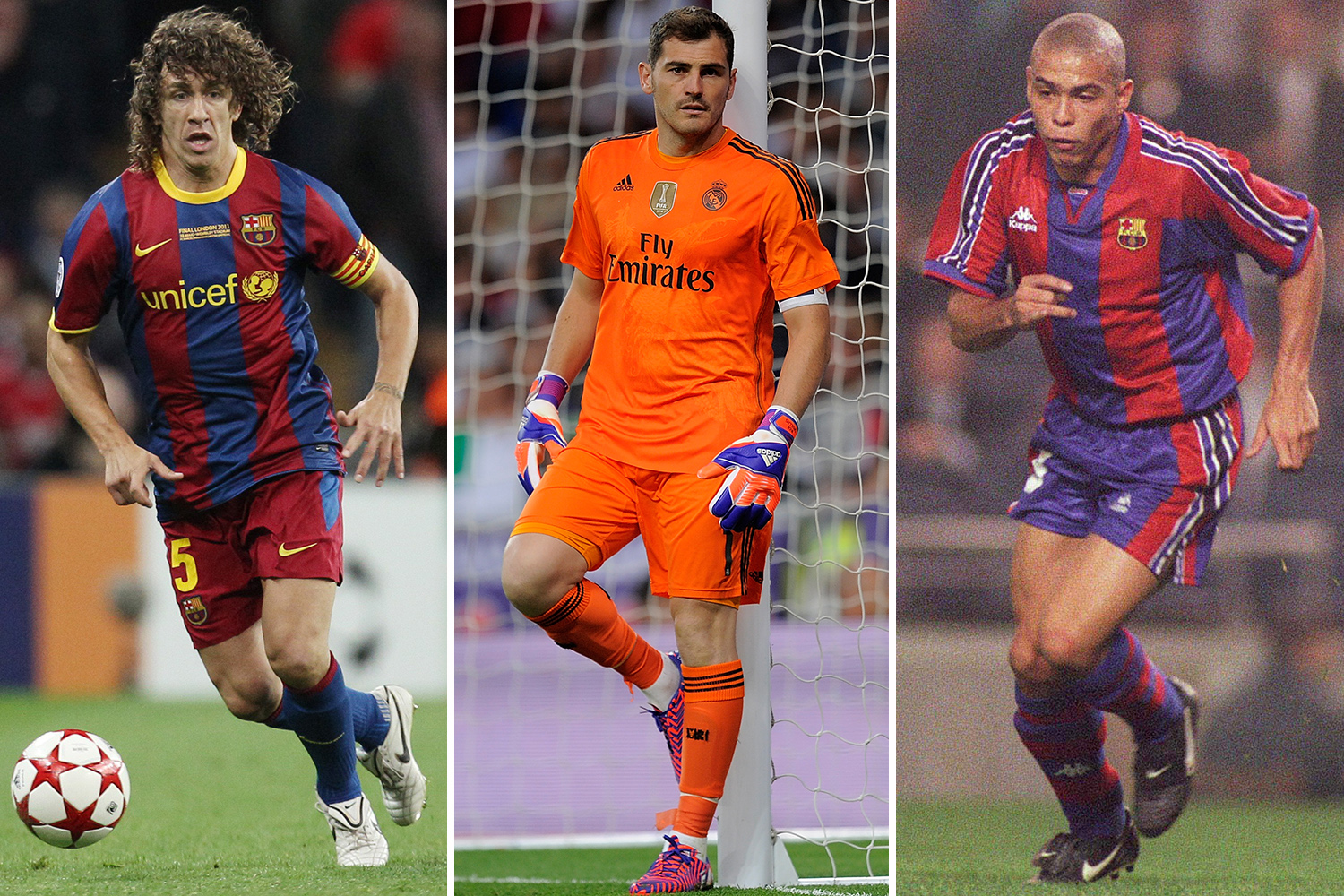 A ball hasn't been kicked in LaLiga since March 10 with Spain badly hit by the Covid-19 outbreak.

Seeking some much needed respite, Real icon Casillas tweeted: "There has been everything but… what the hell! When this nightmare ends, we should gather the legends of years ago and play a vintage Clasico!! Raising money for those who need it!"

The idea received a great reception, former Barcelona rival Andreas Iniesta replying: "Start making some calls… And count on me!!"

With that in mind, SunSport details the players no longer with the Spanish giants best suited to such an iconic encounter. 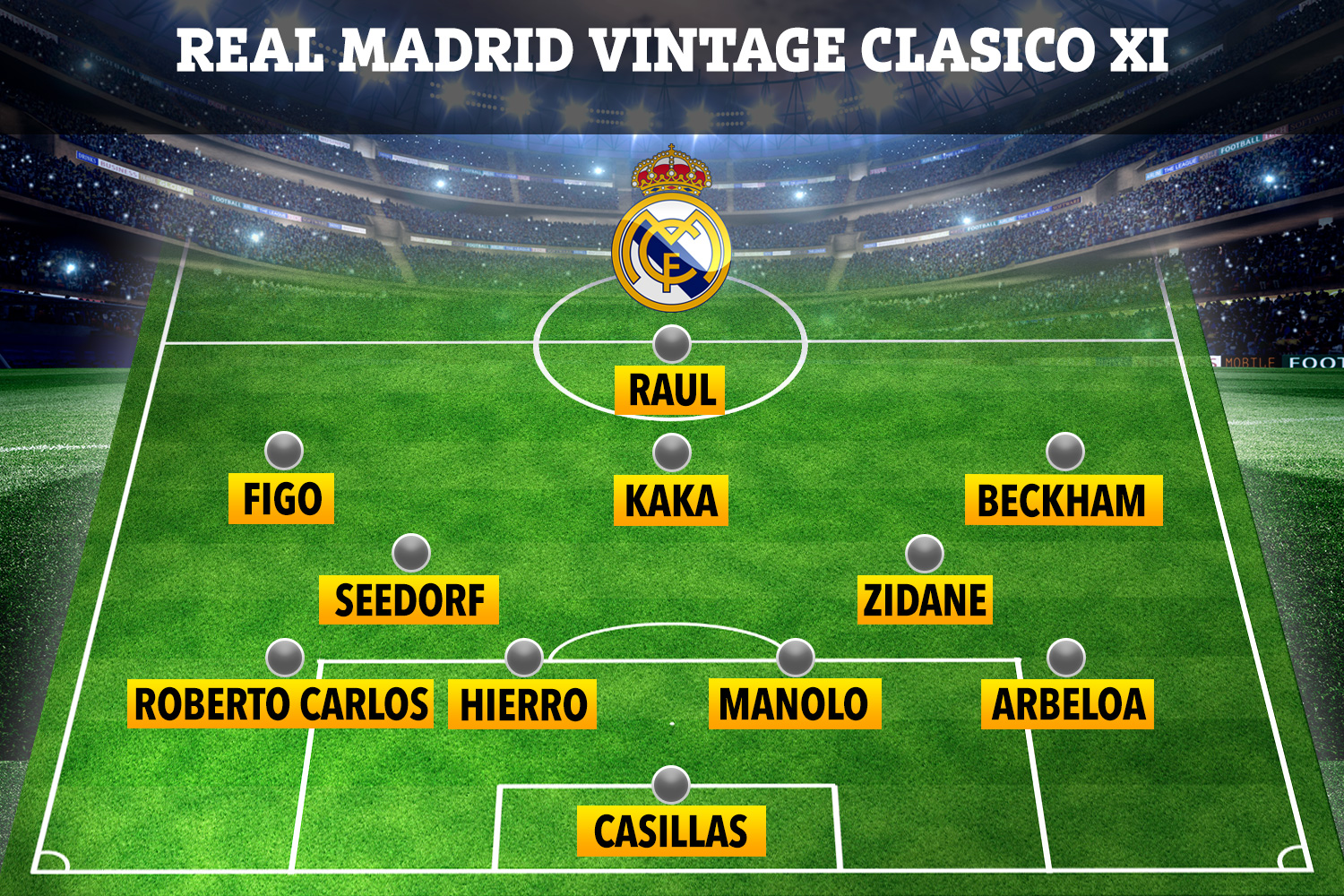 The vintage Clasico is the brainchild of the Spanish goalkeeping legend and he will have a tough time not picking himself for the clash.

As first-choice in every year he spent at the Bernabeu – bar an injury-hit 2012/13 that also saw Jose Mourinho controversially drop Casillas – the 38-year-old won three Champions League titles and five LaLigas with Los Blancos.

Fighting Michel Salgado for the right-back honours here is fan favourite Arbeloa, who remains a vocal Real supporter to this day.

Coming through the famed La Fabrica academy, the Spaniard has never been afraid of winding up Barcelona and once clipped Lionel Messi round the year during a 1-1 draw in 2013.

It is hard to think of a list of Real legends and not have Hierro come to mind.

Joining as a goalscoring midfielder in the late 1980s, he evolved into a defensive master and formed one of the club's greatest-ever centre-back partnerships for 1998's famous La Septima Champions League triumph – his first of three.

In selecting for this vintage Clasico, current stars are out of the question given their commitments when the season restarts – as are older legends unable to contribute so long after hanging up their boots.

And while Manolo retired almost 20 years ago, the sight of the 54-year-old back alongside Hierro to herald the return of Spanish football is too good to pass up. 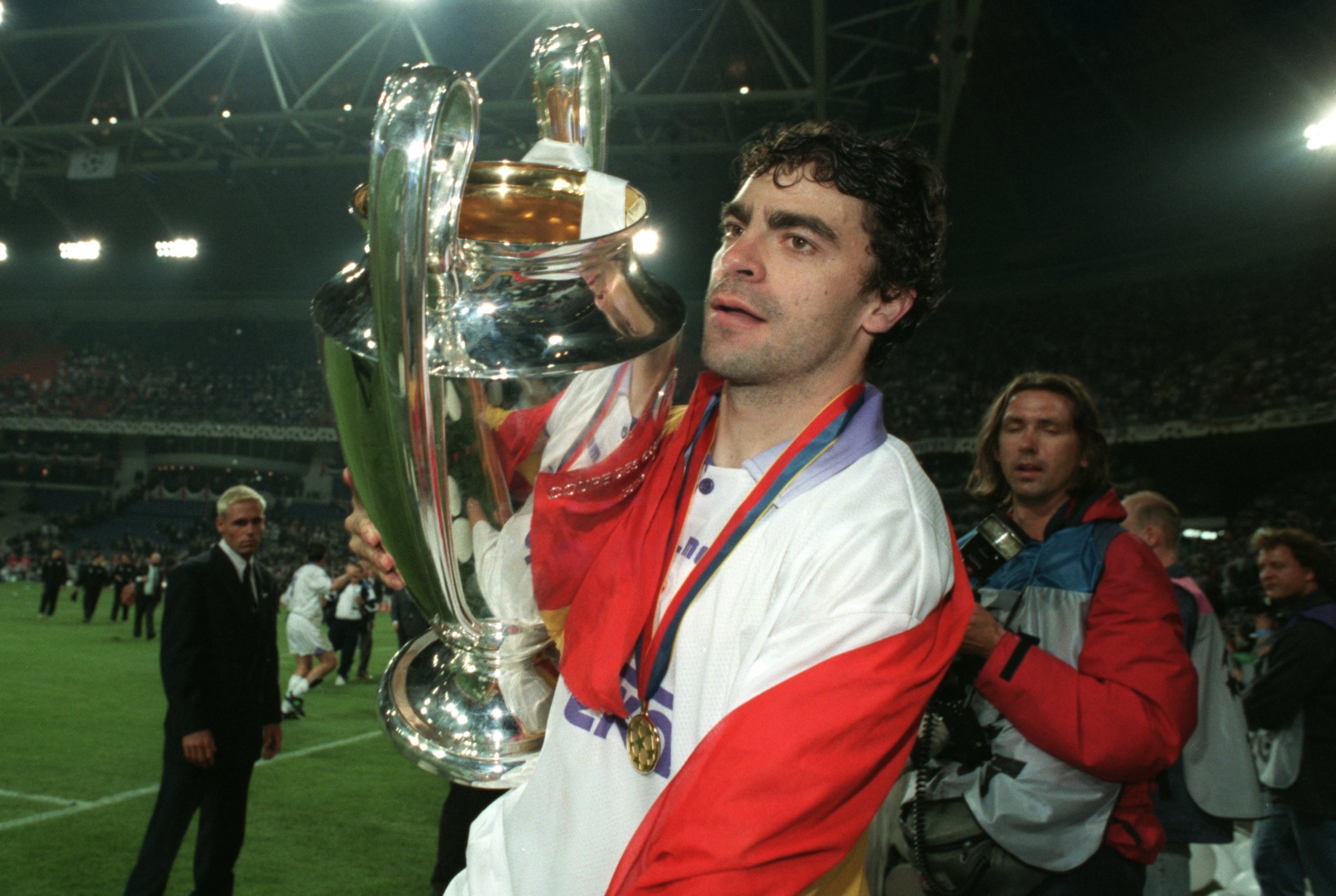 As our third pick from that famous 1998 cup winning side, that night in Amsterdam came in the early days of Roberto Carlos' career before he formed a big part of the Galacticos team that succeeded it.

Despite the Brazilian's aging legs, his dynamite left-foot remains a brilliant spectacle even in charity matches.

In three-and-a-half years at Real, Dutch powerhouse Seedorf was an ever-present force in the heart of a hugely talented midfield.

And, at 44, he will have plenty left in his tank to star in a Clasico legends encounter as one of those rare talents who appeared to continually develop his game as he aged.

Remembered best for that goal against Bayer Leverkusen, Zidane was arguably the most successful of all the Galactico signings.

Five years brought only one LaLiga and one Champions League as Real's big-money men struggled to consistently win on the pitch, but nevertheless Zizou easily won the hearts and minds of fans everywhere.

The 44-year-old's famous move to Spain from Manchester United in 2003 only reaped a single league title but watching him debate with Roberto Carlos over set-piece duties would bring back great memories.

And with it highly unrealistic to try and drag Cristiano Ronaldo back from his Juventus duties for this exhibition game, Goldenballs remains as a big a draw as any. 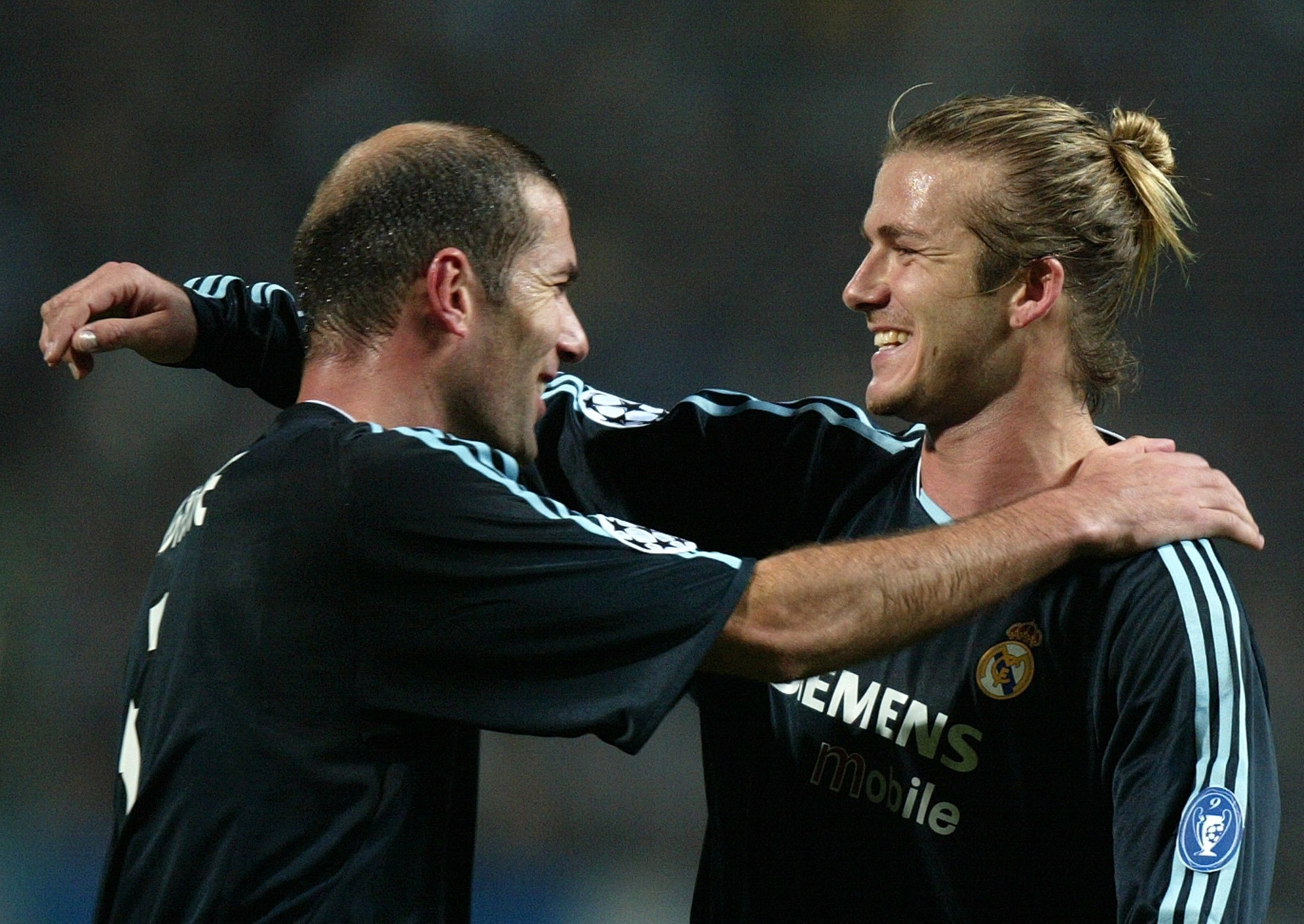 It is fair to say Kaka's spell in Madrid did not go to plan after landing as the second-most expensive player of all-time in 2009 – so this opportunity could become his crowning glory in a Blancos jersey.

Indeed, the Brazilian still has the ability to dazzle at the age of 37, as he showed when taking to the humble pitches of a Hackney earlier this year.

Adding some, or bucketloads, of spice to a vintage Clasico would be former Barcelona winger Figo pulling on his old Real shirt.

The winger's ridiculously controversial move between the sides in 2000 could even be cast aside to produce a stirring moment of forgiveness from Blaugrana fans in the tough circumstances… or send them into furious rage. Heartwarming either way, perhaps.

Who better to lead the line for a Madrid legends team than Raul?

Los Blancos' first-choice striker for over a decade-and-a-half, the Spaniard famously silenced the Camp Nou by celebrating his last-minute equaliser in front of the home end to cap a memorable 2-2 draw in 1999. 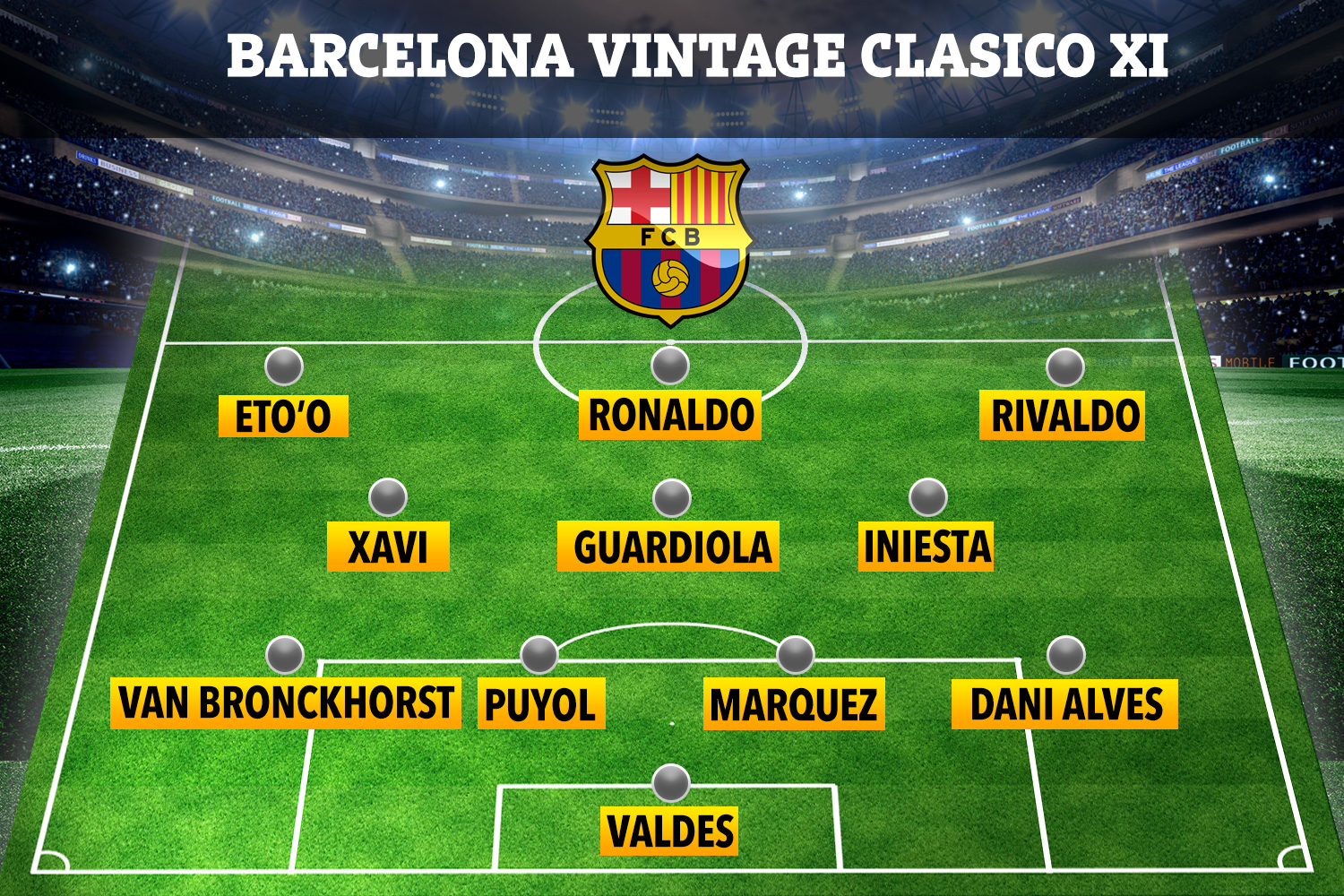 A number of Barcelona players became part of the furniture throughout the club's stunning rise after the turn of the century.

In between the sticks until 2014 was Valdes, accruing a sturdy six league titles as well as two Copas del Rey and three Champions League triumphs.

With a monstrous 43 trophies bagged in his career, ex-Barcelona star Alves is a shoe-in for the right-back spot in a vintage Clasico.

If he wants it, of course, with the 36-year-old signed to Sao Paulo in Brazil where the pandemic situation could be very different once Europe starts to return to normal.

Named club captain in 2004, Puyol wore the armband for a decade as Barcelona became the world's dominant footballing force – and is a great shout for that honour in this game.

When just a young pup in the Catalans' team, it was Puyol charged with man marking fan nemesis Figo upon his first return to the Camp Nou, a game the hosts won 2-0.

Perhaps not a well-known name on these shores, Marquez is a verified cult hero in Barcelona for his exploits on the Mediterranean coast.

The best moment of the popular Mexican's seven years came when starring in the treble-winning 2008/09 campaign, before he left as the non-European player with the most appearances in the club's history.

Barcelona have a history of left-backs making an indelible mark on the position, from Ronald Koeman to Eric Abidal and Jordi Alba.

Best suited to a vintage Clasico encounter is van Bronckhorst, who spent four productive years with the Blaugrana – winning two league titles and a Champions League.

Only Lionel Messi has appeared in more Clasico clashes than Xavi, the Argentine beating his 42 outings against Los Blancos last month.

Arguably Xavi's greatest feat in the derby was a superb goal to open the 5-0 rout of 2010, perfectly judging a cross that deflected behind him before managing to produce a delightful chip past a helpless Casillas.

Dragging 35-year-old Iniesta over from Japanese club Vissel Kobe for a vintage Clasico shouldn't prove too tough – given he has already demanded a call-up.

As the most-decorated Spanish footballer of all-time, Iniesta can attempt to recreate his stunning rocket in the 4-0 Bernabeu win from 2015 if the clubs meet again. 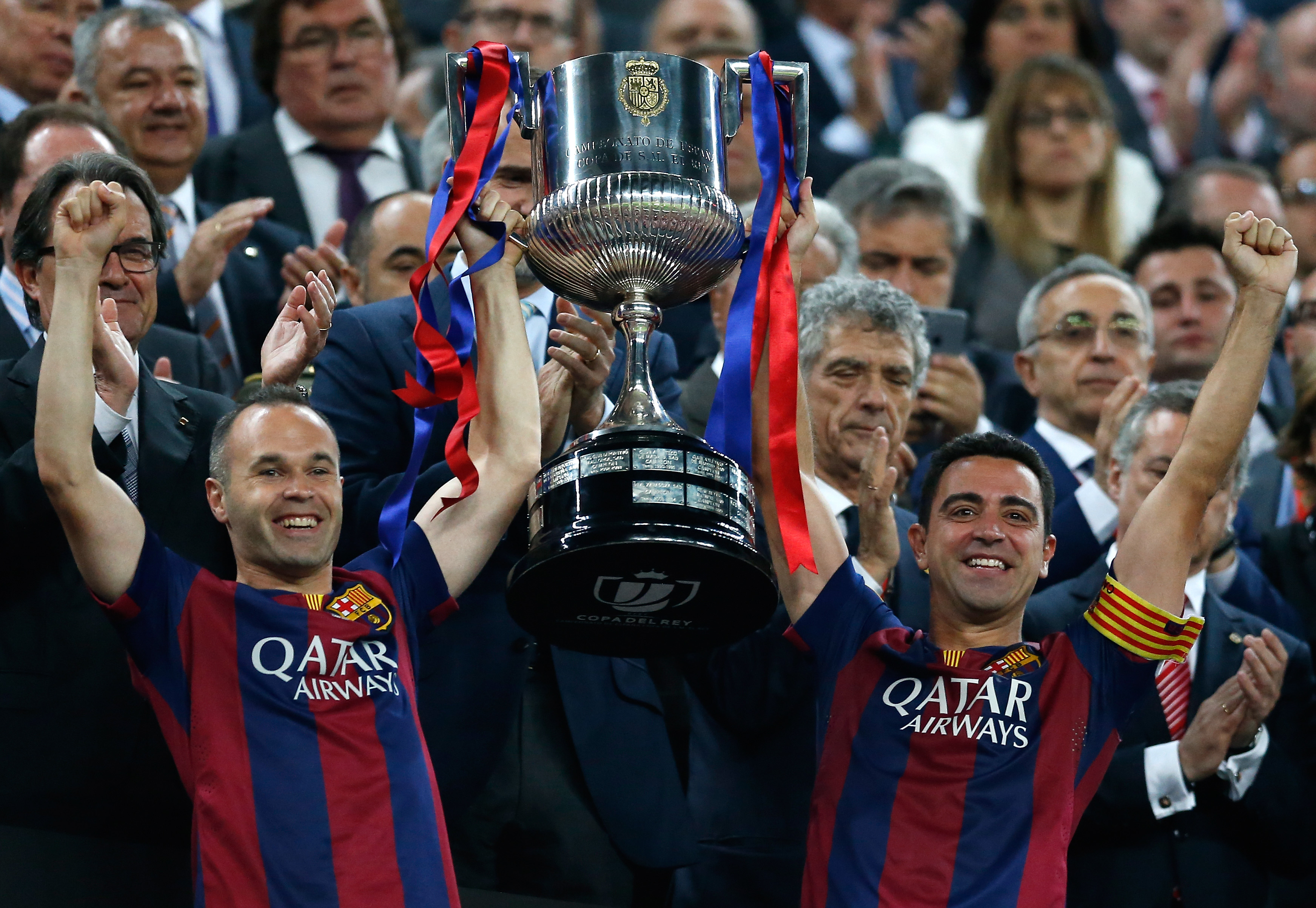 Manchester City manager Guardiola's impact on the Clasico stems as much from his time in the Camp Nou dugout as it does from the pitch.

But seeing the Catalonia native be received by fans for a charity game once the pandemic is over would leave no dry eyes in the house, after he lost his mother to coronavirus on Monday.

With Ronaldinho currently in a Paraguayan jail, the hopes of uniting the Brazilian with old star colleagues Ronaldo and Rivaldo are seemingly gone – but we can still have two of them.

Rivaldo, 47, is no stranger to appearing in legends games and his impressive record of seven goals in 18 Clasico games can see him become a thorn in Real's side once again.

You must feel sorry for the likes of Samuel Eto'o who, along with Thierry Henry, Patrick Kluivert and more, will struggle to make these legends XIs when Messi retires.

With the Argentine attacker still needed for the first-team, his former partner in crime is ideal to join up with this one-off setup.

If Real Madrid get Figo then Barcelona can make a claim to bringing goalscoring master Ronaldo Nazario into their side for the vintage Clasico.

One fun thing to do if the game takes place is have the Brazilian play one half for Barcelona before hopping over to Real Madrid for the second-half, if his legs can take it…

Tags: calls, Casillas, for, icon, Madrid
You may also like
Recent Posts