It’s said that in New York a man has the freedom to find himself, or lose himself, to invent himself, even to rewrite his history.

Bronco Matt Lodge certainly reshaped his future after a drunken rampage in the Big Apple more than four years ago.

Former Essendon captain Jobe Watson found refuge there, effectively losing himself during his 12-month ban by the World Anti-Doping Agency for using supplements.

But the “City That Never Sleeps” has been savagely affected by the coronavirus epidemic and, given the drastic cut in the salaries of NRL and AFL players, together with the possibility they might be playing football in Australia in December, they are unlikely to be headed there this coming brief off-season.

They certainly won’t be visiting their favourite watering hole, The Australian bar on New York’s west side.

This was the bar where former Storm party boys Brett Finch and Will Chambers made their home to escape Hurricane Sandy in 2012. Well, that’s their excuse.

It closed early last month, as a result of a fortuitous sale by the owner, Matt Astill, a former Manly lower-grader. 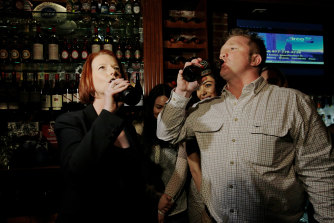 Former prime minister Julia Gillard popped into The Australian on her last night of a US tour in 2011 to have a drink with Matt Astill.Credit:Andrew Meares

Twelve years after opening the bar, Astill began negotiations late last year with the new owners, who plan to turn it into an Irish bar. They signed the paperwork early in March.

A head down, bum up Manly lower-grader, Astill rejects the notion of an eagle-eyed vision that led to the opportunistic sale, expressing deep sympathy for fellow proprietors facing tough times during the COVID-19 pandemic.

He has personally watched more than 35 former rugby league internationals, 30 ex-Origin players and a plethora of AFL stars pass through the doors of The Australian.

But it’s the regulars who are foremost in his thoughts. He hopes the NRL and AFL seasons recommence and the new owners show the telecasts.

One regular is the New York Transit Authority (subway) boss, Andy Byford. An Englishman who also spent time in Sydney in the 1980s as CEO of Rail Corp, he became a South Sydney supporter. “Andy came into the bar to watch the 2019 England/All Blacks Rugby World Cup semi-final proudly dressed in a 1980s South Sydney ‘Minties wrapper’ jersey,” Astill says.

One of his earliest regulars was an Australian banker, Wayne Froud, who had been in New York for 30 years or so. Wayne was a dedicated St George fan growing up but had lost touch with the game while in the US. On his regular visits to the bar, Astill would re-educate him about the game and each week Froud would pop in for both live St George games and replays. Froud sat proudly at the bar in October 2010 watching his beloved Dragons beat the Roosters in the grand final.

It was the bar where prime ministers watched big football games in the early hours; Rupert Murdoch called by; Australians celebrated being drafted to the NBA; and ex-pat Indians and Pakistanis crowded together to watch a World Cup cricket final. Its biggest night was a fundraiser for those who lost their homes in the 2009 Victorian bushfires. 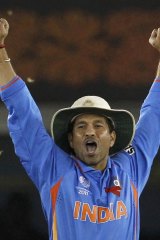 “Our phone did not stop ringing for days in the lead up to the match,” Astill says. “We booked out in minutes. I put all the Pakistanis upstairs and Indians downstairs. It became so confusing with all the names that I started giving them Anglo names. I would just say ‘OK, you are John Smith’ and in an Indian accent they would say ‘OK, OK, I am John Smith!’

“Every Indian and Pakistani knew we were the only place showing it. I was shitting myself as I thought there would be a race riot on 38th Street and the cops wouldn’t understand the gravity … 'Yeah, yeah, riot over cricket'.

“Anyway, everyone behaved and actually there were cheers all round when they showed the two countries' PMs sitting next to each.”

Astill, who was coached at Manly in the 1990s by Melbourne Storm’s Frank Ponissi, linked up with his former coach in December. They selected three grades of teams from visiting players, a challenging prospect considering three of the greatest halfbacks ever – Andrew Johns, Johnathan Thurston and Cooper Cronk – all had a drink at The Australian.

However, selection was also based on bar consumption, which explains why nine-time grand final coach Craig Bellamy is the head coach and I am reserve grade coach.

Ponissi said of his sober boss, “Craig has called by the bar in each of his six US visits to study American sports teams and many a Storm strategy plan has been hatched there.” 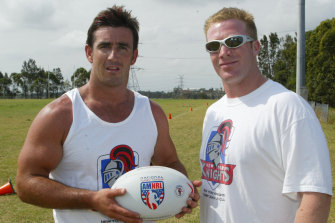 Astill said his bar became their choice during the live viewing of game one of the 2009 State of Origin series.

A couple dressed in retro Brisbane Broncos jerseys approached him enquiring whether their son, if selected, could have his draft party there. The player was Patty Mills. Two nights after being chosen by the Portland Trailblazers, Mills celebrated and donated a shirt, which hung in the bar alongside other jerseys worn by Australians.

In 2014, Dante Exum followed Mills with celebrations, as did Ben Simmons in 2016.

NBA superstar Shaquille O’Neal was a surprise guest for dinner one night. Astill described it as “the greatest eating performance by one person by far in 12 years. Dallas Donnelly, Artie Beetson and David ‘the Mule’ Hosking wouldn’t have got anywhere near him.”

Escorted downstairs through the kitchen to avoid the big crowds, O’Neal stopped by the gent's toilet whose location was signalled by a large action shot of cricketer Ian Chappell. (The door to the women’s toilet had a photo of Jean Shrimpton from the 1965 VRC Derby Day).

Astill says of O’Neal’s lavatory stop, “He busted the dunny … literally” A plumber was urgently called.

The nearby keg room became the brief hiding place of an armed thief who robbed a local jewellery store and was pursued by police. “The cops won," Astill says. "The patrons enjoyed the entertainment.”

The bar has seen many fall asleep, including regular visitor actor Michael Caton (AKA Darryl Kerrigan from The Castle). An avid Broncos supporter, Caton watched his team in the early hours and took a snooze. Astill took a cheeky photo labelled: “Tell him, he’s dreaming”.

Of all the mementos that hung in the bar, including the old Reschs' beer posters (admired by Singo on a visit), Astill takes pride in a letter from former prime minister Julia Gillard who thanked him for the 2009 Black Saturday fundraiser. He concedes it takes some reconciling with a letter his US-born son received from Trump.

Astill, who travelled to NYC on a personal voyage of discovery, played for the New York Knights; represented the USA against Australia and seized the opportunity of opening The Australian after working as a barman on the Upper East side. Ponissi says of his former charge: “Everyone loved playing with him at Manly and everyone loved working for him at the bar. His work ethic and friendly demeanour could be a template for every NRL player.”

By coincidence, on the very day the bar was transferred to its new owners, it was announced a New York-based team had lodged a bid to play in a professional tier of England’s RFL.

While Astill waits for rugby league to start at his old home and his new one, he is home-schooling his two kids, while his wife, a doctor, works in emergency hospitals.

In many ways, NYC resembles his favourite code. “It is a very resilient place; morale wise and economy wise,” he says.

Tags: be, close, Doors, Last, on, orders:
You may also like
Recent Posts