Home
Lifestyle
‘Kosciuszko is in trouble’: call for federal intervention on feral horses

NSW is yet to stem the tide of rising damage from feral horses in the Australian Alps, sparking calls for the federal government to intervene and use its powers to impose Commonwealth protections for nationally significant environmental assets.

Sunday marks the third anniversary of NSW passing a law that vetoed the culling of feral horses in the Kosciuszko National Park, where the population has swelled from 1500 to 14,000 (at the last end of 2020) in the past 20 years. 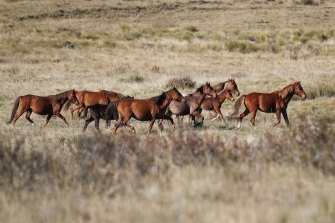 Herds of hard-hoofed horses are destroying the fragile rare alpine environment, which is national heritage listed and protected by state and federal law. Sphagnum moss wetlands that form at the headwaters of the Murray and Murrumbidgee Rivers are being trampled, rare habitats damaged and endangered animals are being out competed in their native habitat.

Since the culling veto was brought in park managers have focused on trapping and rehoming feral horses with private owners. Most of the released horses were mares and foals which will return to breed with the wild herds. Culling is still undertaken in Victoria and the ACT.

Of the 918 feral horses trapped in NSW between July 2020 and April this year, 315 have been released back into Kosciuszko and 603 have been rehomed.

Significantly, mostly mares and foals were released from traps because they are harder to transport safely, which means they will continue breeding in the wild.

“Under, the current trapping program it would take 50 years to remove 11,000 horses at the average trapping rate, and 17 years at the 2012 removal rate – the highest ever. Every year the population grows by about 18 per cent,” Mr Cox said.

“The park is in trouble and it’s increasingly clear that only federal intervention will save Kosciuszko.”

A spokesperson for Federal Environment Minister Sussan Ley said: “The minister has highlighted the damage being caused to fragile ecosystems in the Australian Alps. The minister will continue to pursue this matter with the NSW government, and we would not rule out any action from the federal government.”

Ms Ley said in December feral horse numbers were “far too high and the damage to the landscape is too great and we have to do something about that damage”.

NSW Environment Minister Matt Kean has been contacted for comment.

The Kosciuszko Wild Horse Heritage Act was introduced into the NSW Parliament by Deputy Premier John Barilaro and passed by both houses of Parliament on June 6, 2018.

Mr Barilaro told NSW Parliament in February that NSW should set a target to reduce horse numbers by 11,000, in the near term, and said achieving a population of 3000 would be “significant”.

As required by the act a management plan is being designed to “safeguard the environmental values of the park, while also protecting the heritage values of the wild horses”. It is set to be released for public consultation in coming weeks.

Experts say it would be impossible to reduce feral horse numbers by 11,000 without culling, because trapping is labour intensive and slow.

Tags: ‘Kosciuszko, Ca, in, is, Trouble’
You may also like
Recent Posts