This pad has it all: 18th-century doors salvaged from one of Kris Jenner’s storage units, a glowing James Terrell wall sculpture that looks like a pink egg, a gold tub fit for royalty and the usual bedrooms turned into glam rooms that all celebrities seem to have.

While the glowing neon numbers and message might not seem like much to the unsuspecting eye, the piece’s title ― “Very Happy Girl” ― helps explain the numbers.

The supermodel explained the meaning behind the piece in a video tour recorded for AD. 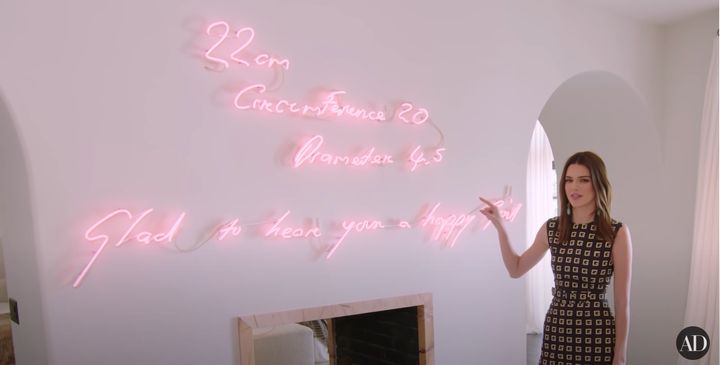 “I’m pretty sure the measurements are an ex-boyfriend of Tracey Emin’s penis size and then the message at the bottom is to his new girlfriend, ‘Glad to hear you’re a happy girl,’” the 24-year-old explains in the video. “Because he has a really big penis, I believe.”

The art has some Jenner-ous proportions, hung so people can see it right when they walk in the master bedroom.

The New York Times discussed Emin’s work in a 1999 review, explaining that the work in question listed the circumference and dimensions of Emin’s boyfriend’s penis at the time. However, the Times said Emin’s more “visually convincing artwork” was a piece titled “Psycho Slut.”

Jenner previously showed off the NSFW art in a 2017 episode of “Keeping Up With the Kardashians” that showed her explaining it to sister Kim Kardashian.

Kylie Jenner also owns two Emin pieces, one called “The Kiss Was Beautiful” and another called “I Can’t Believe How Much You Love Me.”