Jereme Clingan started prepping for the global pandemic three years ago without even knowing it.

The owner of Collingwood music store Clingan Guitar Tone had stumbled across a vending machine selling guitar strings, picks, tuners and drumsticks in another city famous for live music: Memphis. 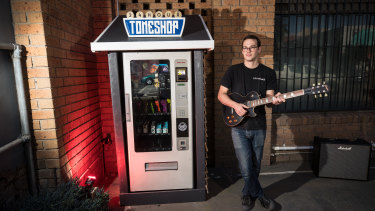 Clingan Guitar Tone is surrounded by music venues and rehearsal spaces and Clingan figured a 24/7 machine could be a godsend for musicians who needed an emergency guitar string or capo (a small device that clamps onto the neck of a guitar and changes the pitch): “It’s what musicians always lose before gigs,” he says.

The coin operated vending machine was a moderate success, prompting radio station Nova 100 to posit: “Is this the weirdest vending machine in Melbourne?” Then a torrential rainstorm fried the electronics in 2018.

So when COVID-19 closed his store and enforced isolation – and the death of American folk singer John Prine – inspired a nation of lounge-room musicians to dust off their guitars, Mr Clingan was not about to fret.

Two weeks ago he launched the 24 Hour Toneshop 2.0 vending machine. This one is a better machine, has more stock and takes notes up to $50. “Lots of people are using it – it’s pretty exciting,” Clingan says.

Serendipitously, Clingan says a lot of guitar teachers have been transitioning to online lessons over the past year. “Things are just falling into place.”

His message is: “Keep calm and play on. Music and guitar will always get you through.”

The “coronavirus pivot” has become one of the buzz words of 2020.

As cities across the world go into lockdown, businesses such as Clingan Guitar Tone are changing with the times and coming up with innovative ideas to reconfigure their operations.

If you told Martha Tsimas a month ago that she would be overseeing the distribution of hundreds of thousands of surgical masks and packs of hand sanitiser, she would have given you a peculiar look.

Tsimas is the owner of storied Chapel Street nightclubs Inflation and Chasers; fixtures of Melbourne’s clubbing scene for decades.

She scoffed when her doctor predicted that Melbourne would go into lockdown: “No way I believed my businesses would be shut.” 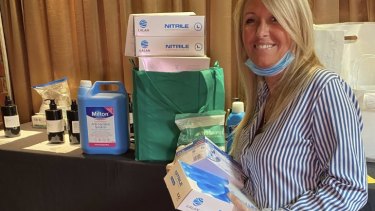 When Inflation and Chasers were forced to close on March 13, Tsimas’ first thought was to bunker down and ensure her and her staff’s elderly parents had the supplies they needed to stay safe.

She was able to access hand sanitiser, toilet paper and anti-bacterial wipes from the company that normally supplied her nightclubs. She scoured Bunnings for masks.

Tsimas says: “Everyone kept asking: ‘Where did you get these products from?’.”

Chasers already had an online alcohol delivery platform. But Tsimas decided the demand for keeping people safe was greater.

She says her staff, who came from marketing backgrounds, were keen to keep working.

And so Chasers Wine and Supply Co pivoted to selling personal protective equipment.

The day before Good Friday, Tsimas took a delivery of 60,000 surgical masks, with an order of more than 1 million due next week. “It’s crazy,” she says.

She has fielded calls from pharmacies, hospitals, industrial cleaning companies, a car washing company and even a law firm that wanted bottles of hand sanitiser with its own logo.

Tsimas says her former life as a nightclub owner feels like a dream. “It was only a month ago but I think ‘Did that really happen?’.”

“Our iconic precinct and businesses have been devastated but even with the adversity they have been up to the challenge to survive and have quickly pivoted their businesses in creative ways,” she says.

OneSixOne, a late-opening club in Prahran with a rooftop bar and '70s-lit dance floor, promised it would keep the music going.

On Saturday night it will be doing just that (venue: your loungeroom), with DJs Agent86, Greg Sara, Jennifer Totty and Zok Le Rok livestreaming on Facebook.

“It’s taken the DJs two weeks to stop freaking out about DJing to no one,” says sound engineer Wil Burston, who will be producing the broadcast.

“It’s very weird coming from an industry where you feed off crowds. To suddenly have no one there is an absolute 180 to what we are used to.”

Nonetheless, any kind of work is a godsend for an entire industry on its knees. “I’m very glad I have some kind of event to focus on rather than the TV.”

Burston is hopeful sound engineers and DJs will be eligible for the government’s JobKeeper scheme, although he expects the paperwork would be complicated. 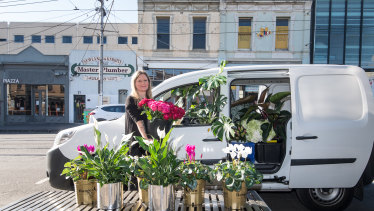 In some ways it’s been a tough time. A large part of her business is supplying flowers for weddings and events (now cancelled) and to offices and restaurants (now closed).

But two of her products have enjoyed an unexpected renaissance: the old-fashioned greeting card and house plants. "People working from home want to green it up," she says.

Instead of opting for a complimentary gift card to go with their flowers, Gilliam’s customers now want cards filled with long, heartfelt messages.

“I am running out of greeting cards – I would say I am selling at least double the amount I would normally,” she says.

Newly minted grandparents are being deprived of seeing newborns, lovers are being separated when one – or both – are healthcare workers.

The need for physical human contact – something some psychologists term “skin hunger” – is heightened after weeks of isolation.

Ms Gilliam says the messages reflect this. “People are saying, ‘I really want to give you a hug’.”

She says flowers have always been a way of connecting people and bolstering mental health: “Right now everything is heightened.”

When Paul Baggio and the team at Melbourne distillery Gypsy Hub started receiving phone calls from the likes of the Australian army, ICU hospital units and pharmaceutical laboratories, they began to wonder if they were in a war movie.

General manager Baggio operates craft distilleries in Collingwood and Preston that make spirits including The Craft & Co range of gins and rum.

Just as DuPont pivoted from making nylon stockings to parachutes and tire cords for the war effort in the early 1940s, he says that following the outbreak of COVID-19 Gypsy Hub began to supply an Ascot Vale pharmacy with pure alcohol so it could make its own hand sanitiser. (Hand sanitisers must contain at least 60 per cent alcohol to be effective in killing the virus.)

Gypsy Hub had a second still, which was quickly installed and is now running along side the Collingwood still, each operating around the clock.

“Then we got a call from the army to say can you spare some alcohol because we need it to do our job,” Baggio says. “It was straight out of a movie … I really just feel at the moment we are in this sort of twilight zone.

“We are all doing 14 hour days, but as much as it’s hard, everyone is happy to roll up their sleeves and do what’s needed to be done. There is a new challenge here, and we have had to think outside the square to find solutions, being focused, as if combating a common enemy.”

Tags: and, Busin, calm, keep, on, play
You may also like
Recent Posts