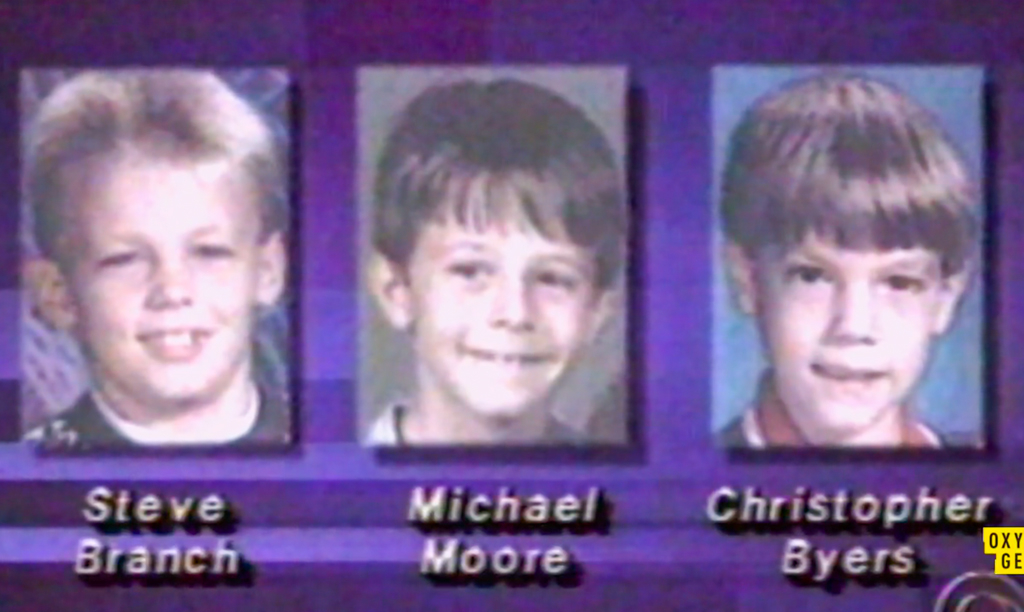 On May 5, 1993, best friends Steven Branch, Michael Moore, and Christopher Byers—all 8 years old and in the second grade—went missing in West Memphis, Ark.

On May 6, the boys’ battered bodies were found in a drainage ditch in Robin Hood Hills. All three had been stripped naked and hogtied with their own shoelaces. Christopher’s genitals had been mutilated.

A month later, three teenagers—Damien Echols, Jason Baldwin and Jessie Misskelley Jr.—were charged with murdering the boys. They were convicted under what can best be described as questionable circumstances, and eventually released after what started to feel like the world had taken up their cause.

So they’re the ones who eventually came to be known as the West Memphis Three.

The efforts, including the media coverage, that went into freeing Damien, Jason and Jessie were tremendous, notes Bob Ruff, a former fire chief and host of the investigative podcast Truth and Justice, which dedicated its fifth season to the 1993 murders as Ruff, his team and listeners pieced together evidence week by week, resulting in real-time updates and analysis as he dug into the case.

“A big part of the reason why this case is now going on 27 years unsolved, a proper investigation should be victim-centered,” Ruff tells E! News. “…What I wanted to do was go back to the beginning, back to the victims, and give them a voice, give them justice, and do a proper evidence-based investigation that starts where it should have begun, which is with the victims.” 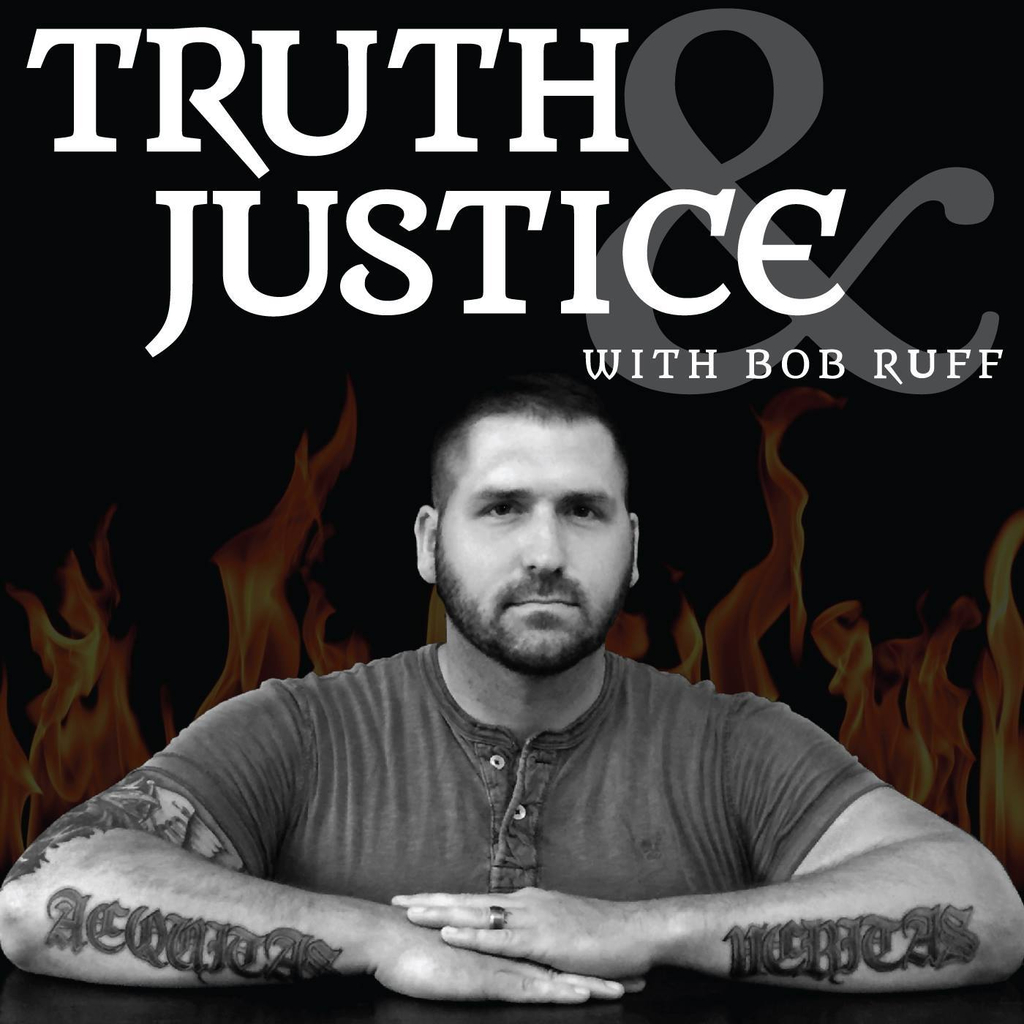 In turn, the new two-part Oxygen special, The Forgotten West Memphis Three, spawned by Ruff’s Truth and Justice investigation, re-focuses the attention back on Steve, Michael and Chris—the ones who lost their lives. 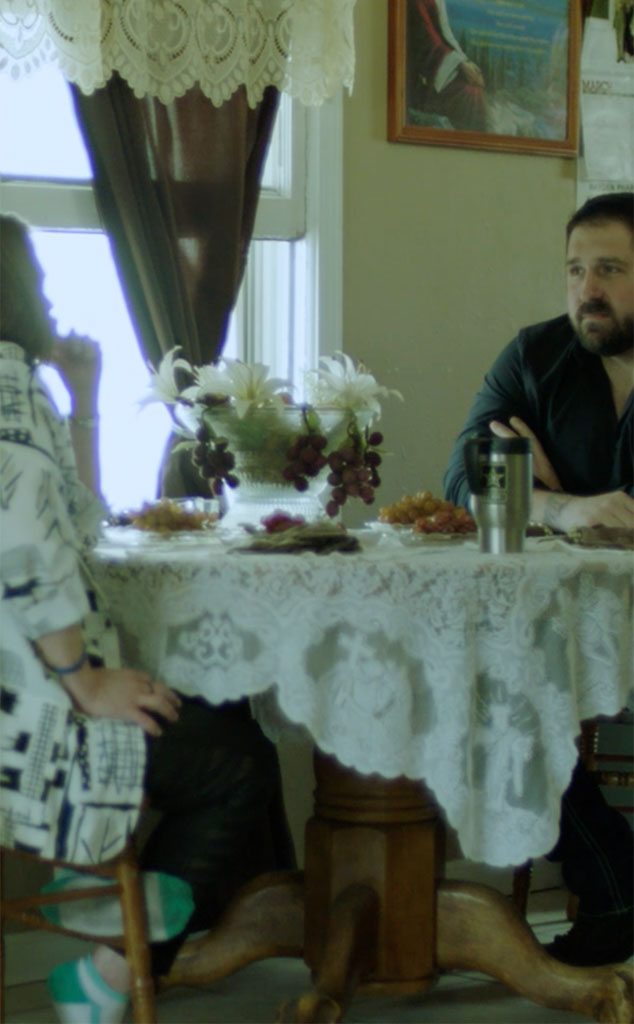 Over the past 27 years, a steady stream of attention has been paid to these crimes, with Joe Berlinger and the late Bruce Sinofsky‘s Emmy-winning1996 documentary Paradise Lost: The Child Murders at Robin Hills being the most well-known definitive account of the killings and the trials that resulted in life sentences for Jessie Misskelley Jr. and Jason Baldwin, and a death sentence for Damien Echols.

Two more films followed, Paradise Lost 2: Revelations in 2000 and Paradise Lost 3: Purgatory in 2011 because, as the filmmakers and the various critics of basically every step of the investigation and the treatment of the defendants along the way suspected—mistakes had been made. 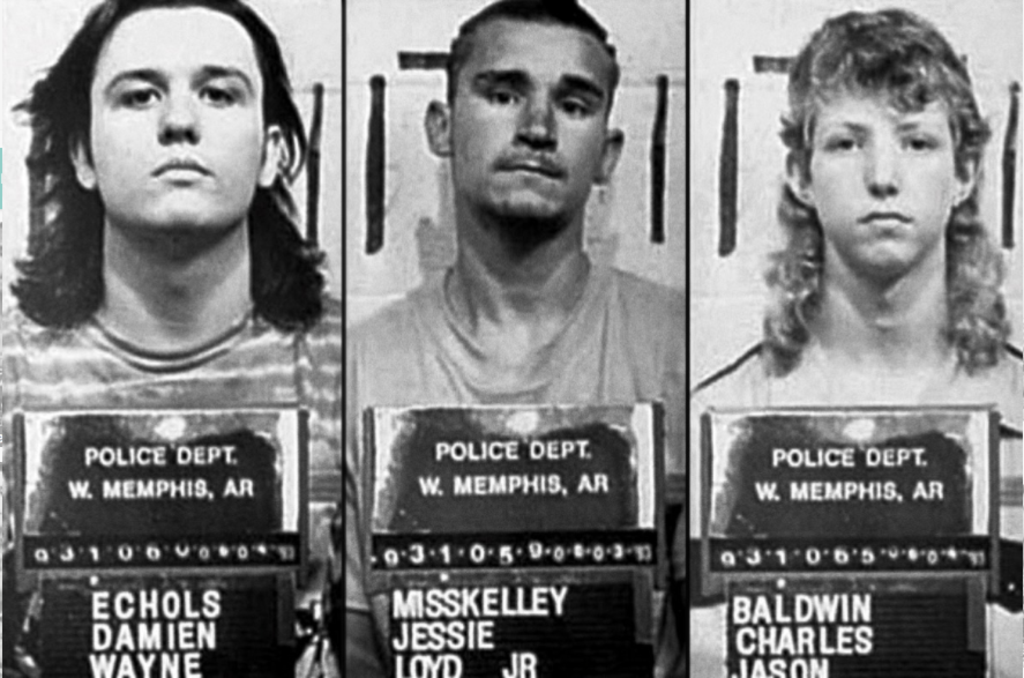 “It looks like Damien Echols finally killed someone,” a juvenile parole officer said at the site where the bodies were found as authorities gathered to collect evidence, according to Mara Leveritt’s 2004 book about the case, Devil’s Knot.

Echols, then 18, was a high school dropout with an arrest record for petty crimes like vandalism and shoplifting, and he had spent time in an institution for mental health issues. That put him on the police’s map, but when combined with his penchant for wearing black, his musical tastes (his beloved Metallica tunes provide an eerie soundtrack in Paradise Lost), and his interest in the pagan religion of Wicca (though his sister said he had considered the priesthood at one point), all served to make him an especially appealing person of interest for the local authorities.

The simple explanation: Echols stood out. He was a weirdo.

He and Baldwin, 16, were best friends. Misskelley, 17, knew them, but they weren’t as close with him. 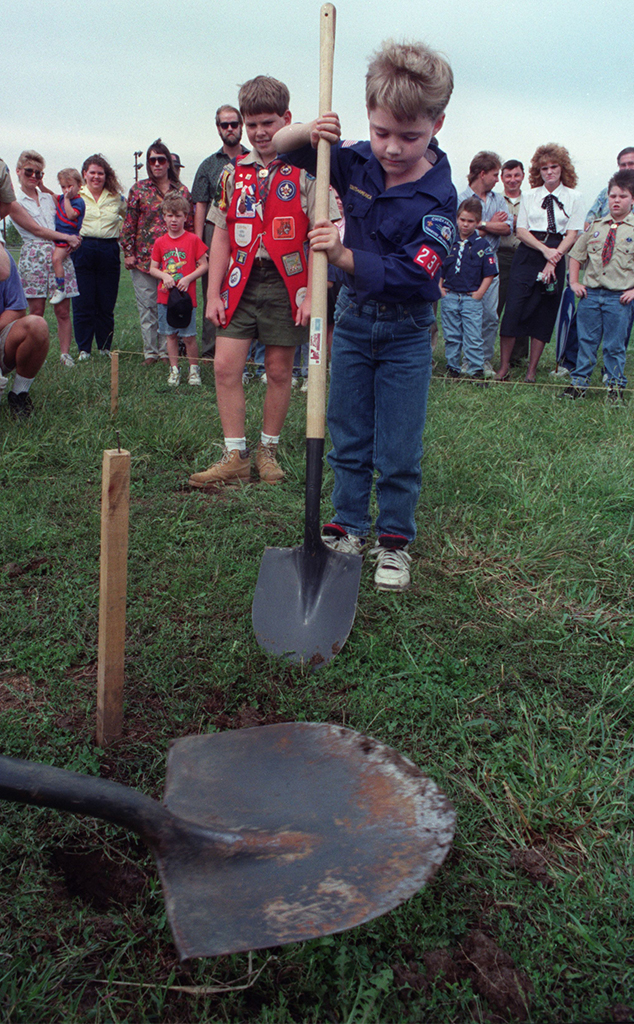 Justice had seemingly handed down swiftly and forcefully for the families of Stevie Branch, Michael Moore, and Chris Byers.

But the convictions were only the beginning of the 15-year-long saga that would result in Echols, Baldwin and Misskelley being released from prison in 2011.

There was the potentially coerced confession. Accusations of jury misconduct. The fact that the young men were convicted without any physical evidence other than a few fibers that couldn’t be ruled out as belonging to other people linking the suspects to the crime scene. That a knife found by divers in a lake behind Jason Baldwin’s house couldn’t be definitively linked to them. The defense teams started poking more holes, starting with objections to how evidence was collected, how long it took police to get the county coroner on the scene, the handling of blood samples and what appeared to be shoddy record-keeping. Bite marks on the victims didn’t match dental impressions from Echols, Baldwin or Misskelley that they were submitted after their convictions.

In the meantime, the Alabama Supreme Court rejected Misskelley’s motion for a new trial, deciding his confession was validly obtained. 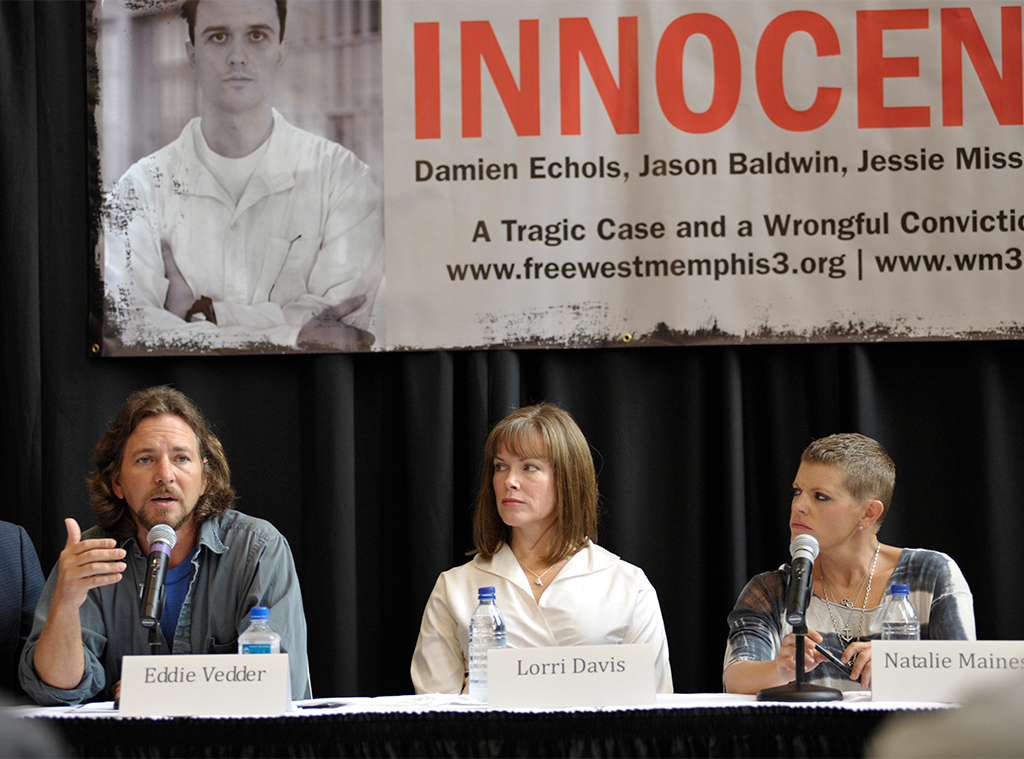 On Aug. 19, 2011, Echols, Baldwin and Misskelley entered Alford pleas—a plea of innocence while acknowledging that there’s evidence to convict them in a court of law—and after spending more than 18 years in prison, were sentenced to time served plus 10 years suspended.

They were free in time for the New York Film Festival premiere of Paradise Lost 3: Purgatory. 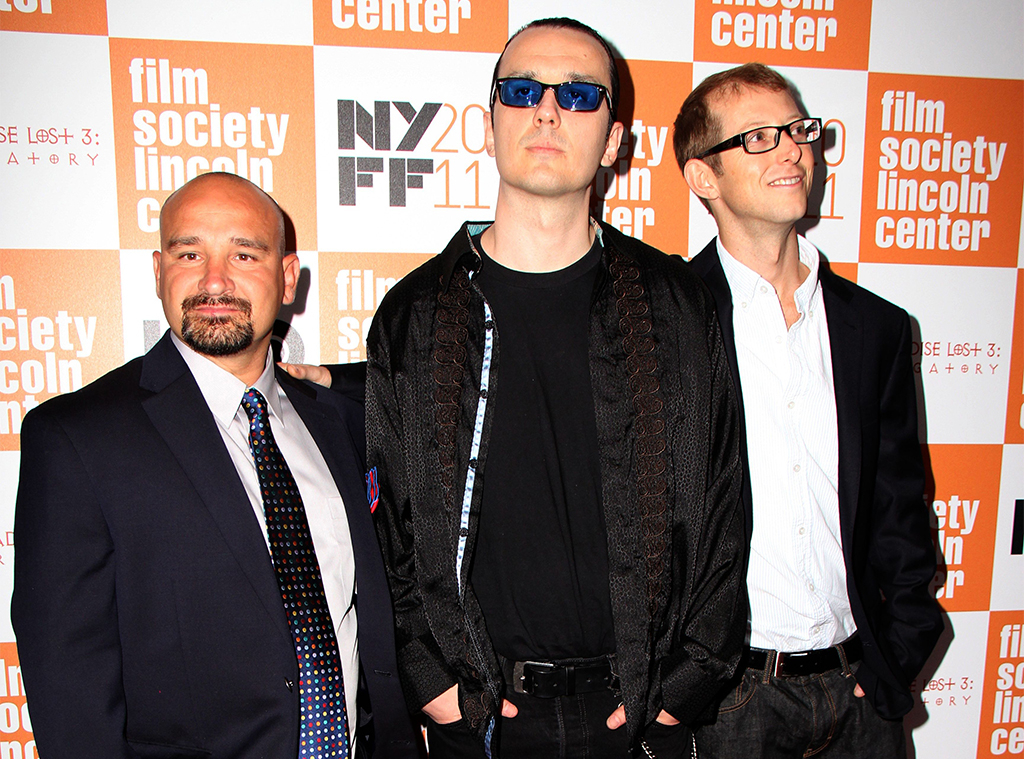 Echols has been married since 1999 to Lori Davis, a landscape architect first wrote to him on death row after seeing Paradise Lost and immediately concluding he was innocent.

They lived in Massachusetts for awhile—in Salem, land of the notorious 17th-century witch trials—before ending up in New York.

Misskelley returned home to West Memphis, ostensibly to go back to living a private life. Baldwin earned his GED and took a few college courses in prison; upon his release a trip to Seattle (his first time on an airplane) turned into a years-long stay, where he pursued his associate’s degree. In 2017 he moved to Texas, where he co-founded Proclaim Justice—a nonprofit dedicated to overturning wrongful convictions—in Austin.

In his 2013 book Life After Death, he described mistreatment he suffered in prison and the unflagging support and resources the three of them received from the Hollywood community.

“Johnny [Depp], Henry Rollins, Margaret Cho, so many people formed a chain and if one single link in that chain was gone, they would have killed me,” he told E! News at the time. “You know just for example, the DNA testing that eventually lead to us getting out, we couldn’t even afford to get that done. Henry Rollins went on a tour just to raise the money to do the first round of DNA testing…If the media doesn’t care, if the world doesn’t care, if people don’t look at it, they’ll still kill you and sweep it under the rug no matter how much evidence there is.”

“The documentary saved my life, saved Damien’s life, and saved Jessie’s life,” Baldwin said on The National Podcast of Texas podcast in 2017. “The state of Arkansas was hoping to do like they do in so many other cases with poor people, with people who are powerless to defend themselves. They wanted to overwhelm us, convict us, condemn us, and sweep us under the rug. And no one would be the wiser.” 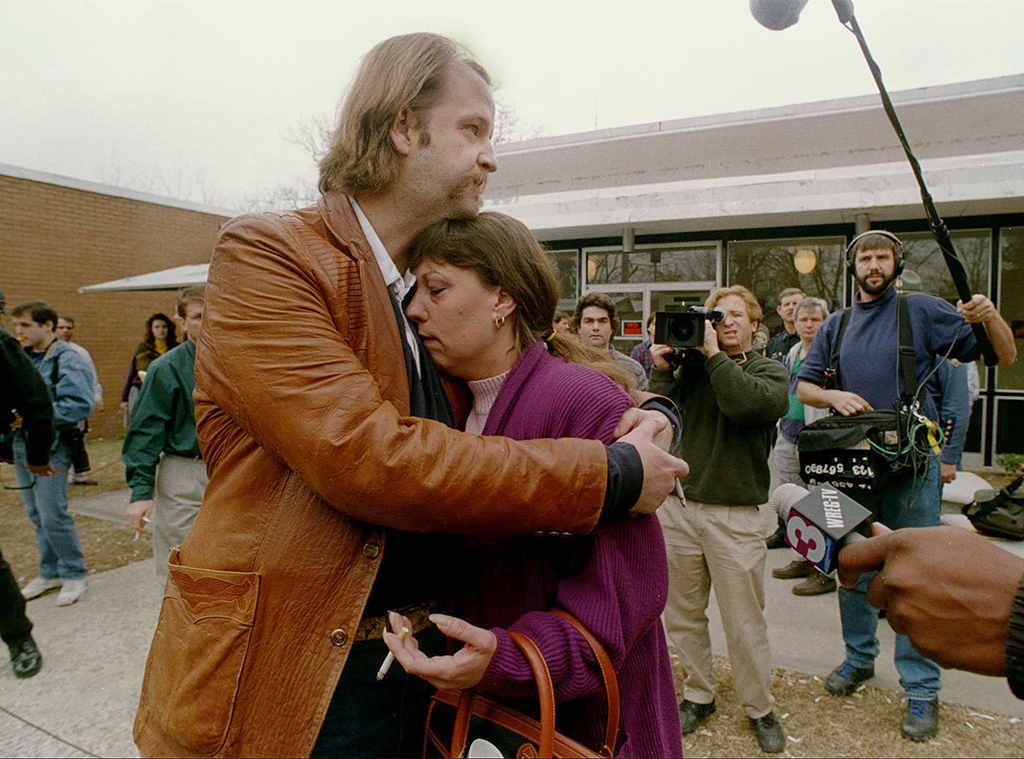 But while that part of the story—regarding what Damien, Jason and Jessie insist didn’t happen on a horrific May day in 1993—had a Hollywood ending, the families of Michael, Steve and Chris have since gone without the small solace that closure can provide.

Three Cub Scouts who liked swimming and karate, Teenage Mutant Ninja Turtles-style. Chris, whose parents set up a tiny Christmas tree at his grave. Stevie, who already had an girlfriend—Michael’s 9-year-old sister, Dawn. A reading grove that was dedicated to them at Weaver Elementary School remains, almost three decades later.

And so Bob Ruff started going over the case with a fine-toothed comb, hoping to find something that was missed the first time around, and during the years when the relentless focus was trained on the hasty convictions and the fight to get Damien, Jason and Jessie freed.

Talking to those family members “makes everything very real,” Ruff told E! News. “When I sat down across from Stevie Branch’s mother and then saw the real emotion in her and the real pain…” Basically, the interviewees weren’t the only ones brought to tears. 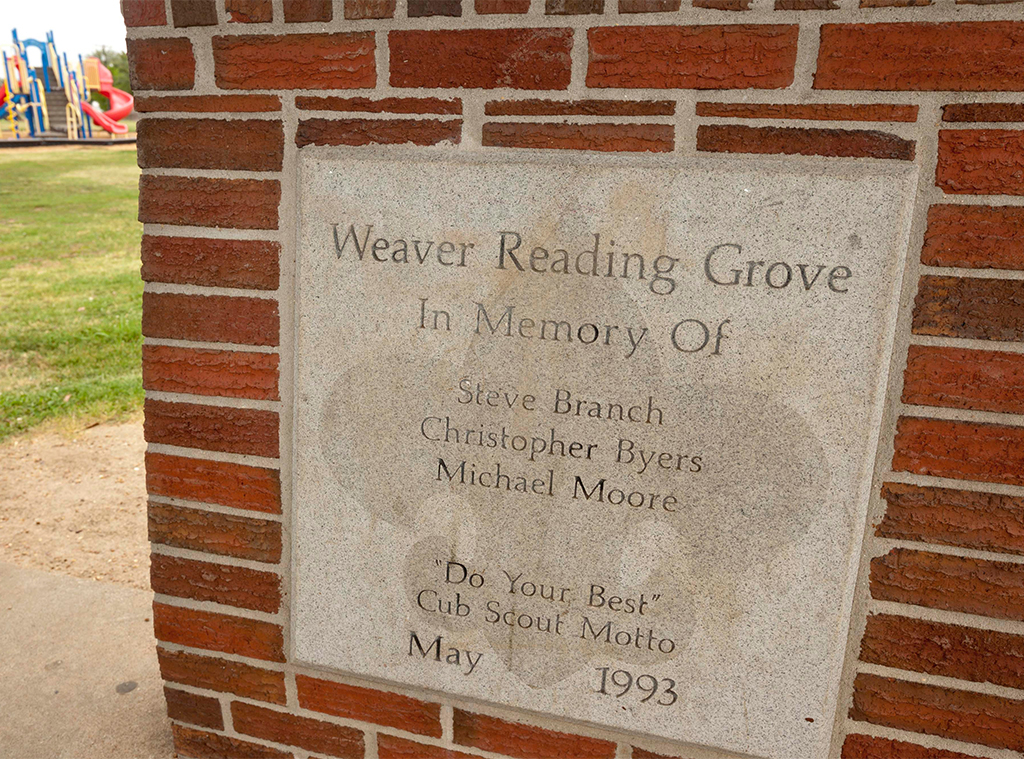 And as well-thumbed as this story is, there was still more to be uncovered—which, without playing coy, Ruff can’t wait for people to see unfold in The Forgotten West Memphis Three, after which Truth and Justice will sift through everything they learned and keep the work going.

“Our investigation through the TV series moves the ball down the field in the investigation further than it’s ever gone,” Ruff says, “and it has us positioned to where, I believe, that we can finally solve this case now.”

Viewers will see something “entirely different” as far as the approach to the investigation into who killed Steve, Michael and Chris, and they will learn new details and hear from witnesses they’d never heard of before.

And “when our series ends,” Ruff says, “the conversation about the West Memphis Three case is going to be completely different moving forward.”

The Forgotten West Memphis Three, a two-night event on Oxygen, premieres Saturday, March 28, at 8/7c and Sunday, March 29, at 8/7c.

(E! and Oxygen are both members of the NBCUniversal family.)