At least nineteen people across Australia have been infected with COVID-19 after coming into contact with passengers allowed to disembark from the Ruby Princess cruise ship in Sydney.

Thirteen passengers were swabbed and tested after exhibiting virus symptoms before the ship docked at Circular Quay on March 19, with four ultimately returning positive results. However, the passengers and crew were allowed to leave the ship before the test results were known. 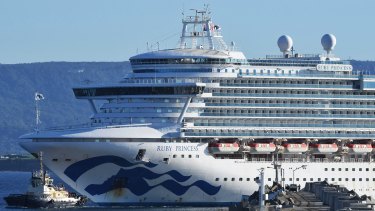 Twelve passengers on the ship have subsequently died from the virus after disembarking, and the circumstances surround the ship's docking are the subject of a criminal investigation involving homicide detectives.

The ramifications of the decision to let 2700 people off the Ruby Princess to board planes, buses and taxis to return home can now be quantified for the first time by the growing number of patients infected by the ship's passengers.

Victoria has reported five COVID-19 patients who are believed to have been infected by passengers on the Ruby Princess, the ACT had two cases and NSW has 12 such patients, including Rideshare driver Julie Lamrock who drove one of the ship's passengers home to Campbelltown.

South Australia reported 85 cases "linked" to the Ruby Princess, but that number includes passengers and their close contacts. Western Australia and Queensland had not broken down their cases by Tuesday night.

James Wood, an applied mathematician from UNSW's School of Public Health and Community Medicine, said the number of human to human transmissions after the passengers disembarked indicated that the community had escaped relatively lightly, assuming all the secondary cases had been picked up.

"The fact that we were already in a light shutdown situation and all those people who were getting off the boat weren't going off to a restaurant with 20 friends probably made a bit of a difference. If for example it had happened two weeks before when we didn't have shutdown conditions it could have been a lot worse."

NSW Police Commissioner Mick Fuller announced a homicide investigation into the cruise ship passenger deaths on Monday amid "many unanswered questions" on whether crew were transparent about the sick passengers.

"There's a high degree of trust that a ship will disclose any issues, particularly biological issues, that they have on the ship," Mr Fuller told Radio National on Tuesday morning.

"There's much more we need to obtain from the ship and the ship records and Carnival's records."

The Ruby Princess is currently docked in Port Kembla to allow access to medical treatment for sick crew and is expected to remain there for 10 days.

NSW Labor leader Jodi McKay wants a public inquiry into the fiasco with the powers of a royal commission.

"Not only is this one of the greatest public health failures in NSW, but it is unfortunately being followed up a cover up," Ms McKay said during a press conference on Tuesday.

Get our Coronavirus Update newsletter for the day’s crucial developments at a glance, the numbers you need to know and what our readers are saying. Sign up to The Sydney Morning Herald‘s newsletter here and The Age‘s here.