A company has been allowed to slash a planned pay rise for its staff to zero because the coronavirus pandemic is jeopardising its business, in a decision other employers are likely to follow.

Attorney-General Christian Porter has also echoed some of the Fair Work Commission's reasoning in a submission to the annual minimum wage review, in which the government called for no increase this year. 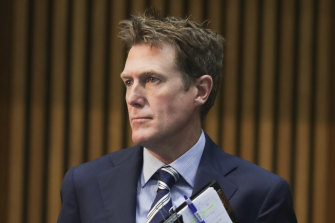 Attorney-General and Minister for Industrial Relations Christian Porter has urged the Fair Work Commission to prioritise jobs when deciding on the minimum wage.Credit:Alex Ellinghausen

"The panel should take a cautious approach, prioritising the need to keep Australians in jobs and to maintain the viability of the businesses, particularly small businesses, that provide those jobs," Mr Porter said.

The submission puts Mr Porter a gulf away from the union movement, which has called for a 4 per cent increase to stimulate the economy by giving more income to the 2.2 million workers whose pay depends national minimum wage.

Dianne Banks, a partner at law firm Gilbert + Tobin, said employers worried about wage increases they had agreed to in better times would also be looking at a decision from the Fair Commission from Thursday.

Staff at CV Services Group, a Queensland construction services provider, had agreed to abandon a planned 3 per cent pay rise that was written into their enterprise agreement because of the coronavirus' "drastic" financial impact.

Even though the government later announced its $1500-a-fortnight JobKeeper scheme, which the electrical union argued meant staff had forgone the pay rise with incorrect information, the commission upheld the bargain.

It decided the government's announcement did not make the employees' consent any less valid at the time it was given.

Ms Banks, the lawyer, said the union also failed to show there was a significant public interest against the pay rise being cut because the company showed it was facing a big drop in job opportunities and supply chain problems.

“We are deeply concerned about setting a precedent that wage increase, once agreed, can be wound back," she said.

John Tuck, head of employment law at Corrs Chambers Westgarth, said more employers were likely to follow CV Services to the commission to ask it to waive pay rises.

But he cautioned employees had to vote to agree to any change to their pay and conditions.

"People have looked in the agreements they've made in different times, and they can vary those by agreement," Mr Tuck said.

"It’ll just start a run on from all employers," Mr Ong said. "Why wouldn’t all employers now line up at the commission to knock off the wage increases that have been locked in?"

CV Services chief executive Andrew McMaster said the company was unsure whether it would be eligible for JobKeeper, which requires companies of different sizes to have lost different revenue percentages ranging from 30 per cent to a half, and only covers some types of employees.

"If it comes through, we will be able to pay our electrical contracting workers the scheduled increase under the enterprise agreement, including backpay," Mr McMaster said in a statement.

Employers and unions have negotiated changes to three major industry awards and the Fair Work Commission is proposing adding unpaid self-isolation leave and a doubling of annual leave at half pay to more than 103 awards covering millions of employees.