All-Star nominee Eoghan McLaughlin plays football like he was born to attack from a Mayo half-back line, but he could easily have been lost to the game forever.

A former All-Ireland Junior cyclist, the polkadot jersey of the king of the mountains was on his back before the green and red, but buoyed on by the success of his local Westport club, McLaughlin parked his bike.

You might imagine that his years of cycling success had prepared McLaughlin for the rigours of football, but making the switch nearly broke the 21-year-old.

“My first year in the International Junior Tour of Ireland in Ennis, I won the mountains jersey. I was delighted. I got full mountain points on the Corkscrew Hill, but I think there is a climb that’s ten times worse, Castle Hill, just outside Doolin,” said McLaughlin.

“I did the junior tour the following year as well. I put my eggs all in one basket and tried to get the yellow jersey, but I didn’t get it. I had the polkadot jersey for four days of the tour, but I lost it on the fifth day.

“Starting to play football, I don’t know if cycling has or it hasn’t helped me. I was a climber so my main objective was to have a big power output, but to be as light as I could to get up the hills as fast as possible.

“When I started playing football I was standing on the scales I was putting on muscle. I was thinking ‘Oh gosh. What’s happening. I need to lose this’.

“It took me a while to understand that you need to put on a bit more weight for football. I wasn’t even going to get round a Junior B game at 65 kilos. I’d be nearly 84 kilos now, that’s since August 2017.” 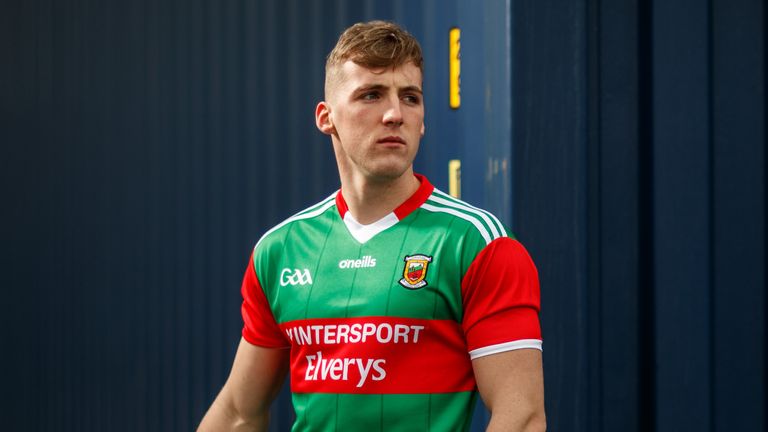 The Sports and Exercise student at UL quickly realised that turning professional wasn’t an option for him, but his decision to go back to playing club football was inspired by an outing to see Mayo play at Croke Park with his friends.

“I remember I went to see Mayo versus Roscommon in Croke Park in 2017. I just went up on the train with the lads on the way to a match. The lads were on to me to go training, and I said I’d said I’d go along for the craic,” he recalled.

“I was in an epsom salt bath for an hour after it. It was different muscles being used. I couldn’t walk after it. When I started going regularly, it took me a year to get used to it. I was crippled after every training session.

“A massive part for me was the club in Westport won the Intermediate All-Ireland [in 2017]. My brother (Oisín) was playing and was starting for the team, he is a year older than me, so that’s sparked me into giving it a go as well. Seeing the local lads that I grew up with, doing so well with the club encouraged me.” McLaughlin’s debut county season ended with an All Star nomination and a defeat to Dublin in the All-Ireland final. It was a heart-breaking blow for the Westport defender, but he says they are bursting to get back to competitive action against Down on 15 May at MacHale Park.

“Last year was a great experience. I’m just looking to build from that and take a few things away from it. Hopefully it will stand to me.

“The All Star nomination was grand. I didn’t really take much notice of it. It was sound. They are only bonuses. I think we all know what the main objective is with the county.”